Presented by the Faculty’s Research Team on Private Justice and the Rule of Law, this lecture kicked off “Stateless Law? The Future of the Discipline,” the Faculty’s international conference on legal education, marking the 10th anniversary of the integrated BCL/LLB program at McGill. 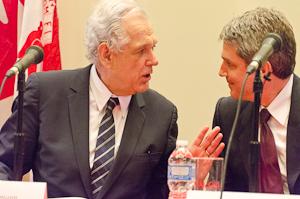 Introduced by Professor Fabien Gélinas (pictured behind microphone) as “a scholar with an eye on practice and a practitioner with an eye on theory,” Professor Bermann’s engaging lecture focused on the relationship between the courts and arbitral tribunals. More specifically, he asked, who should have the primary authority with respect to ‘arbitrability’?

Speaking to a full house of students, professors and practitioners, Bermann explained that the greatest problem—the trap—of ‘arbitrability’ is that the concept itself is subject to multiple interpretations affecting its scope of application. For example, the United States judiciary has treated questions of ‘arbitrability’ as referring to anything from the very existence of an agreement to such matters as limitation periods, often coming into direct conflict with the doctrine (known as kompetenz-kompetenz) that arbitral tribunals are masters of their own jurisdiction.

Bermann raised four central questions: What does ‘arbitrability’ mean; should the allocation of authority between courts and tribunals vary according to circumstances; does it matter when the challenge is heard; and how far can parties go in determining the scope of jurisdiction? 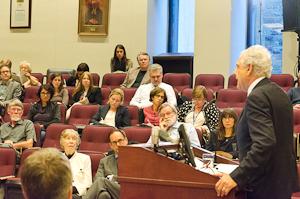 After discussing the solutions provided in various jurisdictions, Professor Bermann’s bottom line became clear: It is a question of balancing legitimacy and consent (the courts) with efficacy and utility (the arbitration tribunals). Ultimately, he said, ‘arbitrability’ needs to be defined coherently and consistently in order to set appropriate policies around the nature and scope of judicial intervention.

While the notion of ‘arbitrability’ remains difficult to pin down, Professor Bermann’s lecture balanced the practical and the theoretical and brought to the fore a key issue in ensuring the continued legitimacy of international commercial arbitration.

This lecture on arbitration was made possible by The John E. C. Brierley Memorial Lecture Fund, established by L. Yves Fortier, which commemorates the life and work of John E.C. Brierley. A Dean of Law at McGill, Professor Brierley was a prominent figure in the discipline of comparative law internationally and the leading Canadian expert on arbitration.