Milhaupt, the Parker Professor of Comparative Corporate Law and Fuyo Professor of Japanese Law at Columbia Law School, is currently conducting research into China’s SOEs, and his July 9 presentation examined problems related to governance and global investment presented by these influential entities. 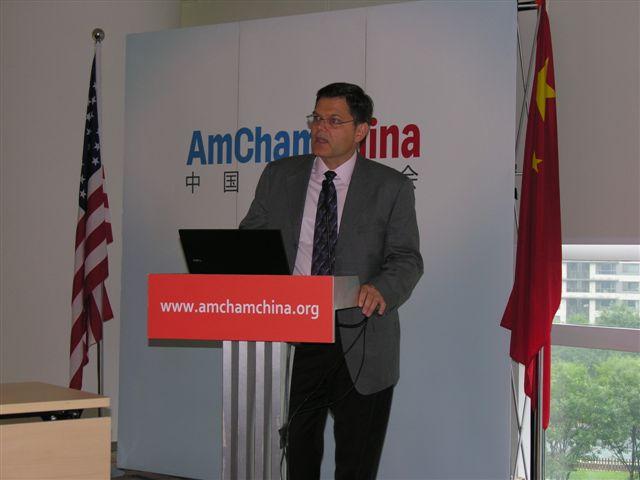 In his presentation, Milhaupt raised questions about the competitive implications of Chinese SOEs for U.S. firms operating in China; how an SOE-dominated domestic Chinese economy affects the emergence of private firms; and whether regulatory institutions in developed economies are equipped to address hybrid business-political actors like Chinese SOEs as they expand into global markets.
The event, sponsored by AmCham China’s Public Policy Development Committee, featured a Q&A session following the presentation that offered guests the opportunity to discuss these and other issues with Milhaupt, whose recent scholarship on SOEs and state capitalism was featured in The Economist earlier this year.
Milhaupt, the director of the Center for Japanese Legal Studies and a leading expert on Asian legal systems and comparative corporate governance, testified this past February before a Congressional hearing held by the U.S.-China Economic and Security Review Commission. The commission was established in 2000 to report on the national security implications of the bilateral trade and economic relations between the U.S. and the People’s Republic of China.