Professor Carol Sanger: Why I Wrote a Book About Abortion 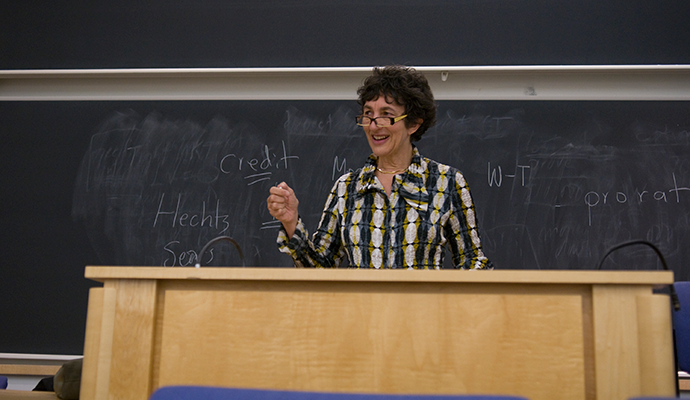 I’ve just written a book called About Abortion: Terminating Pregnancy in 21st Century America. For years I hadn’t wanted to work on the issue of abortion because from an advocacy standpoint post-Casey v. Planned Parenthood, it meant being in a defensive posture, responding to whatever state legislatures had dished out. From a professorial perspective, abortion is most often taught in Con Law, usually in the sequence of privacy cases. This makes for interesting doctrinal lessons, but locating Roe v. Wade chronologically between Griswold v. Connecticut and Bowers v. Hardwick fails to capture abortion as a distinctively woman’s experience—and a highly regulated one at that.

Two events caused me to decide that it was time to step up and take on the subject of abortion more purposefully. The first was my invitation to Olga Dyuzheva, a law professor from Moscow, to lecture in my Family Law class. She said she planned to speak on the four main topics of family law in Russia over the 20th century: marriage, divorce, adoption, and abortion. Surprised at first, her list then struck me as fundamentally sensible, for abortion is at core a decision about family composition, whether to start or add to an existing family. This shifted my thinking about the kind of legal writing that would advance arguments about abortion in addition to constitutional analyses.

The second push was the calm I felt at the beginning of the Obama administration, when, for example, he reversed President George W. Bush’s ban on foreign aid to international family-planning clinics—the ban just reinstated by President Trump. Obama’s policies and appointments offered a respite from worries about Roe’s reversal and a brighter framework for public consideration of abortion. I imagined the security of those eight years stretching into sixteen, although we know that is not how things turned out. Instead we have gone back to the future. During the campaign, Vice President Pence pledged to consign Roe v. Wade “to the ash heap of history where it belongs.”

Nonetheless, my project was on, and I began with the question: Why, as we creep ever closer to the half-century mark of Roe v. Wade, is abortion still regarded as so unsettled, perhaps not illegal but certainly criminal-like? What makes this quasi-criminal status possible? I wanted to present the case that to the extent women feel guilty, ashamed, or reticent to speak about an abortion at the level of personal experience, they might be heartened to know that there is an entire structure of American law and culture aimed at bringing about just that result. Regulations that make abortion feel like a criminal act abound: mandatory ultrasounds and waiting periods; legislatively drafted statements that physicians must read to their patients; adoption brochures, and disclosure about paternal financial obligations. Each of these is intended to bring home to women that before they terminate an unwanted pregnancy they should think again, look harder, and not be so selfish. And if these heedless women don’t get the message before they consent, requiring the burial or cremation of aborted fetal remains is meant to drive it home to them afterwards.

Yet Pence’s threats about Roe to the side, a more immediate attempt to shut down abortion access deserves our attention: the cabining of the important 2016 decision in Whole Woman’s Health v. Hellerstedt (WWH). In WWH, the Supreme Court finally gave real meaning to the language in Casey: It insisted that states had to prove—not just assert—that legislation restricting access to abortion benefitted women’s health. The opinion recognizes abortion as a medical procedure and treats women not as airheads who don’t know what they are doing, but as patients entitled to good care. However, emboldened by Trump and Pence’s assurances, states may start a full court press to distinguish the admitting privileges ruled out in WWH from other types of restrictions, such those that now pass as aspects of informed consent. All such efforts to undermine WWH must be countered with evidence and facts assembled by lawyers and law students working for reproductive justice.

Litigation aside, there is something else that only If/When/How can do. This is to normalize the topic of abortion within law schools and law school curricula. Chapters themselves are a visible sign that the issue is no longer taboo. Lunch events and film screenings are important, not only for their content but for their regularity. They model the possibility of discussing abortion without embarrassment or fear. Family law professors should be encouraged to include reproductive justice matters as part of what they teach. Consider also the approach taken by Vicki Jackson and Mark Tushnet in their casebook on Comparative Constitutional Law, which opens with “Reproductive Rights and Comparative Constitutional Law.” Just as American culture needs more open conversations about abortion, so do law students and legal academics. Weaving abortion into the legal curriculum—rather than treating it like the third rail—is an important aspect of normalizing the topic.

In this vein, I return to the amicus brief filed in WWH on behalf of “113 women in the legal profession who have exercised their constitutional right to an abortion.” As one of the lawyers stated, “To the world, I am an attorney who had an abortion, and, to myself, I am an attorney because I had an abortion.” Journalist Lindy West has started the important “Shout Your Abortion” campaign. The power, skills, and talents of lawyers and law students may be less to shout than to write. Op-eds anyone?

This article was originally published on If/When/How, a national, reproductive-rights group that is made up of law students and legal professionals. Carol Sanger is the Barbara Aronstein Black Professor of Law at Columbia Law School. Her book, About Abortion: Terminating Pregnancy in 21st Century America, will be released by Harvard University Press on March 27.