September 11, 2008 (NEW YORK) – Professor Philip Bobbitt addressed a full room of students and faculty on the subject of international terrorism on the eve of the anniversary of the World Trade Center attacks, challenging the audience to rethink some of its assumptions about war, terrorism and international law. 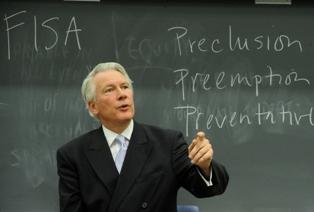 “We used to think victory is the defeat of the enemy like in chess or football. I win, you lose. It’s not so anymore,” he said.
Bobbitt’s wide range of examples to support his thesis that terrorist groups reflect the  organization of the state that they seek to destroy spanned the sacks of Rome and Antwerp to the Barbary pirates, the IRA, the PLO and Al-Qaida. He described the U.S. government as “outsourced,” “devolved” and “privatized,” with an enemy just like it.
His talk, “Can We Combat International Terrorism Consistently with International Law, the US Constitution, and American Values?” was given as part of a speaker series scheduled for the two months leading up to the election. “International Law and Policy Issues Facing the Next President” is organized by Columbia Law School’s Center on Global Legal Problems and presided over by Professor Richard Gardner. Legal experts will discuss such topics as terrorism, global warming, international trade and the pre-emptive use of force.
Bobbitt, who rarely conducts a discussion without at least one literary or art reference chose a stanza from Marianne Moore’s “What Are Years” to underscore his thesis:
What is our innocence,
what is our guilt? All are
naked, none is safe.

“What Kind Of International Agreement Is Possible and Desirable To Deal With The Challenge Of Global Warming?”

“When Should the United States Use Armed Force in Preemptive Self-Defense or Intervene Militarily in Other Countries?”

Speaker: Professor Michael Doyle, Columbia Law School
All lectures take place from 12:05 – 1:00 p.m. at Columbia Law School, Jerome Greene Hall Room 107, located at 435 West 116th Street (bet. Broadway and Amsterdam Ave.), New York, NY.
Journalists, please contact Sonia von Gutfeld at 212-854-1453 or [email protected] if you would like attend.
Presiding over the lecture series is Richard N. Gardner, Professor of Law and International Organization at Columbia Law School.
Speaker Biographies:
Philip Bobbitt is the Herbert Wechsler Professor of Jurisprudence at Columbia Law School. Bobbitt has served as legal counsel to the Senate Iran-Contra Committee, and Director for Intelligence, Senior Director for Critical Infrastructure and Senior Director for Strategic Planning at the National Security Council. Bobbitt is a Life Member of the American Law Institute, and a member of the Council on Foreign Relations, the Pacific Council on International Policy, the International Institute for Strategic Studies and the Executive Council of the American Society of International Law. He has published seven books, most recently Terror and Consent (Knopf, 2008). Bobbitt also serves as a Senior Fellow at the Robert S. Strauss Center for International Security and Law at the University of Texas.
Nicholas Robinson is the Gilbert and Sarah Kerlin Distinguished Professor of Environmental Law and co-director of the Center for Environmental Legal Studies at Pace Law School. Robinson has developed environmental law since 1969, when he was named to the Legal Advisory Committee of the President’s Council on Environmental Quality. He currently is legal advisor and chairman of the Commission on Environmental Law of the International Union for the Conservation of Nature and Natural Resources, engaged in drafting treaties and counseling different nations on the preparation of their environmental laws.
Stuart Eizenstat heads the international practice at Covington & Burling, here his work focuses on resolving international trade problems and business disputes with the US and foreign governments, and international business transactions and regulations on behalf of US companies and others around the world. During a decade and a half of public service in three US administrations, Ambassador Eizenstat has held a number of key senior positions, including chief White House domestic policy adviser to President Jimmy Carter (1977-1981); U.S. Ambassador to the European Union, Under Secretary of Commerce for International Trade, Under Secretary of State for Economic, Business and Agricultural Affairs, and Deputy Secretary of the Treasury in the Clinton Administration (1993-2001).
Michael Doyle is the Harold Brown Professor of International and Public Affairs, of Law, and of Political Science at Columbia University. His principal areas of publishing and teaching are international relations theory, international security and international organizations. His most recent publication is Striking First: Preemption and Prevention in International Conflict (Princeton University Press, 2008), from his Tanner Lectures delivered at Princeton University. Doyle served as Assistant Secretary-General and Special Adviser to United Nations Secretary-General Kofi Annan from 2001 to 2003 and this year was elected chairman of the board of the United Nations Democracy Fund.
Richard Gardner is the Professor of Law and International Organization at Columbia Law School, whose faculty he joined in 1957. He served in the State Department as Deputy Assistant Security of State for International Organization Affairs (1961-65), as U.S. Ambassador to Italy (1977-81) and as U.S. Ambassador to Spain (1993-97). President Clinton appointed him as a delegate to the U.N. General Assembly in 2000 and as a member of the Advisory Committee on Trade Policy and Negotiations from 1998-2001. He currently serves as a member of the State Department’s Advisory Committee on International Economic Policy. His most recent publication is Mission Italy: On the Front Lines of the Cold War (Rowman & Littlefield, 2005). Gardner also serves as Senior Counsel to the international law firm of Morgan Lewis and as a member of the International Advisory Board of Banco Santander.
The Center on Global Legal Problems addresses globalization's legal dimensions through diverse interdisciplinary research and scholarship. The Center, founded in 2003, supports collaborative research with professional disciplines outside of law and with professional schools of business, journalism, public health, and international and public affairs. It hosts periodic conferences and speaker series and supports associations with other Columbia University centers and programs as well as joint programs with international organizations such as the United Nations. The Center’s executive director is Professor José E. Alvarez.
Columbia Law School, founded in 1858, stands at the forefront of legal education and of the law in a global society. Columbia Law School joins traditional strengths in international and comparative law, constitutional law, administrative law, business law and human rights law with pioneering work in the areas of intellectual property, digital technology, sexuality and gender, and criminal law.