Professor Tim Wu told an audience at the inaugural conference hosted by The New Yorker magazine that battles in the next five years over the regulation of technology and access to media will define the future of intellectual property.

Wu, a scholar of telecommunications law, copyright, and international trade, said one key conflict concerns using software to access artistic work, potentially worth billions of dollars. He made his comments at “Intellectual Property: 2012,” one of 13 panels at 2012: Stories from the Near Future.

These clashes, which have spurred recent court cases over media file-sharing software like Grokster and Napster, continue to play out with new programs, such as YouTube, the video-sharing web site recently bought for $1.6 billion by Google. Mainstream content-providers like NBC are approaching new technologies carefully. The TV network made YouTube remove its television programming from the site, but continues to give select clips to YouTube, recognizing the site’s popularity and the marketing benefits of wide visibility, Wu noted.

Over the next five years, this push-and-pull between content-providers and software-designers will shape the dialogue about intellectual property law and its usefulness, Wu said.

Billed as a gathering of “the minds that will make a difference in the coming years,” the 2007 New Yorker Conference covered topics ranging from architecture to environmental entrepreneurship to video game design. Videocasts from the conference, which took place May 6-7, are available here. 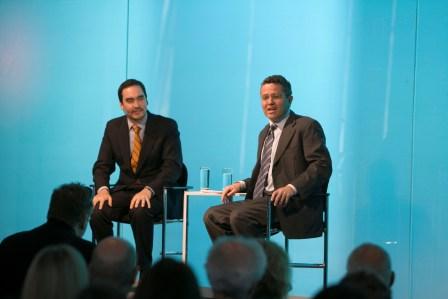