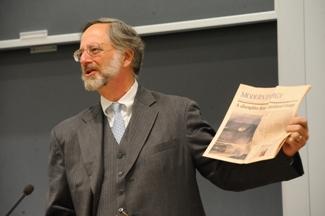 September 23, 2008 (NEW YORK) – “We are going to have a global team effort to create a new economy at the same time that the global investment trading system is collapsing in shambles,” said Nicholas Robinson ’70, Professor of Law at Pace Law School, in a lecture on Sept. 18 as a worldwide financial crisis roiled the stock markets.
The new economy he referred to consisted of the various carbon cap-and-trade systems that have been initiated or are being considered in Europe, Australia, the United States and other countries.
In his talk, “What Kind of International Agreement Is Possible and Desirable to Deal With the Challenge of Global Warming?” he said that while the presidential election has mostly ignored the issue of climate change, countries internationally are having a robust debate about it.
Robinson’s lecture was given as part of a speaker series scheduled for the two months leading up to the election. “International Law and Policy Issues Facing the Next President” is organized by Columbia Law School’s Center on Global Legal Problems and presided over by Richard N. Gardner, Professor of Law and International Organization. Legal experts are scheduled to discuss such topics as terrorism, global warming, international trade and the pre-emptive use of force.
To a room of about 60 attentive students Robinson, a former student of Prof. Gardner, gave an overview of the successes and failures thus far of international environmental regimes and the political dynamics at play during negotiations. He also assessed the environmental issues confronting the next administration.
Robinson said that in 1987, the United Nations-commissioned Brundtland Report asserted that it was “time to do something because we had already launched an irreparable change on the environment,” he said. “But the urgent pace of international development is slow.”
Robinson cited a recent analysis by the League of Conservation Voters that of 2,938 questions asked by journalists of the presidential candidates, only six concerned climate change. “Why have nations gotten stirred up about it if the politicians aren’t?” he asked.
He attributed the United States’ reluctance to participate in international environmental agreements partially to the large size of the nation, which lends it some short-term immunity to the effects of climate change. Small island states such as the Cook Islands and the Maldives, he said, face imminent extinction. Tuvalu, a Polynesian island nation, is already negotiating to move its entire population to neighboring New Zealand.
He recalled a conversation he had with the President of the Maldives, a country which has already started relocating citizens from low-lying to more highly elevated areas. The president said that even this measure wasn’t enough, joking, “You know, we have to hurry on this, because we are short people.”
Touching on the United States’ general resistance to multilateral agreements, he recounted the story of how it was forced to join the international community last December at the Bali Conference on Climate Change. “Previously, Australian Prime Minister John Howard had been President Bush’s only ally in the ‘let’s pretend there’s no climate change’ camp,’” Robinson said, to laughter from the crowd. However just before Bali, Howard was defeated, leaving the United States without an ally.
Calling the Bali agreement “extraordinary,” Robinson said it should eventually lead to a post-Kyoto agreement in 2009 in Copenhagen, Denmark.
Looking to the future, Robinson said, “I can predict a cap-and-trade system. It will be wholly imperfect, but an extraordinary paradigm shift,” he said, adding, “To internalize externalities is better than ignoring them.”
Questions from the audience covered the barrier in negotiations between emerging and developed countries, the possible benefits climate change will bring to some nations and the presidential candidate’s environmental policy proposals.
Robinson emphasized the relevance of climate change to every future lawyer in the room, whether or not they pursue environmental law. “The new international regime for climate change will affect finance, trade and commerce, human rights – every area that you will make your careers in.”
Nicholas Robinson is the Gilbert and Sarah Kerlin Distinguished Professor of Environmental Law and co-director of the Center for Environmental Legal Studies at Pace Law School. Robinson has developed environmental law since 1969, when he was named to the Legal Advisory Committee of the President’s Council on Environmental Quality. He currently is legal advisor and chairman of the Commission on Environmental Law of the International Union for the Conservation of Nature and Natural Resources, engaged in drafting treaties and counseling different nations on the preparation of their environmental laws.
The Center on Global Legal Problems addresses globalization's legal dimensions through diverse interdisciplinary research and scholarship. The Center, founded in 2003, supports collaborative research with professional disciplines outside of law and with professional schools of business, journalism, public health, and international and public affairs. It hosts periodic conferences and speaker series and supports associations with other Columbia University centers and programs as well as joint programs with international organizations such as the United Nations. The Center’s executive director is Professor José E. Alvarez.
Columbia Law School, founded in 1858, stands at the forefront of legal education and of the law in a global society. Columbia Law School joins traditional strengths in international and comparative law, constitutional law, administrative law, business law and human rights law with pioneering work in the areas of intellectual property, digital technology, sexuality and gender, and criminal law.
— Laura Shin