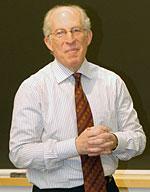 Professor James Liebman spoke to an audience of students on February 28 about his work as the chief accountability officer of the New York City Department of Education, a new post created by Schools Chancellor Joel Klein in efforts to repair the country’s largest public school system. New York’s schools suffer from low test scores, corruption, crumbling infrastructure, and other problems.

Prof. Liebman, who took a part-time leave from the Law School to fill the position, is building on his work during the 1980s on school desegregation law. As a young public interest lawyer, he viewed desegregation as the best solution for what ails U.S. schools, but he now espouses a different strategy.

Prof. Liebman, who served as assistant counsel at the NAACP Legal Defense and Educational Fund from 1979-85, recommends that public interest lawyers think more like corporate lawyers.

“If you’re a corporate lawyer putting together a deal, and you want to protect certain interests in that deal, you want to create different centers of gravity within the organization you’re building that will enable you to get the outcomes that you want,” he said.

“We need to suspend politics and focus on what we agree the problem is. As long as we can solve part of the problem, we ought to do that.” 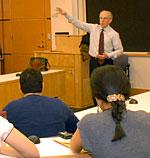 To achieve this goal of incremental progress, the Department of Education is empowering schools so that principals, local administrators, and teachers can act on its behalf, without approval from the city. Balancing this unprecedented autonomy is Prof. Liebman’s accountability system. Schools are no longer being judged on the levels of student scores, but on the progress students make from their baseline level upon entering. This way, an impoverished school whose students are making incremental progress will score higher than an elite school with higher overall grades, but whose students are not demonstrating progress in reading, math, and science. Schools that show progress will be rewarded with funding and incentives. Schools that fall below a certain measure will lose some autonomy or have their principal replaced, and if a school proves itself incapable of succeeding, “We’ll close the school and open another one,” said Prof. Liebman.

“When you say, we’re going to hold you to the best that other schools like you can do, all of a sudden, [there are] no more excuses,” he added. 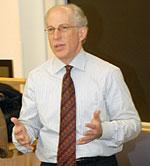 Prof. Liebman, who joined the Columbia Law School faculty in 1985, is now setting his sights on initiatives to persuade school principals to make the current tenure model more exclusive. He is also pushing for equal funding for all public schools. While he traces his drive to the revolutionary ideals of the 1960s, experience has left him with a clear-eyed pragmatism.

To achieve real reform, he concluded, “You want to be as close to the ground as possible. If you came to Columbia to make a difference, look to the nooks and crannies of state and local government.”