Preet Bharara '93, U.S. Attorney for the Southern District of New York, to Address Class of 2013

Preet Bharara ’93 is the U.S. Attorney for the Southern District of New York. In this role, he directs the investigation and litigation of all federal criminal and civil cases within the Southern District, which includes New York, Bronx, Westchester, Dutchess, Orange, Putnam, Rockland, and Sullivan counties.

Bharara was born in Ferozepur, India, and immigrated to the United States with his family when he was a young child. He received his undergraduate degree from Harvard College in 1990 and his J.D. from Columbia Law School three years later. While attending the Law School, Bharara served as a member of the Columbia Law Review. 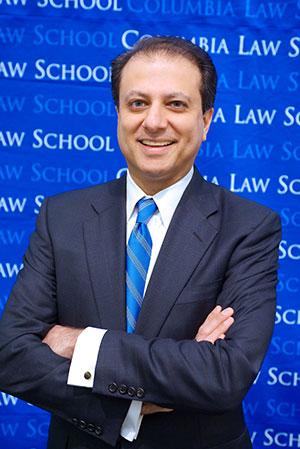 Bharara worked as litigation associate in New York City until 2000, when he was chosen by then U.S. Attorney for the Southern District of New York Mary Jo White ’74 to serve as an assistant U.S. Attorney in her office. For the next five years, he focused mainly on the prosecution of organized crime and narcotics cases.
In 2005, Bharara moved to Washington, D.C., to serve as Senator Charles E. Schumer’s chief counsel on the U.S. Senate Judiciary Committee. He also worked as staff director for the Senate Subcommittee on Administrative Oversight and the Courts, and helped lead the Senate’s investigation into the firing of several U.S. Attorneys during President George W. Bush’s second term. President Barack Obama nominated Bharara to the U.S. Attorney for the Southern District of New York post in May 2009. The Senate unanimously confirmed his nomination, and he was sworn into office that August.
As the Southern District’s chief prosecutor, Bharara oversees more than 220 assistant U.S. Attorneys dealing with a wide range of cases, including those involving terrorism, narcotics, public corruption, organized crime, and white-collar crime. During the past four years, he has received praise for his handling of some of the most high-profile cases in U.S. history, such as the successful prosecutions of arms trafficker Viktor Bout, terrorist Faisal Shahzad, and hedge-fund manager Raj Rajaratnam. In February 2012, Time magazine featured Bharara on its cover, referring to him as the man who is “busting Wall St.” In 2011, he was awarded Columbia Law School’s Lawrence A. Wien Prize for Social Responsibility.

NOTE: The Columbia Law School graduation ceremony takes place on Thursday, May 23 at 3:30 p.m. EDT on the South Field of the main Columbia University campus, in front of Butler Library. In addition, the Law School will be holding a small reception for graduates and their families following the ceremony.