New York, June 7, 2016—Early reviews are extolling the insights of The Burger Court and the Rise of the Judicial Right, the new book by Columbia Law School Professor Michael J. Graetz and Pulitzer Prize-winning journalist Linda Greenhouse. Graetz—the author of seven books, an eminent scholar and teacher, and a former official in the U.S. Treasury Department—is the Columbia Alumni Professor of Tax Law. He has argued before the Supreme Court. For nearly 30 years, Greenhouse covered the Supreme Court for The New York Times. 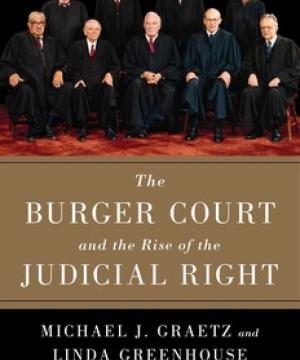 The Burger Court and the Rise of the Judicial Right, published today by Simon & Schuster, challenges the accepted portrayal of the Supreme Court from 1969 to 1986 as pragmatic and accommodating, a moderate or transitional period when “nothing much happened.” On the contrary, explain Graetz and Greenhouse, American law moved to the right with President Richard Nixon’s four appointments to the Supreme Court, including Chief Justice Warren Burger. A new conservative majority reacted to the previously liberal Court under Chief Justice Earl Warren, curbing and rolling back landmark rulings on civil rights and civil liberties, while granting a First Amendment right to “commercial speech,” which would enable businesses to invoke the Constitution in opposition to government regulation. The Burger Court and the Rise of the Judicial Right shows how the Court reached its most lasting decisions, laying a legal foundation for the conservative Rehnquist and Roberts Courts.

“A major contribution to the history of the Supreme Court” is how Kirkus Reviews described Graetz and Greenhouse’s “groundbreaking” book, in a starred review. In another starred review, Library Journal found the book “an insightful and well-researched examination,” and Publishers Weekly called it “the best kind of legal history: cogent, relevant, and timely, given the focus on the Court’s role and power after the death of Justice Scalia."

Elegantly told for a general-interest audience, The Burger Court and the Rise of the Judicial Right was born in seminars the authors led at Yale and Columbia law schools, and enriched by the comments of Columbia Law School faculty. Graetz and Greenhouse consulted the justices’ personal papers to flesh out the lives, thinking, and deliberations behind the Burger Court. Over the course of an argument divided into five parts—Crime, Race, Social Transformation, Business, and the Presidency—Graetz and Greenhouse make a convincing case that the Burger Court’s rulings continue to shape the decisions of today’s Supreme Court.

The Birth of a Conservative Court

In his 1968 campaign for president, Richard Nixon promised to appoint “properly conservative” justices to the Supreme Court, and he selected Burger for his standing as a law-and-order judge, a reputation gained over 14 years on the U.S. Court of Appeals for the District of Columbia.

The Burger Court was tough on crime. It reauthorized the death penalty in 1976, and a decade after that the Court cut off challenges to the death penalty based on disparate racial impact. It limited the power of federal courts to supervise the quality of state court decisions, and added exceptions to the "exclusionary rule," which had made illegally obtained evidence inadmissible, and the Warren Court’s Miranda requirement that criminal suspects be informed of their rights.

“Burger’s Court abandoned the Warren Court’s quest for equal criminal justice,” Graetz and Greenhouse write. “Instead, in the chambers of the Supreme Court, as in the nation at large, protecting the public and punishing the guilty came to the fore.”

Graetz and Greenhouse point out that the Burger Court’s rulings on school desegregation not only failed to integrate schools but closed off other possible improvements. In 1973’s San Antonio Independent School District v. Rodriguez, the Court ruled the Texas public education financing system, based on the collection of local property taxes, did not violate the Fourteenth Amendment's Equal Protection Clause by failing to distribute funding equally among schools. In the following year’s Milliken v. Bradley, the Court said that desegregation measures, such as busing, must stop at the school district’s boundary. Graetz and Greenhouse point out these decisions left poor school districts unable to desegregate or to make a constitutional case for equal state funding.

In 1978 the Burger Court held that racial quotas were unconstitutional in school admissions, but it allowed universities to take race into account for the goal of creating diversity. “By transforming the rights at stake into a university’s right to have a diverse student body,” Graetz and Greenhouse write, the Court’s decision in Regents of the University of California v. Bakke “essentially disabled minority applicants from advancing any legal claim (in the absence of intentional discrimination, of course).” The authors argue that Bakke has set the stage for affirmative action to be struck down by a future Court.

Graetz and Greenhouse use the justices’ papers to describe the deliberations behind the Burger Court’s decisions. In 1973’s Roe v. Wade, the Court allowed women to terminate pregnancies, but the authors found the rights of doctors were the primary concern of three of Nixon’s four justices. Seven years later, in Harris v. McRae, the Court rejected the argument that the government had an obligation to pay for poor women’s abortions, and Graetz and Greenhouse note that today, as some states shut clinics, women without financial resources may be unable to exercise their right to get an abortion.

In 1986, a public health panic surrounded the AIDS crisis, and in Bowers v. Hardwick the Burger Court rejected the claim by a gay man that the constitutional right to privacy should extend to sexual relationships between consenting adults. Criminal sodomy laws remained on the books in more than a dozen states for 17 years, until the decision was overturned in Lawrence v. Texas.

The Burger Court granted First Amendment protection to commercial and corporate speech, bringing powerful forces into political campaign finance. In 1976’s Buckley v. Valeo, the Court allowed unlimited independent campaign spending. A year later, it ruled in National Bank of Boston v. Bellotti that corporations have a First Amendment right to spend money in politics. Graetz and Greenhouse write that these decisions set a precedent for 2010’s Citizen’s United, which removed political spending limits for corporations and unions: “The vast swath of the public that expressed surprise at the Citizens United decision—how can corporations have First Amendment rights?—were obviously unfamiliar with the fact that the Burger Court had decided that question thirty-two years earlier.”

Note: to schedule an interview with the authors, contact Elizabeth Gay at Simon and Schuster: 212.698.7544 or [email protected]