PILF Auction Raises Money For Community Programs
PILF AUCTION RAISES $80,000 FOR COMMUNITY ORGANIZATIONS
Vacation Homes, iPods, and Chandeliers Were Among the Items Up For Bid. 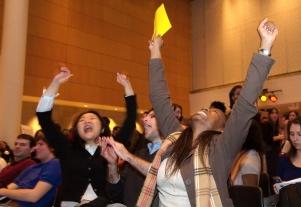 Bidding heats up during the Public Interest Law Foundation auction.

By JENNIFER V. HUGHES
Columbia University’s Roone Arledge Auditorium looked like Sotheby’s on March 6, 2008 as the Public Interest Law Foundation raised $80,000 in its 16th annual Bid for Justice.
Auctioneer John K. Johnson ’08 gave the evening a decidedly legal flair with his banter. When bidding escalated on a pair of tickets to the Broadway show “Young Frankenstein,” he quipped: “Yes, bids can be arbitrary in increments, just like a federal prosecutor.” The tickets fetched $275. 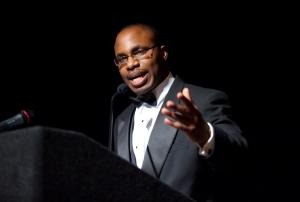 Auctioneer John K. Johnson '08
A $300 opening bid on Professor Jeffrey Fagan’s vacation home in Martha’s Vineyard launched a half dozen yellow paddles into the air. The competition was stiff, and Justin Colannino ’10 drew cheers for his winning $1,000 bid, particularly among those friends standing around him.
“All these guys will go … and now I’m not going to bid on anything ever again,” he said, still flushed with excitement.  Marta Ricardo, ’94, director of Student Organizations and Academic Counseling, was Colannino’s chief competitor for the getaway.
“I would have paid twice as much for it,” she admitted. “But I realized they were in Professor Fagan’s class so I thought it was not very nice to outbid them.”
About 450 people attended the event, which raises money for community organizations and for student stipends in public interest law. Between the live auction and a 100-plus item silent auction, PILF hopes to raise $70,000 this year. 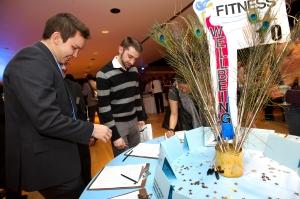 Bidders examine items during the silent auction.
The Public Interest Law Foundation at Columbia is an independent, non-profit corporation of law students, faculty, alumni and friends founded in 1980 that raises money through membership dues, donations, bookstore sales, and the Annual Auction to support and promote the practice of public interest law at Columbia and across the country. PILF distributes the funds as Student Funded Fellowships and Community Grants.
Last year PILF gave $55,000 in stipends to students and another $55,000 in grants to community groups, including a $5,000 grant to the Neighborhood Economic Development Advocacy Project, NEDAP. The organization used the money to purchase a laptop and software to run a hotline for New Yorkers involved in debt collection cases, said Claudia Wilner, NEDAP staff attorney.
Another stipend funded the work of Parker Hutchinson ’09 last summer for the New York Democratic Lawyers Council. He researched pending legislation that might affect election law and voter’s rights.
“I’m really interested in politics and this was a chance to do work that was not necessarily partisan, just for the public good,” he said.
In other auction action, Gretchen Grindle won a $1,000 crystal chandelier, provided by Royal Lighting on the Bowery, for $300.
“I said I’d only go to $250, but the adrenaline was worth the extra $50,” said Grindle, who works for Merrill Lynch and was there with her fiancée, Bryan Hurlbutt ’10. He said that when he helped set up the auction, another volunteer wondered who would buy such an item.
“I said, ‘Oh my fiancée is so going to go for that,’ ” he said, noting that they would probably find a home for it in their bedroom.
An iPhone and two iPods were popular bidding items. So was a weekend in Nantucket, courtesy of Professors Robert and Elizabeth Scott, which generated a high bid of $1,000. The couple has been offering their home for auction for about 10 years.  Bidder Jonathan Reich had offered $950 for the getaway and when the auctioneer tried to goad another bidder to $1,000, it was Reich who upped the amount.
“It’s a good cause,” said Reich, ’07, who now works for Willkie Farr & Gallaher, one of almost two dozen auction sponsors.
Two weekends at Professor Edward Lloyd’s Jersey Shore vacation home won for $1,700 and $1,800.
The item that drew the most quizzical looks was offered by Scott McJannet, ’09, who -- tongue firmly in cheek -- put “My Firstborn Child” on the block.
According to the item description, McJannet would “place his delightful child in your arms and discreetly slip away for 2-3 hours while the baby wicks away all your tension.”  (The fine print indicated: No delight warranties, express or implied and delivery of boy baby or girl baby at discretion of mother, TBA in June.
Dimia Fogan, ’10, took home the prize for a $100 bid.
Still looking a bit confused, she said, “I’m not sure but I think I’m paying $100 to babysit.”
Jennifer Hughes is a freelance journalist who appears regularly in The New York Times and has covered subjects as varied as legal affairs and real estate to entertainment and children's issues.