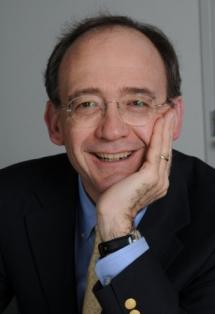 May 2, 2008 (NEW YORK) - Columbia Law School Prof. Philip M. Genty opened a recent session of his Professional Responsibility class with this:“A victory for one of us is a victory for all.”
He then bestowed public kudos on several students for their success in other venues. He congratulated Davis Scherr ’09, for instance, on making the final round of the Harlan Fiske Stone Moot Court Competition. That kind gesture is typical of Genty’s treatment of students, both in and outside the classroom.
“He’s probably the kindest, most compassionate professor I’ve come across in the Law School,” said Alison Wright ’08, who has taken two Genty courses and worked with him on this year’s moot court program. “He’s genuinely interested in the students and what they have to say.”
The Class of 2008 returned the kindness this year, bestowing Genty, a 19-year veteran of the Law School faculty, with the 2008 Willis L.M. Reese Prize for Excellence in Teaching, an annual acknowledgment by the graduating classes for gifted teaching. Genty will speak at the Law School’s graduation ceremony May 22.
“He really is a soul – so generous of spirit,” said Susan Ashley, Dean of Colorado College and one of Genty’s role model teachers when he was a student.
“To my mind this is the highest honor I can get as a faculty member, in part because it comes from students, and in part because it recognizes the thing I care most about, which is teaching,” Genty said. “It’s a very good thing when teaching gets recognized in a university setting.”
Genty extends his passion for good teaching well beyond Columbia. He has helped law schools in Central and Eastern Europe develop their clinical programs. He spent several days in April in the Czech Republic, and last October he participated in a conference in Poland on ways to improve legal education throughout Eastern Europe.
Genty said he has based his own teaching style on several professors, including Colorado College’s Ashley, because “they ran very discussion-oriented classes and created an environment where you felt you were living through the subject matter. I think the best experiences I had as a student were when we had a sense of community and a lot of interaction. That’s what I’ve tried to foster in my own classes.” 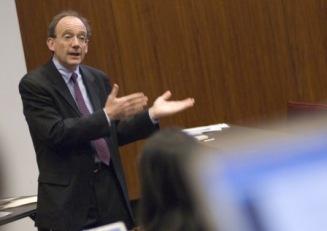 To do that, he said, a professor needs a clear plan in advance which outlines what specific points he wants to cover in each class, and how these fit into the broader course goals.
“But then you have to be able to hang back and let the students carry the discussion,” Genty said. “You have to give up a little control, which is always hard for us as teachers.”
A recent performance in his Professional Responsibility class bore that style out.
He started with a discussion of the balancing act a practicing lawyer has in meeting multiple goals. “The ends belong to the client, and the means belong to the lawyer in consultation with the client,” Genty said. “That’s easy to state but hard to apply, especially in public interest law.
“You have to learn the client’s goals, and in public interest law, you often have to overcome the client’s fear about whether you are really with them of part of the welfare structure. All of that takes time, which is a scarce resource, and you could be taking that time away from other clients,” he said.
The students started to discuss a sample case, that of an elderly legal services client with an approaching trial date who has been reluctant to decide how to proceed. Genty subtly teased out opinions from students about how to handle the case.
At one point, he asked the group, “So would you feel comfortable settling the case?”
As he listened to student discussion, Genty walked up and down the aisles of the lecture hall. He stopped, put his hands on hips, listened, put his index finger under his chin, walked, listened, put his hand on his forehead. 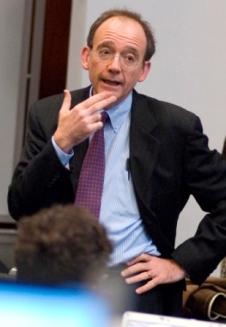 “So what do people think of the guardianship idea?” he asked after one student suggested that option for the client. Then he asked, “Would anyone take this to trial?” And a little later, “How about the way this client is going to be portrayed by the press?”
As students debated, Genty smiled and said, “I’m going to lock several of you in a room together to argue this out!”
Alison Wright said Genty knows everyone’s name by the first day of class. “It’s easy in law school to slide under the radar, but he makes sure you don’t,” she said. “He really wants you and your opinions to feel valued. He tries to engage every student.”
Genty ended the recent class by showing key scenes involving a lawyer from the 1959 movie “Anatomy of a Murder,” starring Jimmy Stewart and George C. Scott “It doesn’t get better than this,” Genty said.
One scene involves Stewart’s character and another lawyer looking up old decisions in a law library. Afterwards, Genty elicited laugh from the class when he said, “It’s a three-hour movie, but this legal research scene is definitely the high point.”
***
In 1970, Colorado College adopted the Block Plan, where students take a single course at a time for three to seven weeks, meeting each weekday for about three hours, focused only on that subject.
Genty, a Colorado native, enrolled at Colorado College a few years after the Block Plan was established. Ashley said that because students are so focused on one subject, and cover so much material, they come to class each day “with a lot in their heads. It’s a very consuming, tiring and satisfying experience. I tried to figure out the questions to ask to help them get to the heart of the material on their own.”
She said Genty “was very quizzical. He was particularly good at attentive listening and helped draw out his fellow students in class discussions. He was a connecting presence.
“His personality is a little impish and very modest but not at all retiring. He was always very engaged in the material,” Ashley said. “I remember how ardent he was about getting to the bottom of issues. There was a lot of discussion about the ambiguity of morality.”
After graduating in 1977, Genty enrolled at New York University School of Law. There, he hooked up with students who took a keen interest in the issue of women in prison. An NYU professor who influenced him deeply was Carole Shapiro, now deceased, who ran the clinic he enrolled in.
Genty tended towards public interest work, he said, because of “wanting to do something with low income people combined with an intellectual interest in criminal law. I came to feel working with prisoners or family issues would be more interesting that straight criminal defense.”
The choice reflects the values he said his parents instilled in him. His mother, Susannah, was a third and fourth grade teacher in Pueblo, Colorado. His father, Francois, was a journalist and director of public relations for the CF&I Steel Corporation, and did some counseling in the local community corrections program.
“My mother died when I was fairly young, but both my parents gave me a sense of having a real and larger purpose in one’s work,” Genty said. The trait runs in the family. Genty’s brother, Marc, who works at the National Center for Atmospheric Research in Boulder, Colorado, volunteers with the homeless and in local hospitals.
While at NYU Law, Genty also met his future wife, Judith Waksberg, as they worked on a welfare rights project. Waksberg is now director of the appeals unit in the Juvenile Rights Practice at the Legal Aid Society of New York. Genty and Waksberg have three children: Harry, 20, is a junior at Tufts; Susannah, 18, is a freshman at Columbia; and Alexander, 14, is in the 9th grade.
Genty earned his law degree from NYU in 1980, then worked as a staff attorney with Prisoners’ Legal Services of New York for two years. In 1982 and 1983 he was a research analyst in the Mayor’s Office of Operations, and in 1983-84 he was a staff attorney for the New York City Department of Housing Preservation and Development. He became staff attorney at the Bedford Stuyvesant Community Legal Services Corp. in 1984, and in 1987 made the jump to academe, as an instructor of law at Brooklyn Law School. He taught there until 1989, when he joined the Columbia Law School faculty.
***
“It’s important for students to feel their classroom experience is valuable, a good use of their time, and not something that could have just as easily been done outside the classroom,” Genty said. “I want to be creating a sense that people’s presence and their voices matter.” 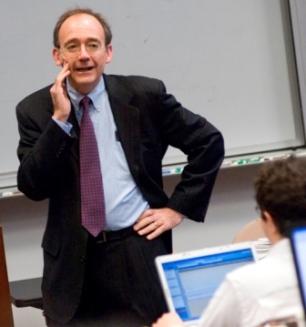 To help spark discussion, Genty has students write short essays on various topics during the semester. “I’ll read their opinions, and then synthesize what they’ve said into the discussion plan, and go around the class and draw on students’ input based on what they have written,” he said. “It’s a way of structuring the discussion, and you get at the richness of views that everyone brings with them to class.”
Genty teaches a Professional Responsibility course and a first-year Lawyering Skills course. He also directs the Prisoners and Families Clinic and the Moot Court program.
The clinic work, he said, is particularly rewarding. “It’s a small group who have affirmed their interest in work that’s emotionally difficult. Their clients have often gone through hard experiences, they have pressing legal needs, and usually they’re not easy cases to win. The odds are not good and the clients often feel a sense of desperation and hopelessness.
“It’s gratifying that you can give them a sense of hope,” he said.
The students learn not only how to handle a case, but other vital lessons about the law.
“They can do a lot of prep and still don’t know how the case is going to unfold. You’re often confronted with unanticipated situations. There are times when I don’t have the answer myself and the sense that we’re doing this together is very exciting,” Genty said.
“It shows the students what’s hard about the law – that there aren’t always clear answers.”
To read Prof. Genty's acceptance speech at the 2008 graduation, Click Here.
To read the remarks that Alison Wright '08 made during graduation when presenting Prof. Genty with the Reese Prize, Click Here.