Paul Smith ?12 Awarded Best Oral Advocate and Best Brief at Harlan Fiske Stone Moot Court
Media Contact:
Public Affairs Office 212-854-2650 [email protected]
New York, April 13, 2011—The annual Harlan Fiske Stone Moot Court Competition at Columbia Law School is as much about showcasing legal advocacy skills as it is a severe test of staying cool under pressure. That is no small feat when a justice from the nation’s highest court is among those firing away with questions.
But the four competitors in the April 7 finals left no doubt they had passed that test, according to U.S. Supreme Court Justice Sonia Sotomayor. She was one of three judges who comprised what Sotomayor acknowledged was a “hot bench” that constantly challenged and engaged the finalists.
“When I see performances like the ones you rendered, then there is hope for my profession,” Sotomayor said.

Distinguished judges from the U.S. Court of Appeals for the Second Circuit completed the bench: Denny Chin and Debra Livingston, who is also the Paul J. Kellner Professor of Law at Columbia Law School.
“I speak for all of us when I say what a tremendous job you did,” Sotomayor told the students, in front of some 400 people who packed two combined classrooms in Jerome Greene Hall. Others watched the final on a video feed in other classrooms.
Paul Smith ’12 (right) was named by the judges as the recipient of the Lawrence S. Greenbaum Prize for best oralist in the competition. The award, established in 1951, is named after a member of the Class of 1912. 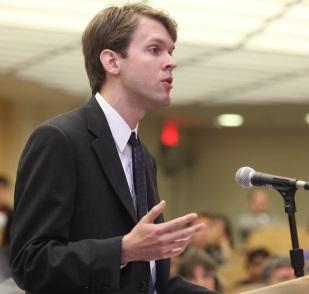 “It was high pressure up there. It was intimidating,” Smith said. “They knew the problem well enough that it was a real conversation. There was a real dialogue, which was nice, being able to engage somebody who knew the law a million times better than I did.”
Smith, a native of Kinston, N.C., was also cited by the Moot Court Executive Board for having the best brief in the competition’s final round.
“It’s reaffirming to know that I can do this,” said Smith, who will work for the North Carolina public interest law firm Patterson Harkavy LLP  this summer. “I wanted to go in and feel good about how I did more than I wanted to win. I wanted to feel the work I put into it was evidenced by my performance.”
The final arguments were for the fictional case of Haywood v. McKenna, which dealt with two questions: whether a federal court could grant a habeas corpus petition to someone innocent of a crime for which they have been convicted and sentenced to life without parole; and whether the imprisonment of a mentally retarded person for life without parole—in this case, rape—is cruel and unusual punishment and thus barred by the Eighth Amendment.
Smith argued for the respondent, along with Prashanth Chennakesavan ’11. Arguing for the petitioner were Matthew Kuhn ’11 and Anjali Bhat ’11.
The final was part of a busy day at Columbia for Sotomayor, 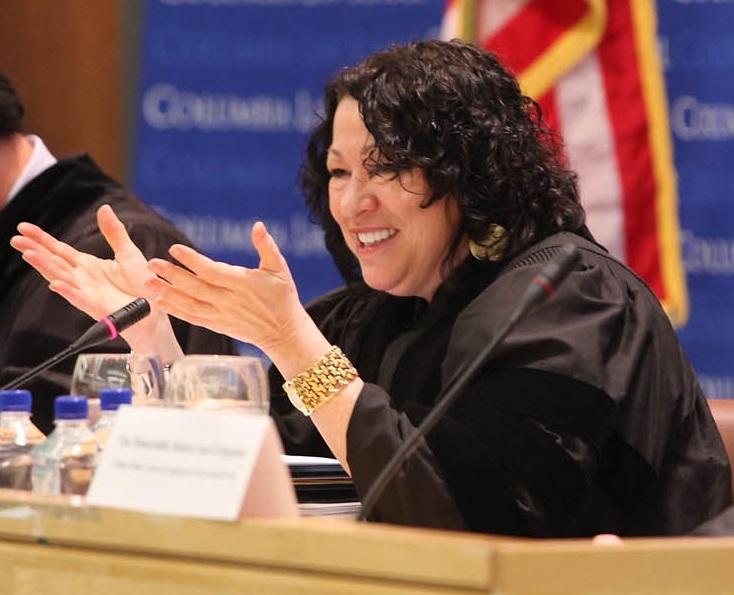 who was a Lecturer-in-Law at the Law School in past years, overseeing the Federal Appellate Externship. Earlier in the day she met with faculty over lunch, spoke to the Latino/a Law Students Association, answered an hour-long series of questions from students, and attended an evening reception for moot court participants and guests.
The competition— named after a Supreme Court justice and graduate of the Class of 1898—last hosted a member of the Supreme Court in 2008, when Chief Justice John Roberts presided.
Sotomayor also praised Evie Spanos ’11, the competition director and case author who was a finalist last year. Spanos was part of the Moot Court Executive Board with Danielle Hemple ’11 and Roshni Banker ’11. Professor Philip Genty is the faculty director.
The Stone Moot Court is a three-round elimination competition of appellate advocacy. This year, 90 students entered the first round held during the fall term. More than 125 alumni, many of whom participated in the competition as students, returned to the Law School to judge the preliminary rounds of the competition.
The program is made possible by a grant from Milbank, Tweed, Hadley & McCloy LLP.
# # #
Columbia Law School, founded in 1858, stands at the forefront of legal education and of the law in a global society. Columbia Law School joins its traditional strengths in international and comparative law, constitutional law, administrative law, business law and human rights law with pioneering work in the areas of intellectual property, digital technology, sexuality and gender, criminal, national security, and environmental law.
Visit us at http://law.columbia.edu
Follow us on Twitter http://www.twitter.com/columbialaw