Press contact:
James O'Neill: 212-854-1584 Cell: 646-596-2935
[email protected]
October 12, 2007 -- New York -- The first year of the new conservative Roberts Supreme Court gave liberal advocates a lot to worry about -- but it was not everything the new chief justice had hoped for, either. So said panelists at the 13th annual “Supreme Court Roundup” hosted by the Law School’s Social Justice Initiatives on October 9.
“Roberts came to the Court with representations: an increased workload, to strive for consensus in decision making, promote collegiality and respect precedent -- and none of these things happened last year, said Steven Shapiro, legal director of the American Civil Liberties Union. The Supreme Court decided 72 cases after full argument. Twenty-four of the 72 were split 5/4 decisions and Kennedy was the swing vote in every one of those cases.
“By the end of the term the court was fractured and bitter,” Shapiro said. “They trampled precedent… The way they handled precedent [gave] the feeling that they were playing fast and loose with the past cases.”
Shapiro was one of four speakers at the Roundup, which included Nancy Northup, president of the Center for Reproductive Rights and an adjunct professor at Columbia and NYU Law Schools; Professor Kendall Thomas, founding co-director of the Center for the Study of Law and Culture at Columbia University, and Marianne Engelman Lado, general counsel to the New York Lawyers for the Public Interest. 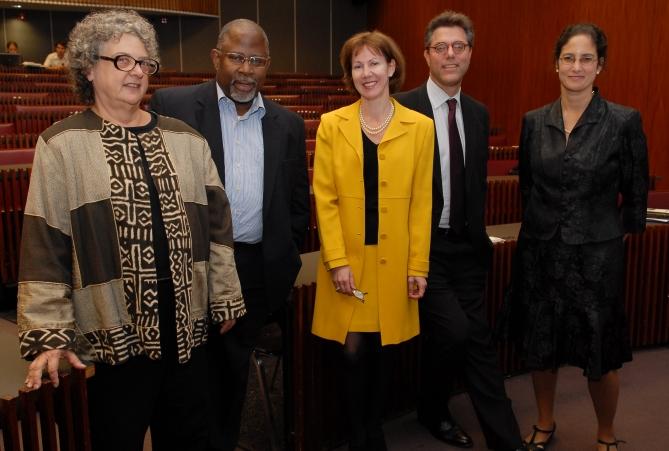 The round-up panelists were (left to right) Ellen Chapnick, Professor Kendall Thomas, Nancy Northup, Steven Shapiro, and Marianne Engelman Lado.
Many cases decided on technical or procedural grounds quietly narrowed the scope of certain rights without creating a galvanic public response, panelists agreed.
Northup said the Court’s decisions on two abortion cases last year, Gonzales v. Carhart and Gonzales v. Planned Parenthood, were“a definite step back” for abortion rights.  Thomas said the Court’s decisions in two school-related cases broke with the precedent set by Brown v. Board of Ed byfavoring school desegregation. (Those cases were Parents Involved in Community Schools v. Seattle School District and Meredith v. Jefferson County Board of Education.)
Lado said the Court’s ruling in Ledbetter v. Goodyear Tire and Rubber Company could limit the access discrimination cases have to the courts if claims weren’t filed with the Equal Employment Opportunity Commission (EEOC) in a timely manner. In this case, Ledbetter had claimed sex discrimination in her compensation, which was significantly less than the next lowest-paid manager. An appeals court and the Supreme Court ruled against her, stating that because the pattern of discriminatory salaries challenged here originated before the Civil Rights Act made their payment illegal, the earlier pattern could not be considered.
Lado said that the Court’s decision is problematic because pay disparities often occur in small increments, comparative information is often hidden from employees, and small initial discrepancies become bigger over time, as salary increases are based on percentage of pay.
Congress has already passed a bill that would overturn the decision as it affects Ledbetter, Lado said, adding that the logic used by the Court would have the greatest impact on race discrimination cases.
During the Q&A students questioned whether liberal advocates should continue to risk litigation, when they are faced with such an unfriendly bench.
The speakers concurred with each other that litigation remains an important tool for building a just society.
“You don’t give up on any forum,” Northup said. “At the same time, we have to get smart about what [cases] we’re bringing and how we can influence around the courts.”
Lado urged people not to give up on the justices. They “have a sense of rightness and fairness that you don’t expect,” she said, referring students to judicial speeches and court transcripts which are available online.
Asked to characterize the new court’s philosophy, speakers described it as “corporate and state-ist.”
“I don’t think it is libertarian or states rights,” Shapiro said. Lado added that there is much debate within right-wing politics. Northup expressed concern that the court is “outcome determinative.” Thomas said it is “a court that operates by stealth, and so it’ll be pretty hard to tease out the magnitude of some of the changes.”
“It’s very important not to become discouraged and to believe that you can make a difference, even if that means sticking your finger in the dyke for awhile to make sure things aren’t going to get worse,” Shapiro said. “The best legal career you can have is a career devoted to promoting civil rights and legal rights and human rights. I think it’s a fight that, in the end, you’re going to win.”