Her Two-Day Visit Included a Speech on Democracy and Terrorism
By Erin St. John Kelly
November 15, 2007 (NEW YORK) – Retired U.S. Supreme Court Justice Sandra Day O’Connor called the system of elected judges in New York and many other states “a form of corruption,”  and issued a pointed challenge to Columbia Law School’s professors and students to fix it.
“There’s too much cash in the courtrooms and we need to get it out,’’ O’Connor said during a visit to Columbia Law School this week “You’ve got a mess in your lower courts in New York. Why don’t you clean it up?” 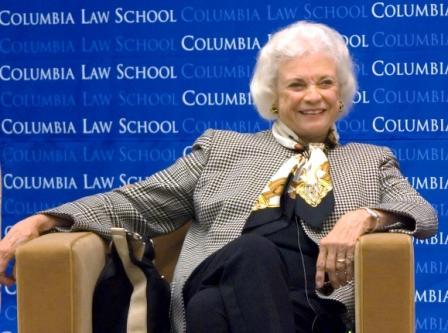 O’Connor’s two day visit at Columbia Law School on Nov. 11 and 12 included a speech to an overflow crowd of more than 400 people on the role of the courts in an era of terrorism, as well smaller, intimate exchanges with groups of students and professors. She also accepted the Wolfgang Friedmann Memorial Award from the Columbia Journal of Transnational Law for the role she plays in international affairs.
“These were two magnificent days for us,” Dean David M. Schizer said.
O’Connor gave high praise to the lawyers in Pakistan who have risked their freedom and lives protesting martial law there, expressed regret at the homogenous legal background of the members of the U.S. Supreme Court and said that we are likely at the beginning of the war on terror, rather than the end.
O’Connor, the first woman to sit on the U.S. Supreme Court, gave the Harold Leventhal Memorial Lecture, Balancing Security, Democracy, and Human Rights in an Age of Terrorism, on November 12. “There is perhaps no end to the conflict,” she said, which would pose unprecedented difficulties for the courts, particularly with regard to indefinite holding of prisoners captured during the war on terror. “I don’t know how we’re going to deal with that,” she said.
During O’Connor’s time with students on November 13, she fielded questions on case law, states’ rights, and her participation in the Iraq Study Group. She also advocated better pay for judges — so the judicial system can better compete with law firms to attract the best lawyers. She said she is not optimistic it will occur as long as judges’ pay is tied to that of the members of Congress.
And though she was clear in all her forums that she would not be a critic or predictor of the current court she did tell the students, “I do regret that we seem locked into a system where we get judges only from the courts of appeals. It’s good for the country to have more diverse backgrounds on the Supreme Court.” The justice’s final words to the students were, “Study hard. Go change the way they elect judges.”
Mukul Bakhshi, 3L, was one of the lucky students who won the lottery to meet with the Justice. “It was really interesting to hear her on a wide variety of issues in such an intimate setting,” he said.
O’Connor told an assembly of professors that Supreme Court justices are influenced by amicus briefs. “Sometimes you really need the help, and professors can shed light on things,” she said. When asked by one professor about affirmative action, she said, “Keep speaking up and out. Use your voice.”
In all the forums she expressed her dismay at martial law in Pakistan and her unreserved approval for the lawyers who are protesting there. “It was quite impressive,” she said. “They put on their white shirts, their neckties and jackets to go out there and get beaten-up as an expression of their concern over what was happening to their constitution.”
O’Connor lit-up when discussing her participation in the Iraq Study Group. “It was endless but fascinating,” she said. She expressed disappointment that the administration did not adopt the findings of the bi-partisan Group, but she said of the experience, “I was so pleased that we were in accord with so many of the issues.” She also said that the only “sticky” issue was the timing of a withdrawal of U.S. troops from Iraq.
The Justice said she had learned pragmatism in her childhood on a ranch, of coming up with “solutions that may not be beautiful, but that work.” She also defended against allegations that her childhood horse, Chico (small, but with “good cow sense”) on the cover of her autobiography, The Lazy B, was merely a pony. The self-proclaimed “unemployed cowgirl” was an idiosyncratic combination of practical and prosaic. “Our best hope for world peace,’’ she said, ``comes from the rubric rule of law.”
Most emphatically and repeatedly during her stay at Columbia Law School O’Connor railed against the partisan election of judges. “How is it we don’t stand up and say we’re not going to do this anymore?” she asked. Nor did she spare her host’s state. With a lifetime of  belief in the power of lawyers she told the law professors, “Your lower courts are a mess. If you live here, you ought to get it changed!”