The Obama Presidency and Human Rights 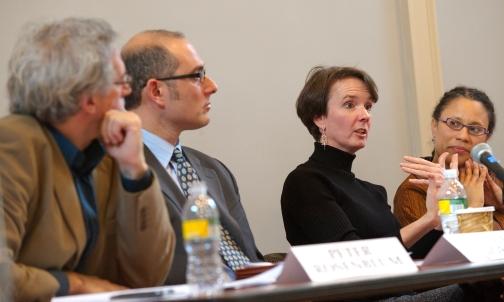 November 24, 2008 (NEW YORK) – A panel of human rights activists and legal academics convened at Columbia Law School to discuss what an Obama presidency will mean for the cause of human rights.
Two topics dominated the discussion: reconciling human rights with the threat of international terrorism, and the prospects of United States ratification of two human rights treaties that have been waiting for decades.

One participant, Sarah Cleveland, the Louis Henkin Professor Human and Constitutional Rights, said that three primary issues will confront the new administration in the national security area:  “what to do with Guantánamo and, more broadly, with future detention policy, abolishing torture in U.S. interrogation practices, and establishing accountability for human rights violations of the prior administration.”

According to Cleveland, the policy with respect to those currently detained on Guantanamo should be ordinary criminal prosecution or release. She added, though, that international humanitarian law recognizes a power to detain combatants under certain circumstances, and “the question of whether there should be some ongoing detention is a bitterly fought one among people who are otherwise our allies.”

While President-elect Obama has said that he intends to close the detention center at Guantánamo, panel members suggested that human rights activists may need to hold Obama’s feet to the fire.
Cleveland told a cautionary tale about the outcome of an earlier campaign promise to close a detention center at Guantánamo. Bill Clinton, while campaigning in 1992, had criticized President George H.W. Bush for holding Haitian refugees who tested HIV-positive at the naval base in Cuba, Cleveland said. Yet, within a year the Clinton administration was defending the policy of detaining the Haitians in U.S. District Court.
“There are entrenched interests in government that can effect significant push back against the types of human rights reform we are looking for,” said Cleveland, who joined the faculty at Columbia Law School in 2007 from the University of Texas School of Law. At Columbia, she is a faculty co-director of the Law School’s Human Rights Institute.
The panel – titled “The Future of Human Rights in the US: Strategies and Opportunities in a New Administration – also featured Sandra Babcock, an associate clinical professor at Northwestern University School of law; Ajamu Barak, the executive director of the U.S. Human Rights Network; Deborah LaBelle, a lawyer in private practice in Ann Arbor, Michigan; Alice Miller, a visiting professor at Boalt Hall; Catherine Powell, an associate professor Fordham University School of Law; and Jonathan Todres, an associate professor at Georgia State University’s College of Law.
Peter Rosenblum, the Lieff, Cabraser, Heimann & Bernstein Clinical Professor in Human Rights Law at Columbia Law School, moderated the discussion.
Panel members expressed hope that an Obama presidency would provide the opening needed to achieve U.S. Senate ratification of two human rights treaties: the United Nations Convention on the Rights of the Child (CRC) and the United Nations Convention on the Elimination of All Forms of Discrimination Against Women (CEDAW).
The CRC has been available for ratification for nearly two decades. In that time, only the U.S. and Somalia, among all eligible countries, have not ratified it.
Similarly, CEDAW, which was adopted by the United Nations in 1979, has been ratified by all but eight countries, including the United States.
“The new president was elected as an expression of the desire on the part of the American people for the U.S. to portray a different face internationally,” Cleveland said. Still, she cautioned, “we shouldn’t assume that because Barack Obama has been elected that we’re going to be able to get ratification.”
She noted that politicians in Washington would be skeptical of joining further treaties after the experience of the World Court ordering the U.S. to stop the pending execution of death row criminals who were not American citizens and had been denied access to meeting with their consular officials before their convictions. Earlier this year, the Supreme Court rejected the appeal of one of the criminals, José Medellín, a Mexican who was convicted in Texas in the murder of a 14-year-old girl, on the grounds that Texas did not need to comply with the World Court order.
“In the post-Medellín era, there are going to be many people who are very suspicious of subjecting what the U.S. does to international scrutiny,” Cleveland said.
But several panelists expressed hope that Obama’s victory could herald in a new era of U.S. participation in human rights treaties.
“We know that human rights is the idea of our time, to quote the great Louis Henkin, the Columbia Law professor,” Powell, of Fordham Law School, said.
Powell said that she would “like to see within the first 100 days a president embracing human rights in a high profile speech, the state of the union, or inaugural.”
Todres, of Georgia State, encouraged human rights activists to look beyond the East Coast as they campaign for ratification of human rights treaties.
“The conferences tend to be in Washington, D.C., or New York City,” he said, adding that many interested citizens lived elsewhere and couldn’t afford travel expenses. “That exposes us to accusations of elitism. I think we have to be sensitive to that.”
— Joseph Goldstein
Columbia Law School, founded in 1858, stands at the forefront of legal education and of the law in a global society. Columbia Law School joins traditional strengths in international and comparative law, constitutional law, administrative law, business law and human rights law with pioneering work in the areas of intellectual property, digital technology, sexuality and gender, and criminal law.