November 2007
Press contact:
James O’Neill: 212-854-1584   Cell: 646-596-2935
[email protected]
Crime-busting Los Angeles City Attorney Rocky Delgadillo '86 reduced gang violence in the nation’s second largest city through injunctions on gang members that prohibit them from gathering in public. He also stationed 42 prosecutors in neighborhoods -- some inside problem schools -- so that they may work closely with communities to reduce crime. These aggressive crime-fighting methods are working, he told law students attending his lunchtime address on Nov. 2 sponsored by the California Students Society. 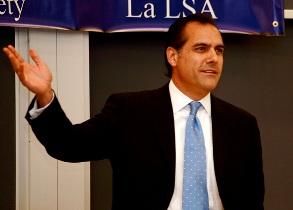 Rocky Delgadillo addresses the Law School on November 2, 2007.
Urging students to consider careers in public service so that they may “save lives and make a difference,” Delgadillo, the highest-level Latino in public office in Los Angeles, said he had been an entertainment lawyer before taking a leave from his law firm to work for Rebuild L.A. “I watched Los Angeles burn [from riots] in 1992,” he said, “and I wanted to help out.”
Later, as a deputy mayor for economic investment, he became keenly aware of inner-city problems when he toured troubled neighborhoods with potential investors. In 2001, he became City Attorney so he could “get rid of the problems that were hurting investment.” Cracking down on gang violence has been a priority.
“There are 800,000 known gang members in the U.S.,” he said, “and only 700,000 state and local police officers. By eighth grade, kids have made up their mind whether they’ll join a gang. Thirteen-year-olds are deciding whether to kill someone.” He described incidents in which kids have shot babies as part of their gang initiation.
Success in breaking up gangs comes not as much from increased arrests but from preventing kids from ever deciding to join gang activity, he said. “We partnered with the community to form bonds,” he said about his department of 550 lawyers. “We made the schools safer so parents would be willing to send their kids, and we dealt with 15,000 truants.”
Delgadillo described efforts his department was making to turn around Markham, a crime-ridden Watts middle school.  “We gave every child a school uniform so no one could be targeted because of what they wore to school,” he said. “We also shut down gang hangouts near the school.” Such tactics have cut crime in Watts, one of the city’s toughest neighborhoods, in half, he said, adding that he’s reduced the number of Los Angeles gang members from 40,000 to 28,000 in the past six years.
As of January 2008, he’ll be able to sue gangs for neighborhood damage. “I just got legislation passed that will allow this,” he said.
Delgadillo is also working with civil liberties groups to prevent hospitals from dumping homeless people they discharge back on skid row.
Making a pitch for new hires, he told students the City Attorney’s office has a training program that would give them more court room experience sooner than they would get working in a law firm right after they graduate. “I want the people who work for me to push the envelope,” he said, adding that he hopes his attorneys will also use skills such as mediation to get community cooperation in reducing crime and solving other problems.