As a visiting Leader-in-Residence, Krane offered students insider strategies for managing a team and succeeding as in-house counsel at a multinational corporation. 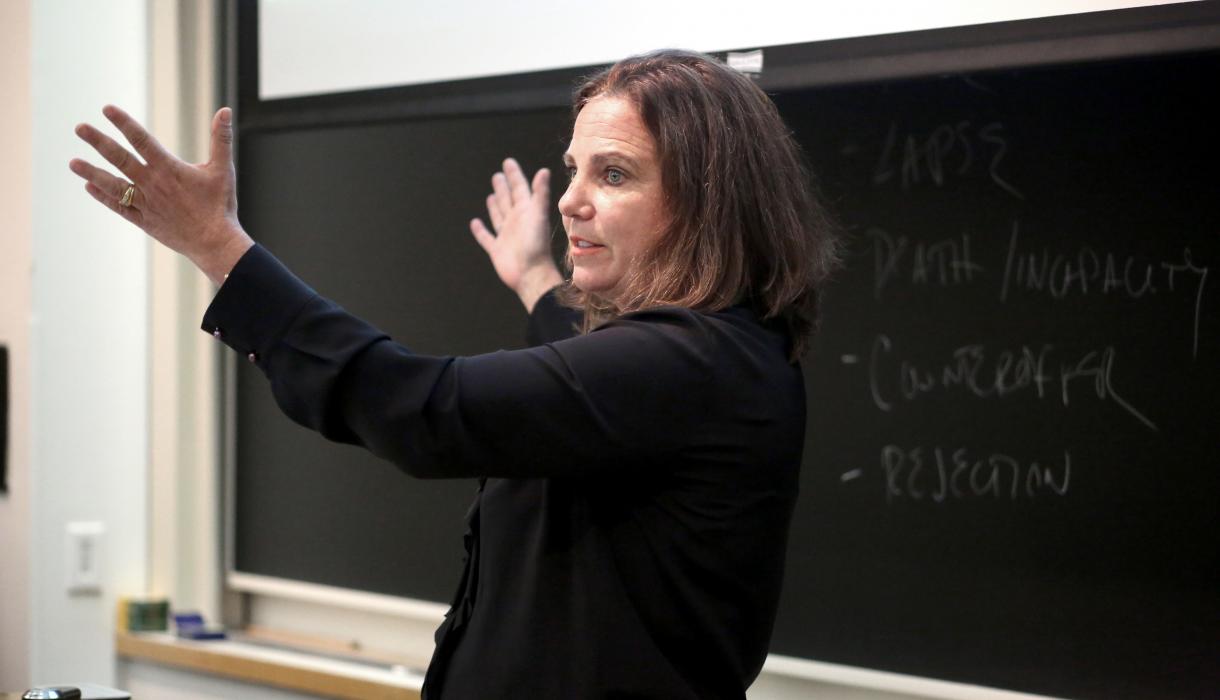 During her time as Leader-in-Residence at Columbia in October, Hilary Krane kept a dog-eared copy of The Trusted Advisor on the desk in her office in Jerome L. Greene Hall. The book, which was published in 2001, has influenced how she’s approached her role as in-house counsel for the past 20 years. It also served as the inspiration for her four-week course, Becoming a Trusted Advisor: The Role of the General Counsel in the Modern Multinational Corporation, which she taught under the auspices of the Reuben Mark Initiative for Organizational Character and Leadership, a joint project of Columbia Law and Business Schools.

Krane began her career as a litigator at Skadden, Arps, Slate, Meagher & Flom LLP in Chicago. She then moved to California where she was assistant general counsel (GC) at PricewaterhouseCoopers and general counsel and senior vice president for corporate affairs at Levi Strauss & Co. In 2010, she moved to Oregon to join  Nike Inc., where she is not only the GC but also executive vice president, and chief administrative officer.

The invitation to spend a month at Columbia came from Eric Talley, the Isidor and Seville Sulzbacher Professor of Law and co-director of the Millstein Center for Global Markets and Corporate Ownership. He enticed Krane by offering her “intellectual luxury," which was something she craved. “He nailed it,” she recalled. “It’s been really fun thinking about the curriculum and getting to know students. It’s been a wonderful change of perspective.” (Former Apple GC Bruce Sewell, the inaugural Leader-in-Residence in the spring of 2019, recommended Krane to Talley; in spring 2020, Facebook’s former GC, Colin Stretch, will serve as Leader-in-Residence.)

Through her course and a series of public discussions, law and business students got an insider’s perspective on the intangible skills and legal training that are essential for a career as in-house counsel.

For Krane, it’s imperative that Nike’s nearly 600-member global legal department has total trust in her—and vice versa. She and six senior members of her collegial legal team discussed the topic in detail during a public panel discussion, “Leading as a Team: Lessons from Nike Leaders and Executives,” which was held at the Law School on October 10.

“Trust is difficult to attain and easy to lose,” she said. “You can’t be trusted unless you trust, and I trust these people with my life, and they trust each other. And that’s what makes us successful.”

Krane also emphasized that a GC cannot succeed without earning the trust of her C-suite colleagues. “There is just so much risk in everything you do together—you have to be thoroughly aligned,” she said. “I don’t think anybody ever taught me in law school that fundamental interpersonal trust would be so important in delivering professionally. When I learned it, my career really started moving in exciting directions.”

Leaders, she said, cannot be egotists. “Your career is going to be about who you choose to surround yourself with,” she said. “Don’t be afraid to have people who are smarter than you are as part of your team. They don’t make you look worse; they make you look better.”

Building and maintaining a team requires that the team members can work in harmony with each other. That means hiring—and, yes, firing—the right people.“It’s called managing with courage,” she said. “It can be a lonely job. All the people I am close to I may have to fire one day."

One of the ways Columbia Law School prepares students for careers like Krane’s is through the In House Counsel Externship, part of the new In-House Counsel Lab. Current externship students are working at start-ups and major corporations, including CBS, Chobani, Glossier, and Mastercard, and taking courses such as Professional Responsibility: Representing of Business Organizations; Advising Complex Corporations: An Inside Perspective; and Organizational Misconduct.

During her residency, Krane led a private seminar for the externship students and offered them micro and macro views of an in-house career.

“Most big companies have significant in-house operations, a real transformation from the period when I began practicing,” she said, noting that in-house legal departments can provide companies with more nuanced and mission-driven advice while also being more economical and efficient than outside law firms. “There is a lot of research that shows that long-tenured senior lawyers within a company correlate very strongly with firm growth and health. Lawyers who understand the operation can tell what the risk tolerance of the firm is and can, therefore, adjust into it and be more flexible—and that makes a big difference. Certainly, that’s our experience at Nike.”

Krane also told students that it’s an “absolute requirement” to work at a firm for three or four years before applying for an in-house job in order to get “the training you need to be excellent at your craft.” And no matter how large the salary, she advised them to try to live as debt-free as possible and have a financial cushion. “You need to be okay walking away when you have to make decisions that are painful and people don’t want to hear,” she said. “You want to be confident that there is no set of circumstances that could ever force you to compromise on your judgment.”

While at Columbia, Krane continued to work fulltime for Nike, where she was busy preparing for the announcement that Nike CEO and president Mark Parker would be retiring and replaced by board member John Donahoe.

“There’s a huge amount of work for a GC with succession,” she said, noting that her responsibilities included negotiating a new employment agreement, preparing SEC disclosures, and overseeing internal and external communications. “I am the lawyer to the board, so I have to make sure our governance practices regarding something like succession are appropriate.”

Krane has also been following the fictional version of corporate leadership transitions on the HBO series Succession. On the show, the GC for a global media company (which resembles Rupert Murdoch’s empire) makes herself available 24 hours a day to the board and C-suite executives. “I love it,” she said. “The GC, even though she’s a totally terrible character, is vital and right in the middle of it. That’s what being a GC is all about.”