The first woman to serve as attorney general of New York spoke about her career and why diverse perspectives matter in the law.

Speaking at this year’s Myra Bradwell banquet, New York Solicitor General Barbara Underwood recalled a 40-year-old New Yorker cartoon that featured two little girls reflecting on life: “I’m afraid by the time I grow up,” said one, “it’ll be too late to be the first woman anything.”

It wasn’t so for Underwood, who became the first female acting U.S. solicitor general when she was appointed in 2001. In accepting the Myra Bradwell Award before a lively gathering of faculty, students, alumni, and administrators, she humbly touched on other firsts she had achieved: She was the first woman to bring a nursing baby to a U.S. Supreme Court argument (she was co-counsel, and her son stayed in the clerk’s office with a nanny during the argument) and the first female attorney general of New York State. (She was appointed to serve after Eric Schneiderman’s resignation, in May 2018, and returned to her role as solicitor general after Letitia James took office.)

The event, hosted by the Columbia Law Women’s Association (CLWA) on March 13, is held annually in honor of  Myra Bradwell, a pioneer in the law who passed the Illinois bar exam in 1869. But she was not admitted to the bar because, as a married woman, she could not legally enter into contracts without her husband’s consent. She took her case to the U.S. Supreme Court, which upheld the Illinois Supreme Court’s earlier decision. “The natural and proper timidity and delicacy which belongs to the female sex evidently unfits it for many of the occupations of civil life,” wrote Justice Joseph P. Bradley in the court’s opinion. After the Illinois Supreme Court reversed its ruling, in 1892 Bradwell finally became the first woman admitted to the Illinois bar.

Underwood was a natural choice for the award, according to Alyssa Weinstein ’20, who co-chaired the event with Laura Lee ’20. “Just as Myra Bradwell attempted to be the first woman to be admitted to the Illinois bar, paving an easier path for future female attorneys, Solicitor General Underwood similarly broke barriers,” says Weinstein. “As she noted in her speech, there is still much progress to be made, but her career has made ambitions for female law students and lawyers a more attainable reality.” Julissa Reynoso ’01, a partner at Winston & Strawn and former U.S. ambassador to Uruguay, introduced Underwood, saying she was proud to have worked alongside her on James’s transition team. Reynoso smiled as she noted that Underwood “may have gone to another law school, but she’s here now.”

Underwood spoke with humor and honesty to promote her underlying message of diversity and inclusion, recalling that when she began teaching at Yale Law School in 1972, she couldn’t find a ladies’ room. So she hung a sign on a bathroom door: “This is to advise you that starting on such and such a date, I intend to use this restroom.”

Reflecting on her experience clerking for Justice Marshall, Underwood noted that his opinions on racial discrimination could be equally applied to sex discrimination. Justice Marshall understood, Underwood added, the value that distinct life perspectives—those of an African-American or of a woman, for instance—can bring to the judicial decision-making process.

As an example of how different experiences could shape the opinions of men and women, Underwood cited a case in which a retired female police officer was convicted of murdering a man she had met in a bar. When the decision was taken up by a federal court, the judges split along gender lines: The men saw the female defendant as defenseless and ignorant, and the women viewed her as capable of making strategic choices. (The conviction was set aside, for ineffective assistance of counsel.)

CLWA also awarded Kathleen Ritter ’20 the 2019 Myra Bradwell Note Competition by the Columbia Journal of Gender and Law for her article “We Are Not Struck With Blindness: The Establishment Clause and Religiously Motivated State Preemption of Municipal Non-Discrimination Law.” Nicole Masiello ’19, Jessica Metzger ’19, and Taylor Wood ’19 also were recognized for their service as board members.

In concluding her remarks, Underwood made a heartfelt plea to the women assembled: The “most important challenge of our time,” she said, is that in government, in boardrooms, in academia, we listen to the voices of all those who are present, that we “build bridges” to unite not just our state but “our larger and more diverse and wonderful nation.”​ 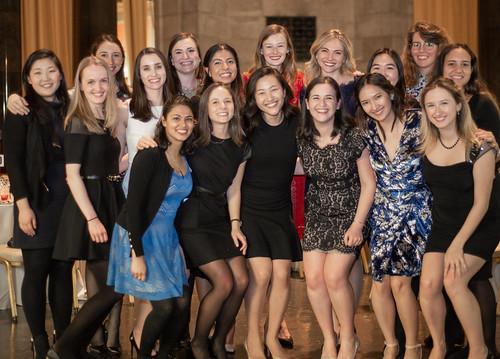