New York, Nov. 30, 2010—More than 100 former clerks of 2nd Circuit Court Judge Wilfred “Bill” Feinberg ’43 recently established a student scholarship to honor the venerable jurist, who has served on the federal bench for half a century. Many of them gathered in Columbia Law School’s Drapkin Lounge on Nov.11, to celebrate a new scholarship that will support students based on academic achievement and financial need.

“I’m so impressed with what was done here,” said Feinberg, who has selected at least one Columbia Law School graduate to serve as a clerk in his chambers every year except one since he was appointed to the federal bench in 1961. “And I’m very grateful to everyone who’s connected to the scholarship.”

Stanley Lubman ’58, the first Law School graduate to clerk for Feinberg, spearheaded the fundraising efforts. At the event, Lubman announced that, between May and August, donations to the scholarship totaled more than $200,000. “I am delighted to have helped energize Bill Feinberg’s clerks to establish a scholarship that might enable a Columbia [Law School] student to pursue an innovative and rewarding career,” said Lubman, a distinguished resident lecturer at the University of California, Berkeley School of Law. 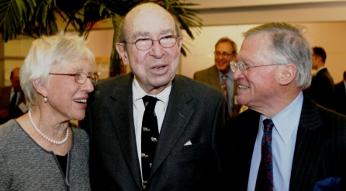 Stanley Lubman, (far right) one of the first Law School graduates to clerk for Feinberg (center), spearheaded the fundraising efforts, along with his wife Judith (left).

Addressing some 70 alumni and guests, Lubman lauded the judge for the depth and focus of his intellect, for his great discipline, and for the care he takes in rendering decisions. David M. Schizer, Dean and the Lucy G. Moses Professor of Law, described Feinberg as not only a remarkable judge, but a remarkable man as well.

Professor Gerard E. Lynch ’75, one of Feinberg’s former clerks and now a fellow member of the 2nd Circuit Court, followed suit, crediting the judge with helping the 2nd Circuit become one of the most collegial, cordial, and efficient courts in the country. “I’m sure Judge Feinberg wouldn’t take credit for that,” Lynch noted, “but he deserves credit.”

Throughout the evening, other clerks reminisced about their experiences working with Feinberg, who was chief judge of the circuit court from 1980 to 1988 before assuming senior status in 1991. “[Feinberg has] an aura around him of integrity,” said Alan Vickery ’83, a former clerk who now serves as a partner in the New York office of Boies, Schiller & Flexner. “His level of ethics was the highest imaginable.”

Vickery, who worked for Feinberg from 1983 to 1984, recalled the thrill of discovering he had been selected for the position. “It was the best clerkship available when I came out of Columbia Law School,” Vickery said. “It was like being picked by the Yankees.”

That year proved to be a formative experience for Vickery, who vividly recalls Feinberg’s commitment to efficiency and high ethical standards. So when Lubman approached him about contributing to the scholarship, Vickery agreed immediately. “I thought, ‘What better tribute than something that would live on at the school he loves?’”

Feinberg, for his part, spent much of the evening deflecting such praise and expressing his gratitude toward all those who made the scholarship possible. “I feel blessed at this point of my life to stand here and to see so many of you again,” said Feinberg, who turned 90 in June. “Thank you so much for doing what you’ve done to make this occasion one I will always remember.”