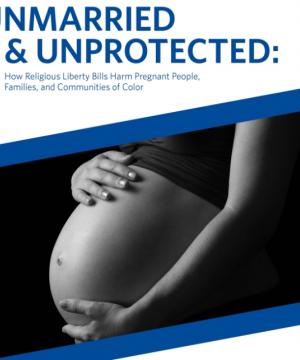 Many recently proposed religious exemptions bills, most notably FADA, which President Trump has highlighted as a top legislative priority, would confer special protections for the religiously motivated belief that sexual relations should only take place between married different-sex persons. By allowing religious objectors to defy all laws that conflict with their religious beliefs about sex and marriage, FADA and similar bills would significantly undermine the reach of federal and state anti-discrimination laws, including the Pregnancy Discrimination Act, Fair Housing Act, and Equal Credit Opportunity Act. Such exemptions would permit (if not encourage) religious objectors to engage in a wide range of discriminatory acts against unmarried pregnant and parenting persons, including denial of employment, housing, public benefits, and access to social services. An earlier report by PRPCP offers an overview of state and federal religious exemption bills.

Although these bills have the potential to harm anyone who has had sex when unmarried, people of color, especially African-Americans, would particularly suffer their effects. This is because among all racial groups, African-Americans are the most likely to have and raise children outside of marriage. According to data from the National Center for Health Statistics, 70 percent of African-American children are born to parents who are not married, followed by 67 percent of Native American children, and 53 percent of Hispanic children, compared with 35 percent for children born to white women. In addition, because most women of color earn less than white women and are less likely to have financial cushions, religious exemptions laws that sanction employment, housing, and benefits discrimination stand to present women of color with far greater financial burdens.

“This report shows that policymakers across the nation are leveraging religion to push forward crude and discriminatory laws that impose extreme financial, dignitary, and emotional harm on women of color and their families,” said Kira Shepherd, associate director of PRPCP’s Racial Justice Program. “These laws could turn back the clock on some of the progress this country has made towards racial justice. They have the potential to take us back to a dark era where certain religious views were used as a justification for legal discrimination.”

PRPCP Director Elizabeth Reiner Platt said, “Women of color already face disproportionately high rates of pregnancy discrimination. In the name of protecting religious beliefs, FADA and similar state-level exemptions would impose yet another burden on many low-income families and families of color.”