The New Pedagogy of Financial Regulation

A gathering of preeminent regulators, economists, finance lawyers, and legal scholars addressed the need for interconnected legal and business teaching innovations in the wake of the 2007-09 global financial crisis at a major conference on “The New Pedagogy of Financial Regulation,” held Friday, Oct. 21 at Columbia Law School.
Federal Reserve Board Governor Daniel Tarullo and Director of the U.S. Treasury Office of Financial Research Richard Berner delivered keynote addresses during the event, hosted by Columbia University’s Richard Paul Richman Center for Business, Law, and Public Policy, an interdisciplinary academic center established in 2011.
A Holistic View 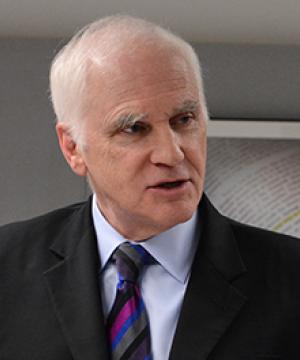 Tarullo (left) advocated looking at the financial system as a whole, in light of the “macroeconomic turbulence, technological and business innovation, and competition” that led to the breakdown of “the traditional separation of lending and capital market activities.”
In his address, Tarullo identified several areas for research, including corporate governance of financial institutions, the appropriate degree of accountability and oversight for the financial regulatory agencies, and the organization of the international financial regulatory system. He emphasized the value of examining the liability side of the bank balance sheet, especially “runnable liabilities” such as uninsured deposits, repo, and commercial paper. “The financial crisis was, at least in its more virulent periods, as much a funding crisis as it was a solvency crisis” and many of the on-going regulatory issues relate to the risks of short-term funding, he explained.
“The greatest risks to financial stability lie in activities with vulnerability to funding runs and asset fire sales,” Tarullo said. “These may be associated either with some of the same kinds of short-term funding found in systemically important banking organizations or in the potential for rapid and substantial investor redemptions of their holdings in certain investment funds. Where substantial leverage--either nominal or synthetic--is also present, the risks are only greater.”
The speech received media coverage from the Wall Street Journal, Reuters, Market Watch, and other outlets.
Information Access 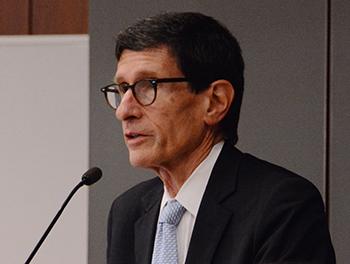 In his keynote address, Berner (right) argued that the information gathering activities of the Office of Financial Research (OFR) were critical to addressing core issues of systemic risk, but that such efforts might be constrained by the silos of the US financial regulatory system. Some of OFR’s information gathering requires cooperation from the operational agencies (such as the SEC), yet because “financial stability” was not explicitly part of their mandate, they might be reluctant to impose new requirements on private firms in light of the costs. Berner outlined various ways in which OFR is developing programs to generate information about critical market activity and working to improve the “quality, scope, and accessibility of financial data.”
The regulators had insufficient information to understand the unfolding of the financial crisis from 2007 to 2009, and a deeper understanding of markets would “enhance the resilience of the financial system,” Berner said. He embraced an “interdisciplinary approach to problem solving [in which] lawyers must understand basic economics and see the regulatory forest and not just the trees. The same is expected of economists regarding the law.”
A Day at Columbia Law School
The daylong event served as the launch of Principles of Financial Regulation, a new book co-authored by Columbia Law School Professor Jeffrey Gordon and John Armour, Hogan Lovells Professor of Law and Finance, University of Oxford. Designed for use in law schools and business schools as well as legal departments in the public and private financial services sector, the book seeks to offer a “unified field theory” approach to financial regulation that is responsive to the sources of 2007-2009 financial crisis. Gordon, co-director of both Columbia Law School’s Millstein Center for Global Markets and Corporate Ownership and the Richman Center for Business, Law, and Public Policy, was lead organizer of the Oct. 21 event.
Columbia Law School Professors Robert Jackson Jr. and Kathryn Judge moderated Tarullo’s and Berner’s speeches, respectively. Professor Gillian Metzger addressed the role that classic administrative law should (and should not) play in financial regulation, drawing from her recent article, Through the Looking Glass to a Shared Reflection: The Evolving Relationships between Administrative Law and Financial Regulation.
A complete list of conference panel topics and panelists is available here.
# # #