Reilly Steel ’17 to serve in federal government with support from Jim Millstein ’82 and Ira M. Millstein ’49. 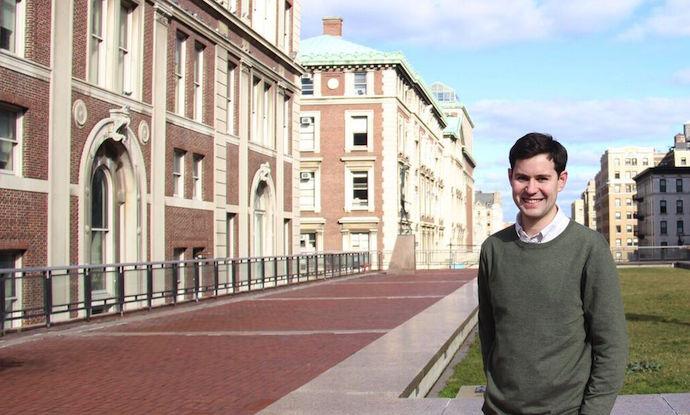 Probably no one at Columbia Law School was surprised when Reilly Steel ’17 was chosen for the inaugural Millstein Public Service Fellowship.  The new fellowship helps jumpstart the career of a recent Law School graduate working on financial regulation issues in Congress or the executive branch. By any measure, Steel’s accomplishments in this field have been impressive.

Steel, 27, traces his interest in financial regulation to his experience working on Barack Obama’s 2008 presidential campaign as a Middlebury College student. “Believing that [the student campaigners’] contributions helped to elect a leader who would bring about lasting change—new laws that would protect the people, the economy, and the environment for many years—I was excited for the future,” said Steel, who was Vermont state director for Students for Barack Obama.

As a Law School student, Steel has dedicated himself to financial regulations work. He published a note on underground rulemaking at the Securities and Exchange Commission in the Columbia Law Review in fall 2016, and, during this past summer, worked as an associate in Cravath, Swaine & Moore’s banking and credit group.

The year before, Steel deepened his understanding of relevant issues when he served as a teaching fellow in Professor Eric Talley’s Corporations class.

“Mr. Steel is without a doubt one of the strongest students I have ever had the pleasure of interacting with,” said Talley, an Isidor and Seville Sulzbacher Professor of Law, and a leading expert on the intersection of corporate law, governance, and finance. “He loves thinking about how policy actors can best regulate information disclosures between investors and management, with maximal informativeness and minimal regulatory burden. Many of us can fake this type of love, but Reilly’s is genuine, refreshing, and I daresay, infectious.”

Steel’s professors agree he is an ideal recipient of the Millstein Fellowship. In Professor Robert J. Jackson Jr.’s Investment Banking class, Steel “created a highly sophisticated leveraged buyout model that would have made even a senior banker blush,” said Jackson, director of the Law School’s Program on Corporate Law and Policy. More importantly, Steel “showed a rare sensitivity to business realities…Government needs someone like him—especially now.”

Steel was named a 2015–2016 James Kent Scholar for outstanding academic achievement at Columbia. In 2015, he interned with Judge Stephen V. Wilson of the U.S. District Court for the Central District of California. He also served as an articles editor of the Columbia Law Review and president of the Law School’s American Civil Liberties Union chapter. The details of his postgraduate employment plans are being finalized now.

“It is more important now than ever before that the government be populated by reasonable, committed lawyers who can act as a moderating influence,” Steel said. “I want to be one of those lawyers.”

The Millstein Public Service Fellowship honors Jim Millstein ’82, the Treasury Department’s chief restructuring officer during the 2008 financial crisis, and his father, Ira Millstein ’49, founder of the Systemic Risk Council, a private sector initiative to ensure that legislators and regulators remain vigilant in addressing the underlying causes of the crisis.

“I have no doubt that Reilly Steel will make Columbia Law School—and the Millsteins—proud when he brings his great mind and work ethic to Capitol Hill,” said Gillian Lester, Dean and the Lucy G. Moses Professor of Law. “We are grateful to Jim and Ira for establishing this important, creative new fellowship as a way to support top students who want to serve in the government.”

The Millsteins were inspired to help Columbia create the fellowship as a way to introduce recent graduates to government service early in their careers, and thereby ensure that the Law School remains at the forefront of discussions of the regulation of the financial services industry for decades to come.