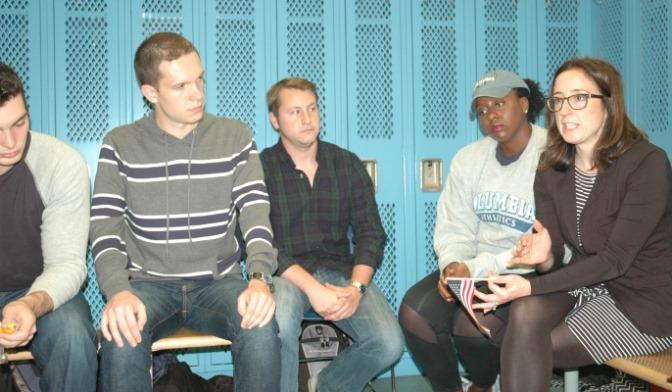 The Law School's Mediation Clinic works with hundreds of parties every year, in settings ranging from the Harlem Small Claims Court to federal employment discrimination claims. Carter woke up Tuesday inspired to discuss and dissect with her students what “locker room talk” really means in public discourse, and to use Republican presidential nominee Donald J. Trump’s now infamous comments about women to open a conversation with Columbia Law students about the role conflict resolution can play in society.

“As a professor, a human being, an American, a lawyer, a woman, and a conflict resolver, I want our society to do better in the way we talk to and about each other,” said Carter, director of the Law School’s clinical programs. “I would love for our students—and our mediation program—to contribute toward ‘the new locker room talk’—talk that, regardless of political party affiliation, seeks to build people up, treat all people equally, and promote conflict resolution instead of violence.”

Packed into a cramped locker room equipped with only three benches and several chairs, approximately 15 students took turns sharing their opinions about Trump’s comments, the contentious presidential election in general, and conflict resolution in their own lives, as well as what it feels like to be the subject of disparaging remarks.

“There’s a difference between what we can say and what we should say,” offered one student, referencing the tenor of the election, as well as the law school environment. “We need to learn how to talk to one another [respectfully]. If we can’t, we’ll never be able to learn how to talk about the law.”

“I was in a locker room just yesterday,” shared another, who felt Trump’s comments painted a picture of how all men speak behind closed doors. “We talked about job applications. As a guy, I don’t want people to think a private setting means I become a person who demeans women.”

Convening class in the locker room was not only symbolic, but the venue afforded Carter and her co-teacher Shawn Watts ’12 the chance to form a peacemaking circle, a mediation technique used to create an intimate, nonjudgmental space where participants can discuss their feelings on a specific conflict or problem—no matter how divergent or controversial those opinions may be.

“We have to be open and willing to hear what the other person has to say, or else you can’t have honest discourse,” said Watts, who serves as associate director of the mediation program and pioneered Columbia’s Native Peacemaking course, the first of its kind at any law school.

Mediation Clinic students develop problem-solving and conflict-resolution skills, and represent diverse clients in and around New York City.  In preparation for their work as future mediators, students handle real cases, serving as mediators in local federal and state courts, for the Equal Employment Opportunity Commission and for nonprofit organizations. They also participate in an extensive program of simulations designed to build their skills and their capacity to critique and learn from their own work.  During the course, students address current policy and ethical issues.

“As mediators and lawyers,” said Carter, who has trained U.N. diplomats and corporate executives in the art of mediation and negotiation, “much of our work is done in the equivalent of a locker room”—a private space in a sphere of privilege. “Our mission is to do so with transparency, in a way that brings us closer to the truth as well as to each other.”