Current and former U.S. Securities and Exchange Commission (SEC) officials and leading scholars and practitioners will gather Thursday, March 29 for a roundtable discussion centered around a new book identifying the most important areas of inquiry regarding securities regulation and financial markets. 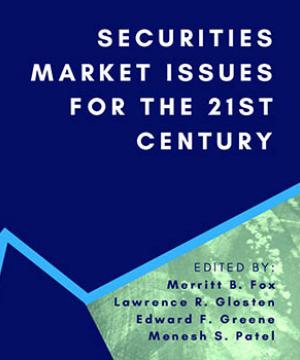 The e-book, Securities Market Issues for the 21st Century, is the culmination of the first phase in a multi-year New Special Study of the securities markets being conducted by the Program in the Law and Economics of Capital Markets, a joint initiative of Columbia Law School and Columbia Business School. The study—the first such examination in more than five decades—will ultimately result in a comprehensive report for regulators and members of Congress that can be used to guide future financial regulation.

“The New Special Study represents a great opportunity to help shape securities regulation for the 21st century so that the markets best serve society's needs in a world that is very different than that of the last comprehensive survey,” said Columbia Law School Professor Merritt B. Fox, who directs the Program in the Law and Economics of Capital markets along with Columbia Business School Professor Lawrence R. Glosten, and Columbia Law School Adjunct Senior Research Scholar Edward Greene.

As part of Stage I of the New Special Study of the Securities Markets, in March 2017 the Program in the Law and Economics of Capital Markets convened leading lawyers, economists, academics, and regulators for a two-day conference on the future of financial regulation. At the conference, seven papers commissioned by the New Special Study were presented and discussed. Financial Industry Regulatory Authority (FINRA) President and Chief Executive Officer Robert W. Cook and then-acting chair of the SEC Michael S. Piwowar, an SEC commissioner since 2013, delivered keynote addresses. The new book compiles those papers and includes additional commentary.