Noah Perlman ’97, managing director and global head of financial crimes at Morgan Stanley, talks to students about the intersection of finance, deals, and geopolitical issues. 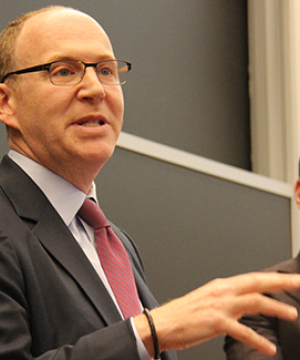 When Noah Perlman ’97 served as division counsel for the United States Drug Enforcement Administration’s New York division, only once did he activate the lights and sirens that were mounted atop his car for strictly personal use: when his wife went into labor with their second child. “I figured if not now, when?” he said to laughter before an audience on March 9 when he returned to Columbia Law School as a guest of the Roger Hertog Program on Law and National Security and Columbia University’s Global Policy Initiative​.

Perlman has spent the past decade at Morgan Stanley, and is now managing director and global head of financial crimes. In that role, he has legal and compliance responsibility for governance, oversight, and execution enterprise-wide of the firm’s anti-money laundering, sanctions, anti-boycott, anti-corruption, and government and political activities programs.

In a discussion moderated by Columbia Law School Professor Matthew C. Waxman, Perlman discussed national security issues facing the financial industry, including cyber security and sanctions compliance. He described his work at the U.S. Department of Justice and Drug Enforcement Administration as the point where his career took a different turn from the standard law firm and clerking path he followed after graduation, ultimately leading to his current role.

“It’s obvious from the crowd that there are a lot of students here who are interested in the intersection of financial services and national security,” said Waxman, the Liviu Librescu Professor of Law and faculty chair of the Hertog Program, who the week before testified before the Senate Armed Services Committee about the international law dimensions of cyber strategy and policy. “What’s your advice for them?” he asked Perlman.

“The space is fascinating—it’s an incredible intersection of finance, deals, and geopolitical issues,” said Perlman, who was also an adjunct professor at Columbia’s School of International and Public Affairs. “The regulatory pendulum might swing back in this new administration. But I’ve served under four different U.S. Attorneys and every day I had a job to do. Regulators, no matter who is at the top, have a lot of work to do.”