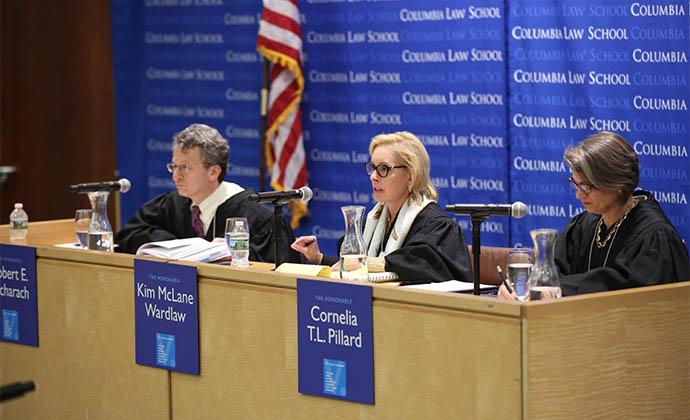 After more than an hour of oral arguments, the judges awarded Emily Hush ’18 the Lawrence S. Greenbaum Prize for best oral presentation. “Your command of the record and of the law was extraordinary,” Wardlaw told Hush, with Pillard adding that Hush was “rock solid, like a steel trap.”  It was not her first win at a moot court competition. As a 1L, Hush had won the first-place prize at the European Law Moot Court in Luxembourg—the only winner from a U.S. law school and the first in the history of Columbia Law.

Hush and her partner, Jan Jorritsma ’18, represented the U.S. government in the student-created case, which pitted federal prosecutors against a state secretary of state accused of misleading voters from an opposing political party about penalties for voter fraud in an alleged effort to have them deregister.

“It was surreal and exciting to finally argue in front of federal judges,” said Hush.

Lauren Beck ’19 and Brett Mead ’18 represented the secretary of state, who had appealed his conviction on charges that he had violated 18 U.S.C §§ 666 by misapplying funds awarded under the fictional law, “Stop Threats to Our Polls and Recreate Understanding, Security, Safety, and Integrity in America,” or “STOP RUSSIA” Act; and that he had conspired to deprive citizens of their right to vote and actually deprived citizens of their right to vote in violation of 18 U.S.C §§ 241 and 242.

The Harlan Fiske Stone Moot Court Competition, an annual competition named in honor of 1898 graduate Harlan Fiske Stone,   consists of three elimination rounds. This year, 56 students entered, with 20 students advancing to the semifinals earlier this spring. Hush, Jorritsma, Beck, and Mead advanced to the final round after receiving the highest scores in the semi-finals.

In the finals, Mead argued first, emphasizing that his client, the secretary of state, had received no “pecuniary benefit” from the scheme and that if he had “a dual interest”—removing people from the polls who actually had lost their right to vote in addition to removing legitimate voters from the opposing party—he could not be convicted under the relevant statute.

“This is not a case of a minor deviation,” Hush countered, adding “this is about deviations from a federal statute—intentional deviations, intentional violations of a federal statute. A federal governing statute told appellant what he needed to do…All you have to do is comply with the law. That’s the least that we expect from our state officials.”

Beck, tasked with defending the secretary of state on the conspiracy against the right to vote and deprivation of the right to vote charges, had the hardest argument, as both Pillard and Wardlaw acknowledged from the bench. Under prodding from Pillard, Beck conceded that her client’s conduct may have violated the law, but she argued it was a violation of state law, not a violation of federal law.

In the end, the judges awarded Hush with the prize for best oral presentation. A four-person student executive committee awarded Jorritsma honors for best final-round brief. The judges praised all four competitors.  “It’s such a pleasure to come to a moot court where the students are always so much better than 99 percent of the lawyers I see every day,” Wardlaw said.

Bacharach led the room in a round of applause for the students who created the case: Harlan Fiske Stone Moot Court co-directors Gideon Hanft ’18 and Paul “Sam” Callaghan ’18.
“It was fabulous,” Bacharach said. “I thought it was really a very well-constructed issue.” 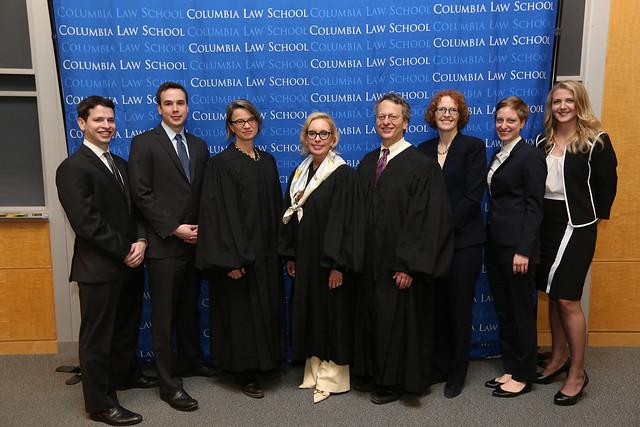 In writing the record, co-creators Callaghan and Hanft drew on lessons learned in Professor Daniel C. Richman’s Federal Criminal Law class, Hanft’s experience as an intern with the Public Corruption Unit of the U.S. Attorney’s Office for the Southern District of New York, and the general political climate in the months after President Trump’s inauguration.

“The election was so much on everyone’s minds last year,” Hanft said. “We wanted to make it a problem that speaks to the issues going on in the world.”

Although some law schools purchase moot court cases or recycle existing ones, Columbia Law School’s moot court program is based on original, student-written legal controversies. Watching the case come to life in oral arguments is “very exciting,” Callaghan said. “I’m just grateful to be at a school that puts such a premium on this sort of program.”