Mining for Solutions: Conference Looks at Sustainable Development in the Extractive Industries

Media Contact:
Public Affairs Office, 212-854-2650 [email protected]
New York, Nov. 4, 2010—If you heat a home, drive a car, use a cell phone, or wear a diamond ring, then you are a consumer of a raw material derived from an extractive industry.

Because these industries touch so many lives and generate billions of dollars for both companies and the countries where they operate, more attention is being paid to how mineral, oil, and natural gas resources can be developed in a way that is both profitable and sustainable. That was the focus of a conference held Oct. 27-28 by the Vale Columbia Center on Sustainable International Investment at Columbia University’s Faculty House.

The Center is a leading forum on issues related to foreign direct investment in the global economy, with a special emphasis on the contribution of such investments to sustainable development. It is a joint effort of Columbia Law School and the Earth Institute. The conference is believed to be the first to bring together government leaders, industry executives, academics, and top representatives from major non-governmental organizations to discuss one of the most-pressing topics in the developing world.
As panelists acknowledged, there are no easy answers. But a consensus emerged that all parties involved must be part of any solution.
“I think, for us, the main challenge now is how we move forward from principles of sustainable development toward actual criteria for companies and governments,” said Karl Sauvant, the Center’s Executive Director (right). 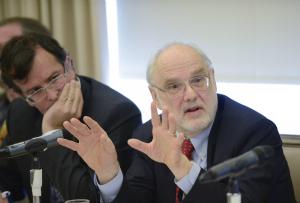 Part of that process involves the inclusion of indigenous groups in any decision-making. That may sound intuitive, but it has not always been the norm. Now, it is viewed as not only a sound business practice, but a “source of empowerment for the communities,” said Peter Rosenblum, the Lieff, Cabraser, Heimann & Bernstein Clinical Professor in Human Rights, who has worked extensively on mineral and resource issues in Africa.
Rosenblum said engaging with indigenous communities early in the planning for new projects can result in more-efficient operations and avoid broken promises down the road. “I think many people would say we need to know the limits of our competence and not commit to things we just can’t possibly do,” he added.
To be sure, many extractive industries operate in countries that are resource-rich but have high unemployment and poverty and lack many basic services. Increasingly, they are turning to NGOs and other agencies to help ensure they have a mutually beneficial relationship with companies that operate within their borders. Beyond royalty payments, that could take the form of spending on infrastructure and various public services.
“Most of those countries are very dependent on extractive industries,” Sauvant said. “How do we help countries in negotiating better contracts?” What can go into the planning process of extractive projects that increase their contribution to development?” 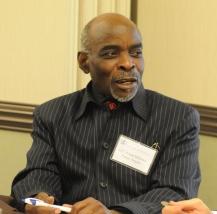 Indeed, the kind of help that Sauvant describes is exactly what is needed for many developing nations with rich mineral deposits, said Nahas Angula (left) , the Prime Minister of Namibia, who was on the conference’s final panel.
“Governments tend not to have that capacity because there is no expertise among the policymakers, especially the political players,” Angula said.
Namibia is a major producer of uranium and diamonds. It also oversees nine companies exploring for oil and gas on land and offshore. Angula, who has received Master’s Degrees from Columbia University and Teacher’s College, advocates the creation of an “integrated network of knowledge” that countries can contribute to and share from to “make sure that investors do exactly what the government wants.”
Toward that end, transparency over how governments and companies deal with each other was a prominent theme of the conference. In countries once rife with corruption among the ruling elites, meaningful change is starting to emerge, said Karin Lissakers, executive director of the Revenue Watch Institute, a watchdog group that promotes transparency in the extractive industries.
“There have been dramatic advances that have come in fits and starts, but it seems to me, there is a growing consensus around the principle that transparency is valuable in and of itself,” said Lissakers, a former Columbia University professor.
The conference’s keynote speaker, Sen. Benjamin Cardin, D-Md. (right), championed a provision in the Dodd-Frank financial reform law that requires companies registered with the U.S. Securities and Exchange Commission to publicly disclose how much they pay governments to access their oil, gas, and minerals. 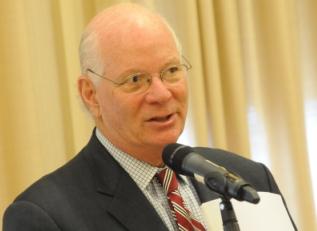 “Investors have a right to know in what countries and to what extent the companies they want to invest in are doing business,’” Cardin said. “They have that right knowing full well that the stability of the country in which the mineral companies operate could very well affect the value of their investment.”
Cardin said greater transparency can enable countries to break what is known as the “resource curse,” where countries that receive billions from extractive industries are also those with some of the world’s highest poverty rates, and prone to corruption and political instability.
“It doesn’t have to be that way,” Cardin said, noting that the new law could go a long way in altering the status quo.
“The United States is coming back to the table,” he added. “The fact that we acted has gotten the attention of the international community.”
Columbia Law School, founded in 1858, stands at the forefront of legal education and of the law in a global society. Columbia Law School joins its traditional strengths in international and comparative law, constitutional law, administrative law, business law and human rights law with pioneering work in the areas of intellectual property, digital technology, sexuality and gender, criminal, national security, and environmental law.
Visit us at http://law.columbia.edu
Follow us on Twitter http://www.twitter.com/columbialaw