Media Contact:
Public Affairs Office 212-854-2650 [email protected]
New York, April 13, 2010—Mina Nasseri ’10 will begin her legal career in the litigation department of a leading law firm.
That typically means years of brief writing, research and other support work before an associate is even given the chance to argue cases. But if Nasseri’s performance Monday in the final round of the Harlan Fiske Stone Moot Court Competition at Columbia Law School is any indication, she may not have long to wait.
Nasseri received the Lawrence S. Greenbaum Prize for best oralist in the competition. The award was established in 1951 and is named after a member of the class of 1912.
“It was an excellent experience. It was probably the most nervous I will be in my law school career, but also one of the most exhilarating experiences,” said Nasseri, who will start this fall at Latham & Watkins in San Francisco.
Also in the finals was Geoffrey Cajigas ’11, who argued with Nasseri (below left) for the appellant in the fictional case of Madison v. Marbury Public School District. Evie Spanos ’11, and Philip Gary ’10 (below right), argued for the school district. The four survived two rounds of eliminations from the competition, which started with 49 students (click here to view a photo gallery from the final; additional photos will be posted in the coming days). 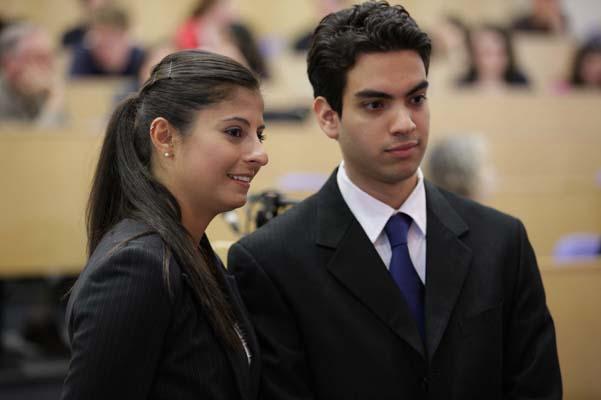 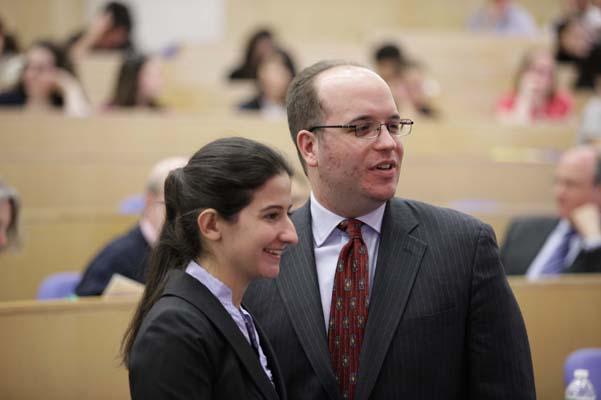 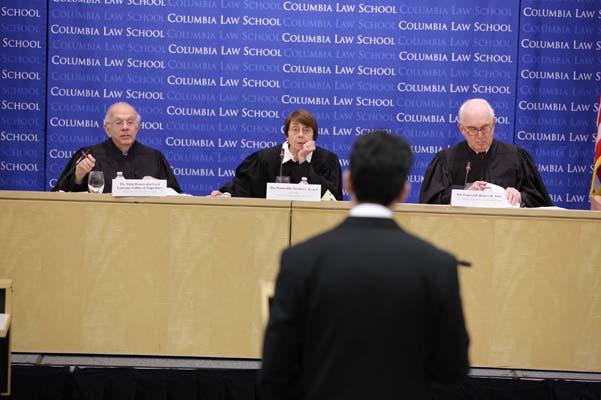 For the case, Nasseri and Cajigas argued that high school student James Madison had his right to free expression violated and was a victim of sex discrimination when he was suspended for wearing a pink dress in support of anti-Proposition 8 rallies. Proposition 8 is the ballot measure passed in California that banned gay marriage in that state. A lower court had ruled in favor of the school district.
As is the case in many appeals courts, the students spent more time answering questions from the judges rather than presenting their original arguments.
“I was ready to get hit with questions, but they were tough, tougher than I expected,” Nasseri said of the judges. “That was nice, though. I prefer a hot bench.”
Lynch said the students all handled themselves well, particularly during rebuttal arguments.
“It’s interesting to see how you got into your cases on your feet and this was thinking independently of what was in your briefs,” Lynch told them. “You listened to what we said and you each came up with what was the core of your argument. I thought that was particularly impressive.”
Lynch said her mentor was Henry Monaghan, the Harlan Fiske Stone Professor of Constitutional Law, one of her professors at Boston University Law School, where she graduated in 1971. “I came to understand that if I could withstand questioning by Henry Monaghan on federal jurisdiction, I could go on and be a litigant and argue things before courts,” she said.
Brittney Pescatore ’10, the Moot Court’s Director, wrote the problem on which the case was based. Professors Katherine Franke, Jamal Greene, and Gillian Metzger provided input on the problem, while Professor Nathaniel Persily helped with the bench memorandum.
Also on the Moot Court Executive Committee were Dina Hoffer ’10; James Jimmerson ’10, and Kelly Villamar ’10. Professor Philip Genty serves as the board’s advisor.
This was the 85th anniversary of the Harlan Fiske Stone Moot Court, named after a member of the Class of 1898. Stone became Law School dean in 1910, and was named to the U.S. Supreme Court 15 years later. He was elevated to Chief Justice in 1941, a post he held when he died in 1946.
The Law School’s Moot Court Program is supported by a grant from Milbank, Tweed, Hadley & McCloy.
(Photographs by Jon Roemer)
Columbia Law School, founded in 1858, stands at the forefront of legal education and of the law in a global society. Columbia Law School joins its traditional strengths in international and comparative law, constitutional law, administrative law, business law and human rights law with pioneering work in the areas of intellectual property, digital technology, sexuality and gender, criminal, national security, and environmental law.
Visit us at http://law.columbia.edu
Follow us on Twitter http://www.twitter.com/columbialaw