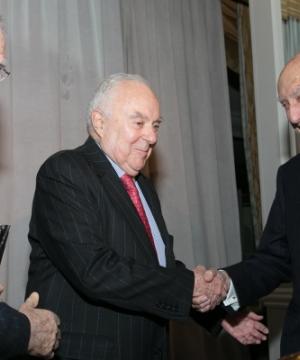 Columbia University President Emeritus Michael I. Sovern ’55 (pictured, far right) was honored last week by the National Center on Addiction and Substance Abuse (CASA) for his decades-long dedication to fighting addiction and shaping the organization since it was established 25 years ago.

Sovern, the Chancellor Kent Professor of Law and former dean of Columbia Law School, was presented with CASA’s Distinguished Achievement Award for helping to shape CASA and establish it as an affiliate of Columbia University. CASA is the nation’s leading addiction policy and research organization, and was founded by former U.S. Secretary of Health, Education, and Welfare Joseph A. Califano Jr. in 1992. Sovern served as a member of CASA’s board during its first year.

Other leaders honored at the May 10 awards dinner held at The Pierre in Midtown Manhattan included: William M. Lewis Jr. managing director and co-chairman of investment banking at Lazard; Steve Rusckowski, chairman, president, and CEO of Quest Diagnostics Incorporated; and Dr. Herbert Pardes, executive vice chairman of the NewYork-Presbyterian board of trustees.

Sovern became dean of the law school in 1970, Columbia University provost in 1979, and the University’s 17th president in 1980, serving in that role for 13 years. He chronicled his career and life in an autobiography, An Improbable Life: My Sixty Years at Columbia and Other Adventures, published in 2014 by Columbia University Press.

Outside of Columbia, Sovern has served in a variety of high-profile legal, business, administrative, and philanthropic roles. He has served on the board of the Pulitzer Prize and the NAACP Legal Defense Fund, and as a trustee of President Bill Clinton’s Legal Defense Trust.

Sovern is a former arbitrator for disputes between numerous private companies and public agencies and the unions representing their employees.