The former deputy solicitor general tells law students to hold fast to their vision of the public interest. 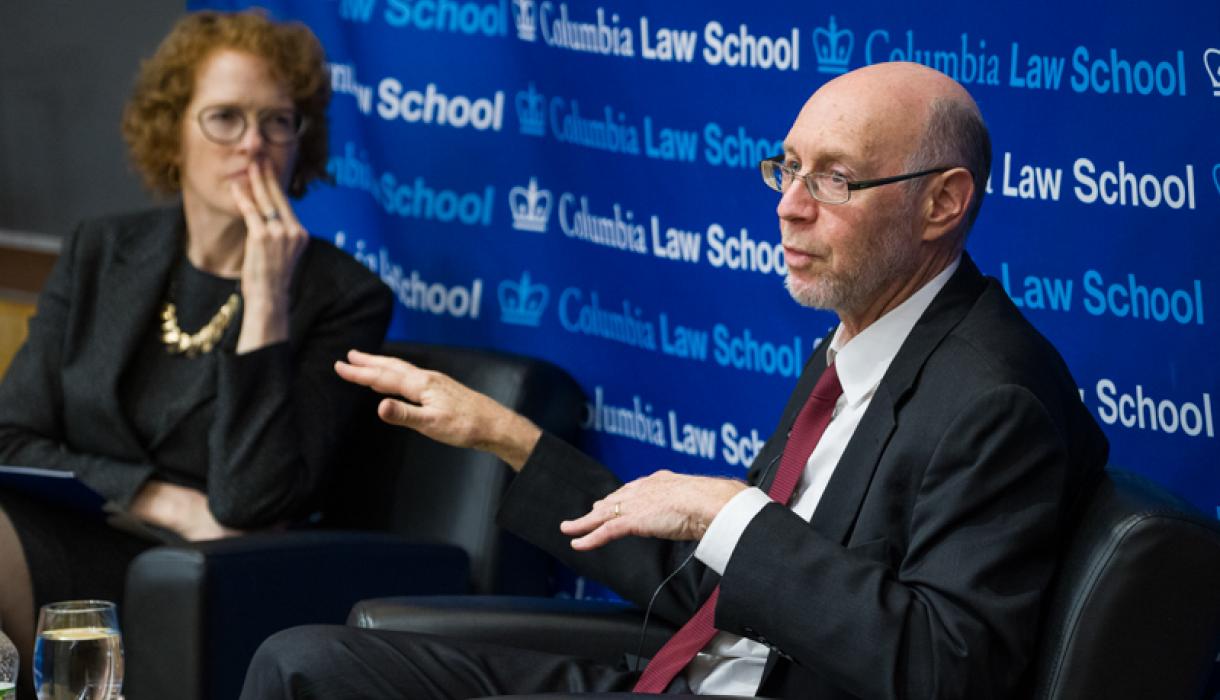 Michael Dreeben’s first oral argument before the U.S. Supreme Court in 1989 was a trial by fire. He was terrified. Justice Antonin Scalia made a joke at the expense of the government, Dreeben’s client. And the Court ruled 9–0 in favor of the position argued by the opposing counsel, a guy named John Roberts.

Fortunately, that event has become just another funny story to tell in light of Dreeben’s nearly 30-year career arguing cases before the U.S. Supreme Court as deputy solicitor general for the criminal docket. Dreeben has joined a legal group even more select than the bench where now-Chief Justice Roberts sits: he is one of only eight people in the history of the Court to have argued more than 100 cases there. (The list includes 19th-century politician and orator Daniel Webster.)

Speaking with Gillian Lester, Dean and the Lucy G. Moses Professor of Law, at a talk on January 29 sponsored by Social Justice Initiatives, Dreeben offered insights into his years arguing before the court, the value of the Office of the Solicitor General, tips for arguing cases in front of the Supreme Court, and how to find satisfaction in a law career.

A Way Into the Law
Perhaps appropriately, Dreeben’s interest in criminal law started in the dark: watching the 1981 movie Prince of the City, a drama about corrupt cops in New York. A pivotal scene shows lawyers debating whether to prosecute a crucial cooperating witness, who turns out to be more corrupt than initially recognized.

“I sat there in that movie theater and I said, I want to be in that room, where decisions are being made like that, where people are passionately free to debate out their own vision of the public interest.”

For Dreeben, that room has been the Supreme Court. “Your credibility and your sense of integrity and your sense that you are part of a process larger than yourself in the law is a critical dimension of being a happy and successful lawyer,” he said. The solicitor general’s office is “a very purified, distilled version of that. So that’s why I felt very privileged [to work there].”

As deputy solicitor general, Dreeben handled the criminal docket for the Office of the Solicitor General but over his career handled a range of issues including public corruption, financial fraud, technology and privacy issues, hate crimes, and the First Amendment. In 2016, he took a leave to work on the investigation into Russian interference in U.S. elections led by special prosecutor Robert Mueller; he left government service in 2019 and now practices with O’Melveny and teaches at Georgetown Law.

How to Argue Before SCOTUS
Dreeben’s nerves eventually subsided after his first case, when “white as a sheet,” he stared at the enormous clock in the Supreme Court waiting for the justices to walk in at 10 a.m. With experience, he developed a four-step process to prepare for oral arguments before the Court.

He also learned that, except perhaps in cases involving deep ideological commitment, justices “don’t always walk in knowing” their decision. Not every question a justice poses is intended for the advocates; sometimes it is justices talking to each other, “sort of like fireflies signaling to each other in the night.”

Live Your Beliefs
“Your job as a lawyer is to further the client’s interest, but not at the expense of what you believe at the deepest fundamental level,” Dreeben said. But faced with an unappetizing case, he said, lawyers should delve deeply into it before deciding whether to walk away. “You really need to understand that case and the position that rubs you the wrong way. A lot of things you do as a lawyer have a different appearance at a granular level than they do at the 30,000-foot level. . . . If you get to know it better, you may find out that it’s more nuanced than you expected it to be.”

But not always. The flip side, Dreeben said, “is being sensitive enough to recognize when you’ve reached the point where you say, ‘I can no longer look at myself in the mirror or tell my husband or wife or partner or kids what I’m doing.’ That should be a red line.”