Mia Robertshaw '10 Honored at 2008 Abely Awards
COLUMBIA’S MIA ROBERTSHAW HONORED
AT 12th ANNUAL ABELY AWARDS
Recognized for Her Commitment to Work
With Victims of Domestic Violence
Press Contact: Sonia von Gutfeld, 212-854-1453, [email protected]
Public Affairs Office, 212-854-2650
September 26, 2008 (NEW YORK) -- Columbia Law School student Mia Robertshaw ’10, the 2008 Maryellen Abely Fellow, was among those honored at the 12th annual Abely Awards on September 22. The fellowship, underwritten by Davis Polk & Wardwell, funds a summer internship at Sanctuary for Families’ Center for Battered Women’s Legal Services and is given annually to a Columbia Law School student who is committed to working with victims of domestic violence.
The Abely Awards, held each year by Columbia Law School, Sanctuary for Families and Davis Polk & Wardwell, honor those who work to improve the lives of victims of domestic violence. The three awards presented at the ceremony commemorate the life and work of Law School alumna Maryellen Abely ’87, a pro bono attorney at Sanctuary for Families and associate at Davis Polk & Wardwell.
“My work as an intern at Sanctuary for Families this past summer was extremely satisfying because it was substantive and had a very direct impact on clients’ lives,” said Robertshaw. “It was also satisfying to see results during the course of the internship, as the cases were constantly developing and moving in new directions.”
As a Sanctuary intern, Robertshaw worked on an order of protection case for a victim of domestic violence in Venezuela and researched family law issues, family court jurisdiction, judicial recusal standards and parental rights to take a child out of the country. At Columbia Law School Robertshaw has served on the Education Advocacy Project and, prior to coming to the Law School, provided domestic violence support services at a women’s center in Santa Cruz, Calif.
This year’s Abely Award for Leading Women and Children to Safety went to Teresa Columba Ulloa Ziáurriz, director of the Coalition Against Trafficking in Women in Latin America and the Caribbean, and to María Guadalupe Morfín Otero, Special District Attorney for Violent Crimes Against Women for the Office of the Attorney General of México. The award has been given annually since 1997 to a person who has made a difference in the lives of victims of domestic violence and who shares the compassion, zeal, energy and dedication for which Maryellen Abely, who after a long battle with cancer died in 1995 at age 33, is remembered.
Dorchen Leidholdt, director of Sanctuary’s Center for Battered Women’s Legal Services, presented the award to Ziáurriz and Morfín. Leidholdt described how earlier this year the two lawyers collaborated with Sanctuary for Families to rescue 6-year-old twins from a Mexico City brothel where their father had housed them after abducting them from the New York City home of their mother, a Sanctuary for Families client.
“This evening showcases the global reach of violence against women and children,” said Columbia Law School Dean for Social Justice Initiatives Ellen Chapnick in her remarks at the award ceremony, attended by more than 200 people. Chapnick also said that Robertshaw “gives us hope for the future.”
The law firm of Davis Polk & Wardwell received this year’s Abely Pro Bono Achievement Award, created in 2001 to recognize the contributions of attorneys who have consistently demonstrated professional commitments to improving the lives of Sanctuary’s clients. Partner Sharon Katz accepted the award on behalf of the firm.
The partnership between Sanctuary for Families and Davis Polk & Wardwell began in 1989, when Maryellen Abely, then an associate at Davis Polk, opened the firm’s first pro bono client matter ever by partnering with Sanctuary for Families and started the pro bono relationship that continues today.
Chief Judge of the State of New York Judith S. Kaye, the first recipient in 1997 of the Abely Award for Leading Women and Children to Safety, presented the Pro Bono Achievement Award to Davis Polk. In her remarks, Kaye said that Abely’s legacy has influenced her own work to “deal with the scourge of domestic violence.” 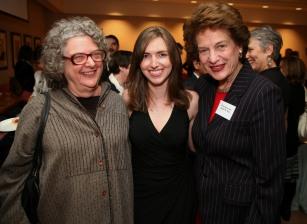 Sanctuary for Families is the largest nonprofit in New York State dedicated exclusively to serving domestic violence victims and their children. Each year, Sanctuary helps thousands of victims and their children build safe lives by offering a range of high quality services to meet their complex needs. These services include clinical, legal, shelter, children’s and economic stability services. Sanctuary also works to end domestic violence and its far-reaching impact through outreach, education, and advocacy.
Davis Polk & Wardwell, under an initiative created by Ogden “Denny” Lewis and led in its early years by Maryellen Abely, for more than a decade has donated thousands of hours of legal services to some of Sanctuary’s most complicated cases in the areas of family and immigration law. Davis Polk’s asylum clinic provides Sanctuary clients who have survived domestic violence, female genital mutilation, threats of honor killing, and/or forced marriage from a diverse range of countries. In the exceptionally challenging legal area of gender-based asylum claims, it has coordinated teams that paired Columbia Law School students with staff lawyers in Sanctuary’s Immigration Intervention Project.
Columbia Law School, founded in 1858, stands at the forefront of legal education and of the law in a global society. Columbia Law School joins traditional strengths in international and comparative law, constitutional law, administrative law, business law and human rights law with pioneering work in the areas of intellectual property, digital technology, sexuality and gender, and criminal law.
Photo credit: Michael Dames