Mental Health and the War in Yemen

Clare Skinner ’20 LL.M. and Ellie Dupler ’20 report on their recent trip to Beirut where they attended a workshop tied to the Human Rights Clinic's ongoing advocacy work on the right to mental health in Yemen. 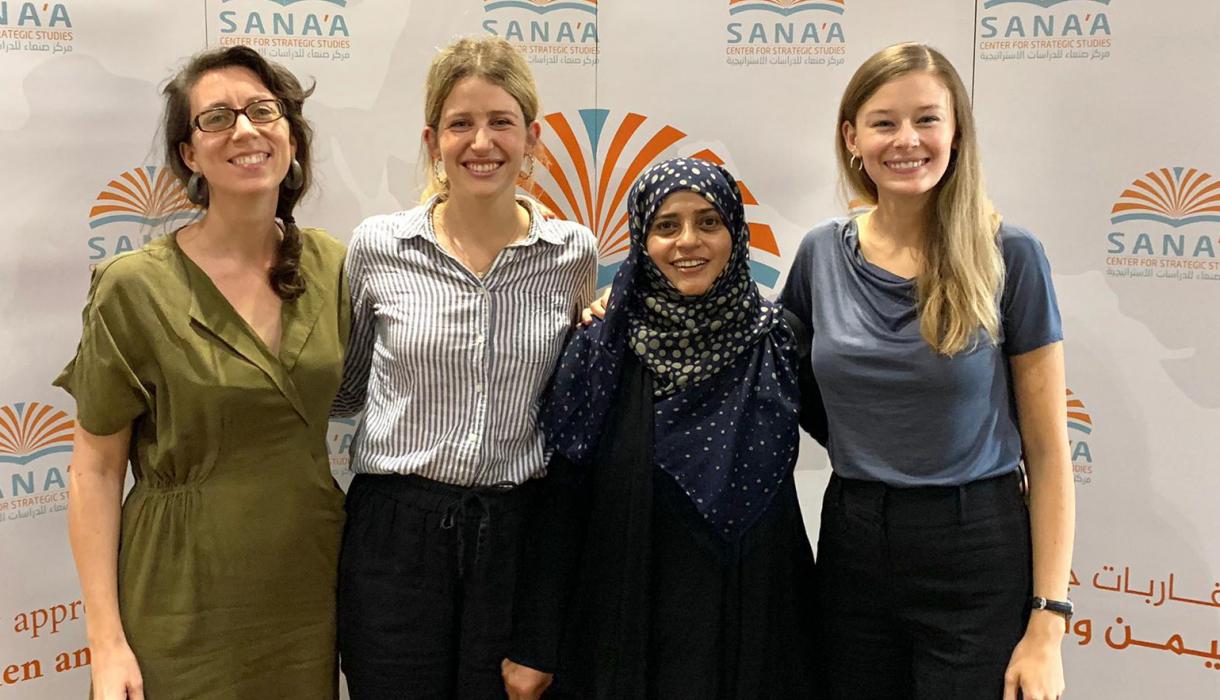 The conflict in Yemen is now entering its fifth year. In October, Law School Clinical Professor Sarah Knuckey, Lieff Cabraser Clinical Professor of Human Rights and director of the Human Rights Clinic, and students Clare Skinner and Ellie Dupler joined 35 diplomats, academics, journalists, and NGO representatives in Beirut, Lebanon, for an intensive course on the causes and effects of the conflict as well as prospects for peace.

“Given the incredibly complex dynamics in Yemen and the sheer number of international and national actors involved, it is difficult to comprehend the conflict and to get accurate information about what is happening on the ground,” says Skinner, an Australian who has a background in public interest law and commissions of inquiry. “The opportunity to attend this training and hear directly from key Yemeni actors was invaluable, and an unparalleled learning experience.”

The workshop, which the students attended as part of the clinic’s ongoing advocacy work with Yemeni partners on the right to mental health, was conducted by the Sana’a Center for Strategic Studies, an independent research and policy think tank based in Yemen. The executive director of the center, Maged Al-Madhaji, says that the training is one of the center’s most important projects: “It provides a platform for Yemeni voices and facilitates the dissemination of accurate information on the country as well as shaping the narratives on Yemen on all levels.”

Since 2017, the Human Rights Clinic, the Sana’a Center for Strategic Studies, and Columbia University Mailman School of Public Health have partnered to conduct research on the magnitude of psychological distress in Yemen and push for improvements in how the government of Yemen and the international community respond to the acute mental health needs of Yemenis. In a 2017 briefing paper, “The Impact of War on Mental Health in Yemen: A Neglected Crisis,” the partners revealed the serious state of mental health in Yemen. Mental health services in Yemen, however, are still sparse.

“The training complemented ongoing work between the Sana’a Center and the Human Rights Clinic to conduct urgently needed research on the mental health situation in Yemen,” says Dupler, who had previously done research on the intersection of mental health and intimate partner violence in Jordan and Nepal. Not only was the Law School team able to connect with individuals who work on issues related to the conflict in Yemen, they were also able to develop a deeper understanding of these issues to inform their clinic work.

The Columbia Law students connected with more than 30 speakers at the training, including senior representatives of local parties to the conflict; government officials; former presidents and ministers; tribal leaders; economic, political, and security experts; artists; and journalists. Among the major topics covered were Yemeni sociopolitical dynamics, including current events taking place in underreported governorates such as Al-Mahra and Shabwa, as well as the war economy in Yemen and possible scenarios and outcomes of the recent Riyadh Agreement.

“Hearing from so many perspectives on issues that directly affect the right to mental health in Yemen, as well as other intersecting human rights, will enrich our research with Sana’a Center on the different kinds of trauma exposure in Yemen, the effects on the population, and local needs and coping strategies,” says Dupler.

Other topics included the experiences of minorities in Yemen; the role of poetry in Al-Qaeda in the Arabian Peninsula and ISIS in Yemen; the Houthi movement and Zaidism; recent economic and humanitarian developments; prospects for peace; the human rights situation; and security threats posed by armed groups.

Despite the challenges, including those discussed at the workshop, the Sana’a Center and Columbia continue their work. Through interdisciplinary research and human rights advocacy, the team is exploring more ways to raise awareness about the war’s impact on the right to mental health and how poor mental health may impact peace efforts and transitional processes.

Learn more about the Columbia Law School Human Rights Clinic and its work.