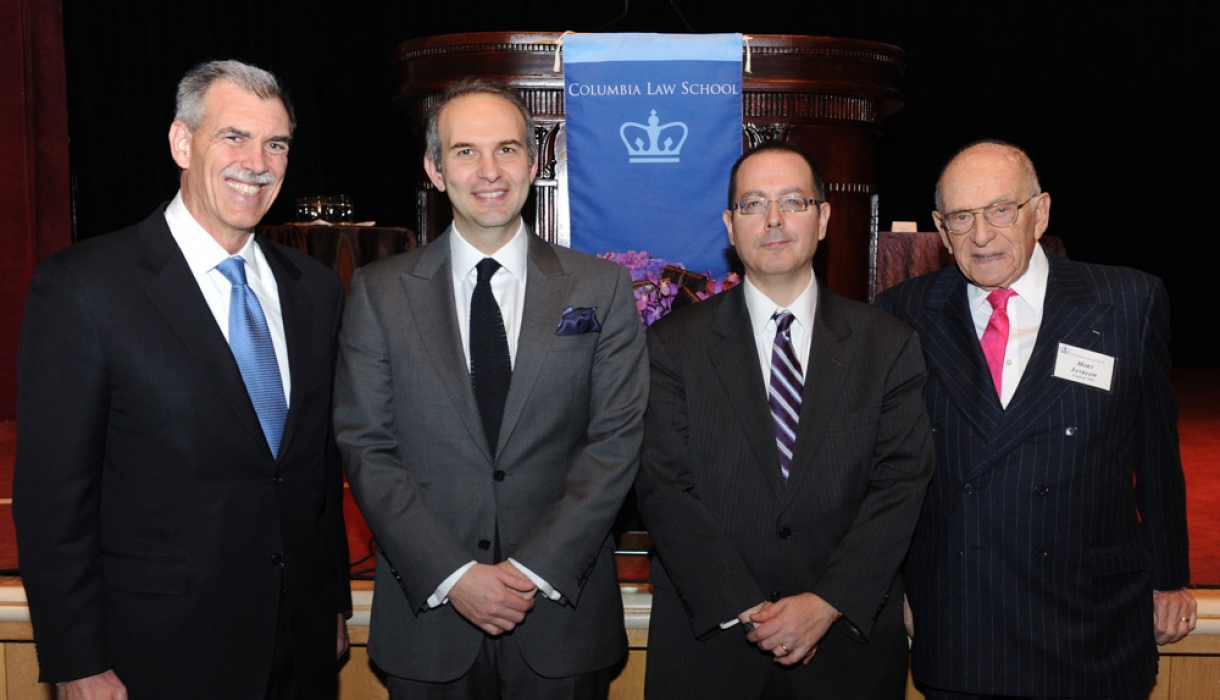 David M. Schizer, Dean and the Lucy G. Moses Professor of Law and Harvey R. Miller Professor of Law and Economics, introduced the honorees at the ceremony after opening remarks from Columbia Law School Association President Michael P. Beys ’99.
“Every year at our Winter Luncheon, we celebrate the magnificent contributions of our school to the law, to our nation, and to the world,” Dean Schizer said. “Through our ideas, and through the talents and commitments of the students we train, we help to shape the future. Our two distinguished honorees, Mort Janklow and Don Verrilli are powerful examples of our Columbia community’s influence on the world.”
Both honorees credited Columbia Law School for the profound influence it has had on their careers and for shaping their professional development.
“The most important thing Columbia Law School has given to me it gave to me a long time ago, and that was an enduring inspiration—the belief that I could live a life in the law that means something and that I could be happy and fulfilled doing it,” Verrilli said.

Janklow also spoke of the Law School’s important role in his career, describing his transition from a lawyer to a literary agent.

At the Law School, he said, “I thus quickly learned the lessons of self-discipline and hard work and the joy of achievement derived there from, and I have never lost that sensibility, which has served me so well in my career.”
Janklow has represented best-selling authors, National Book Award and Pulitzer Prize winners, celebrities, scholars, scientists, journalists, presidents, poets, pundits, and even a pope.
He was working as the founding partner of his own law firm in 1972 when his friend and client William Safire asked him to handle negotiations for a book Safire was writing about President Richard Nixon. Janklow obliged and negotiated a contract that included a large advance for Safire’s book. After the Watergate scandal broke, the original publisher tried to back out. Janklow ushered in a new era for authors when he won the right for Safire to retain his advance, recaptured the rights to the book, and struck a deal with another publisher. Before the Fall became a best seller.
Janklow has maintained a strong commitment to the arts and to education. At Columbia Law School, he endowed the Morton L. Janklow Chair in Literary and Artistic Property Law, now held by Professor Jane C. Ginsburg. Janklow also serves on the advisory board for Columbia Law School’s Kernochan Center for Law, Media and the Arts, and he is a frequent visiting lecturer on the subject of intellectual property law.
Janklow’s co-honoree, Donald Verrilli, is the 46th Solicitor General of the United States. Widely recognized as one of the top litigators in the nation, Verrilli first joined the Justice Department in 2009 as associate deputy attorney general, focusing on domestic and national security policy. He was appointed deputy White House counsel the following year.

Prior to joining the Obama administration, Verrilli was a longtime partner at Jenner & Block in Washington, D.C., where he co-chaired the firm’s Supreme Court practice. He handled numerous high-profile cases before the Supreme Court and various federal courts of appeals, including MGM Studios, Inc. v. Grokster, which established that companies building businesses based on the unauthorized distribution of copyrighted works can be liable for inducing infringement; and Wiggins v. Smith, which established principles governing the right to effective assistance of counsel at capital sentencing.

Throughout his career in private practice, Verrilli maintained an active pro bono practice and received numerous awards for his service.
The Medal for Excellence is given annually to alumni or faculty who exemplify the qualities of character, intellect, and social and professional responsibility that the Law School seeks to instill in its students.