Medal for Excellence Awarded to Miriam Goldman Cedarbaum ’53 and Roberta A. Kaplan ’91 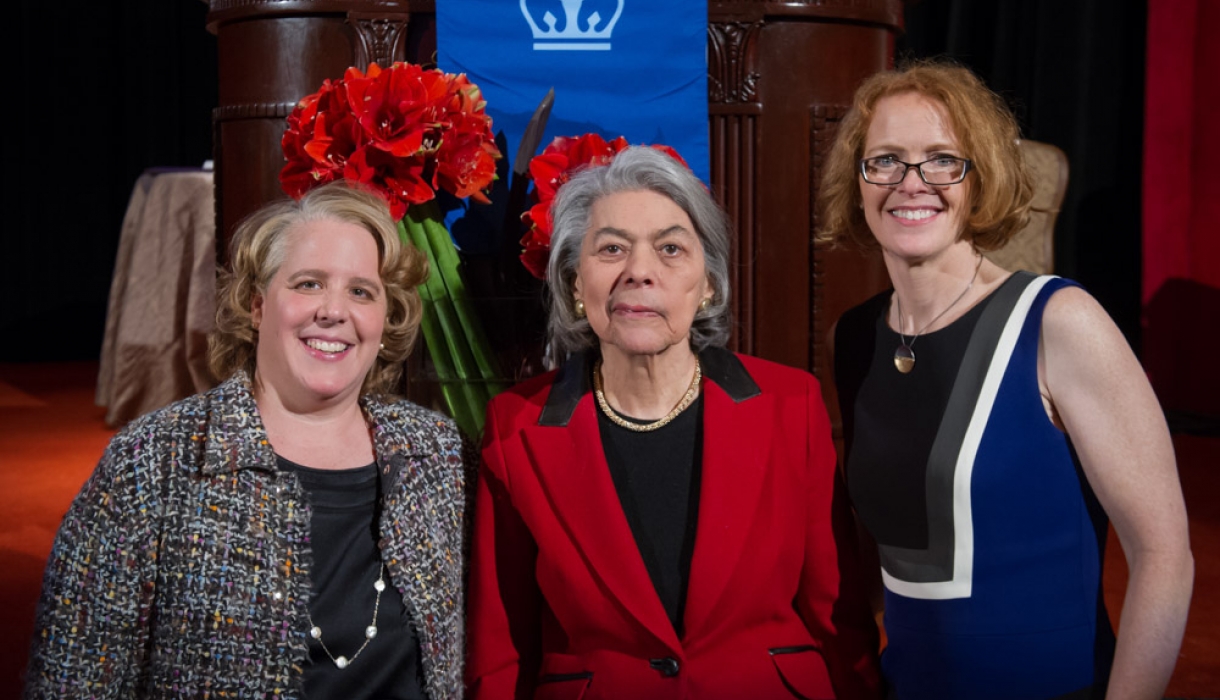 2015 Medal for Excellence recipients Roberta A. Kaplan '91 and U.S. Senior District Judge Miriam Goldman Cedarbaum ’53 with Dean Gillian Lester, right.
New York, February 27, 2015—Columbia Law School Dean Gillian Lester today awarded The Medal for Excellence to two pioneering women in the law, U.S. Senior District Judge Miriam Goldman Cedarbaum ’53 and civil rights attorney Roberta A. Kaplan ’91, in an award presentation that featured a special video address from U.S. Supreme Court Justice Sonia Sotomayor.
“We’re going to give a whole new meaning to the term ‘ladies’ lunch,’” Columbia Law School Association President Laurie Magid ’85 told the audience to loud applause, noting the legal prowess in the lineup of honorees and speakers.
In addition to Sotomayor, who introduced Cedarbaum, U.S. District Judge Colleen McMahon of the Southern District of New York offered the introduction for Kaplan. The 2015 Medal for Excellence ceremony was the first for Dean Lester, who took the helm of Columbia Law School in January.
“It’s a privilege and an honor to be part of the distinguished legacy of Columbia Law School,” said Lester, the Lucy G. Moses Professor of Law, noting the institution’s curricular and financial success and the influence of alumni who serve as leaders in both the public and private sector.
Cedarbaum and Kaplan exemplify such leaders, Dean Lester said.
“Today, we honor two graduates whose selfless work from the bench and the bar has had a profound impact on immeasurable lives,” she said.
Sotomayor recalled Cedarbaum coming to visit her chambers on Sotomayor’s first day in the Southern District—a tradition on that bench.
“That’s Miriam,” Sotomayor said. “Not only an observer of tradition but a person who honors her commitments.”
Sotomayor said Cedarbaum is emblematic of The Medal for Excellence, which the Law School presents annually to alumni or faculty who exemplify the qualities of character, intellect, and social and professional responsibility.
“In all of her work, she has been committed to public service,” Sotomayor said. “I don’t know another person who is more deserving of today’s award.”

Cedarbaum, who has served on the bench in the Southern District of New York for 29 years, said the Law School helped guide her career path and professional development.

“The Law School really was an alma mater, a nourishing mother, who helped shape me and set me on my life’s course in profound ways,” she said. “Columbia Law School became my home away from home.”
The judge offered some memories from her time on campus—which she entered for the first time 64 years ago—including courses with professors Karl Llewellyn, who she said locked the classroom doors promptly at 9:00 a.m, Herbert Wechsler ’31, and Charles Black.

Kaplan, a powerhouse litigator known for winning the landmark U.S. Supreme Court ruling striking down a provision of the federal Defense of Marriage Act (DOMA) that banned recognition of same-sex marriages, was welcomed to the stage after a warm introduction from her longtime friend McMahon, a mentor and fellow Ohioan.

In 1993, McMahon worked on a state jury instructions committee to which Kaplan—as a young associate at Paul, Weiss—was also assigned. McMahon described Kaplan as a “veritable tornado” overflowing with initiative, skill, and confidence.
“She had absolutely no clue she was supposed to be the junior member of our team,” McMahon joked.
Referencing Kaplan’s historic DOMA win but also her representation of Fortune 500 companies and startups, McMahon said Kaplan is not just a great “woman lawyer” or a great “gay rights lawyer.”
“I will not limit her so,” she said. “She should be ranked with the finest litigators of all time with no modifiers except the one that matters: winner.”

Kaplan said Columbia Law School helped her fulfill a dream of becoming a New York attorney. She said she hoped her 2013 representation of lesbian Edith Windsor in the DOMA case would help people fight off any cynicism toward the law.

“What the Windsor decision means is that courts matter, the Constitution matters, and what we do as lawyers every single day really, really matters a lot,” Kaplan said.
She noted that another former civil rights litigator, fellow Columbia Law School alumna and U.S. Supreme Court Justice Ruth Bader Ginsburg ’59, said that Windsor “reflects the genius of our Constitution.”
The Medal for Excellence ceremony—which drew more than 300 alumni—served as a reminder of the profound impact of the Law School’s work and the contributions of its faculty, students, and graduates. Both Dean Lester and McMahon referenced a quote from the late Professor Harvey J. Goldschmid ’65 who once said it’s important “to think about not only what the law is, which students need to know, but what it ought to be.”
Cedarbaum and Kaplan, who are also both past recipients of the Myra Bradwell Award given by the Columbia Law Women’s Association, have pursued that ideal in their work.
Cedarbaum, one of eight women in her 1953 class, has been involved in dozens of high-profile cases as a judge, including the sentencing of Faisal Shahzad, who pleaded guilty in 2010 to an attempted car bomb attack in New York City’s Times Square. After graduating from the Law School, she served as a clerk to Judge Edward Jordan Dimock of the United States District Court for the Southern District of New York. She also served as an assistant U.S. attorney for the Southern District of New York; as an attorney in the Office of the Deputy Attorney General of the United States; as first assistant counsel for the New York State Moreland Act Commission on the Alcoholic Beverage Control Law; as associate counsel at the Museum of Modern Art; and as a senior attorney at Davis Polk & Wardwell.
Since Kaplan’s pro bono win in the Windsor case, courts across the country have relied on the ruling to extend equal rights to gays and lesbians. But Kaplan also represents a diverse range of clients, including Citgroup, JP Morgan Chase, Fitch Ratings, CI Capital Partners, and the Minnesota Vikings, whom she represented in connection with the team’s settlement with former punter Chris Kluwe. Kaplan has also done work for a number of companies in the “sharing economy,” including airbnb. The Financial Times selected Kaplan as its “Most Innovative Lawyer of the Year” in 2014; Kaplan also served as the keynote speaker at Columbia Law School’s graduation ceremony that year.
Past recipients of The Medal for Excellence include: Ginsburg, U.S. Solicitor General Donald B. Verrilli, Jr. ’83, U.S. Attorney General Eric H. Holder, Jr. ’76, and Judge Jack B. Weinstein ’48, U.S. Securities and Exchange Chair Mary Jo White ’74, and U.S. Department of Homeland Security Secretary Jeh C. Johnson ’82.