New York, Feb. 10, 2011—Columbia Law School awarded its highest honor, the Medal for Excellence, to Max W. Berger ’71 and Stephen H. Case ’68. The presentation took place during the annual Winter Luncheon on Friday, Feb. 4, at the Waldorf=Astoria, where nearly 400 guests celebrated the honorees’ distinguished careers, as well as their longtime commitment to the Law School.

David M. Schizer, Dean and the Lucy G. Moses Professor of Law, kicked off the event by introducing Max Berger, a founding partner of Bernstein Litowitz Berger & Grossman and a member of the Law School’s Dean’s Council.

Berger has been recognized by industry publications as one of the country’s top civil litigators and has obtained four of the largest securities fraud recoveries in history, in addition to prosecuting many noteworthy civil cases. At the Law School, he and his wife, Dale, funded a fellowship to support students pursuing public interest legal careers. He also helped secure funding from his firm to establish the Bernstein Litowitz Berger & Grossmann LLP Fellowship, which is awarded to graduates involved in anti-discrimination work. 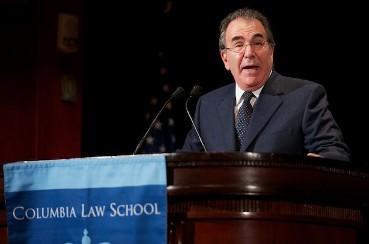 “To be honest, knowing Max Berger is a somewhat humbling experience,” Dean Schizer remarked. “[He] exemplifies the highest ideals of our intellectual community.”

Berger reflected on his graduation, some 40 years ago, when he received his diploma while holding his daughter Meredith, then just a year old. Berger said he did not fully appreciate the power of his J.D. degree at the time, but he soon realized that those three years at the Law School had been a transformative experience.
“[Columbia Law School trains] students so that each of us has the confidence be our own person and not fit into any particular mold,” he added.

Dean Schizer also introduced Stephen Case, the managing director and general counsel of Emerald Development Managers. As a member of the Law School’s Dean’s Council and a Columbia University trustee for more than a decade, Case has made a lasting impact on the University community. He helped spearhead the Davis Polk & Wardwell Scholarship, which has benefited numerous Law School students over the years, and he established the Stephen H. Case Faculty Research Fund to support cutting-edge scholarship at the Law School.

“Steve is the kind of leader who commands the deepest admiration and, also, affection,” Dean Schizer noted. “[He] has a way of motivating those around him to aim higher, to dig deeper, and to do it with a smile—in short, to be more like him.” 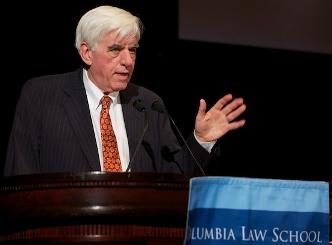 Case expressed his humble appreciation for being selected to receive the Law School’s highest honor, gesturing toward the crowd as he spoke of the remarkable network of alumni. “The greatest strength of Columbia Law School is represented right here,” Case said. “I ask your permission to paraphrase a familiar cliché: There is no one out there who is better to eat with, drink with, or fight with than my brother and sister graduates of the Law School.”

The event also celebrated the many Law School alumni who serve as judges in local, state, and federal courts.

About Columbia Law School
Columbia Law School was founded in 1858, and stands at the forefront of legal education and of the law in a global society. Columbia Law School joins its traditional strengths in international and comparative law, constitutional law, administrative law, business law, and human rights law with pioneering work in the areas of intellectual property, digital technology, sexuality and gender, criminal, national security, and environmental law.