Event Presided Over by Eminent Panel of Judges

New York, April 9, 2012—J. Matthew Schmitten ’13  was named winner of the Lawrence S. Greenbaum Prize for best oral presentation in the final round of the Columbia Law School Harlan Fiske Stone Moot Court Competition. He was also honored for best brief, and served as counsel for the appellee along with Kelly N. Sampson ’12. Counsels for the appellant were William M. Rollins ’12 and Robert M. Bernstein ’13.

The four finalists argued a case written by the competition’s director, Michael Rosenberg ’12, concerning the proper boundaries of federal criminal liability arising from the application of obstruction of justice and computer fraud statutes. Fifty students entered this year’s competition, and the final round was the culmination of a three-round elimination competition in appellate advocacy. 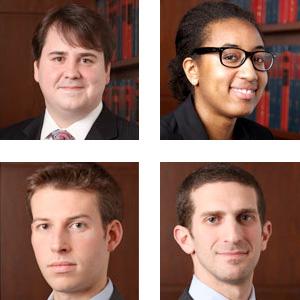 Pictured (clockwise from top left): J. Matthew Schmitten '13,
Counsel for the Appellant, Kelly N. Sampson '12,
Counsel for the Appellant, William M. Rollins '12,
Counsel for Appellee, Robert M. Bernstein '13, Counsel for Appellee.
“All four of this year’s finalists gave standout performances, said Professor Philip Genty, the Everett B. Birch Innovative Teaching Clinical Professor in Professional Responsibility and Director of the Moot Court Program. "They displayed an excellent grasp of the complicated issues in the problem. In addition, they handled the challenging questions posed by the panel with dexterity, poise, and good humor."
The March 26 event marked the 87th anniversary of the Harlan Fiske Stone Moot Court, which was founded at Columbia Law School in 1925 by the Story Inn—a chapter of the legal fraternity Phi Delta Phi. The competition is named in honor of Harlan Fiske Stone 1898 (1872–1946), who was a member of the Story Inn while a student at the Law School.
Stone was named dean of Columbia Law School in 1910. He served as dean until 1924, when President Calvin Coolidge appointed him attorney general of the United States. He was named to the U.S. Supreme Court the following year and was elevated to chief justice in 1941.
The Lawrence S. Greenbaum Prize, awarded annually, was established in 1951 by family and friends, in memory of Lawrence S. Greenbaum 1912.
Columbia Law School’s Moot Court Program is made possible by the generous support of Milbank, Tweed, Hadley & McCloy LLP.