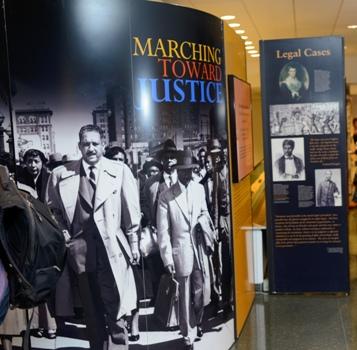 The dramatic exhibit features hundreds of images covering more than 350 years of African-American history, from the arrival of slaves in the Americas in 1619 through the landmark 1954 Brown v. Board of Education ruling that ended legal segregation.
Last week, the Columbia Law School Association and the Columbia Black Law Students Association (BLSA) held a special reception to commemorate the exhibit, and to familiarize visitors with its aim. It was created by the Damon J. Keith Law Collection of African American Legal History at Wayne State University to inform the public about “the fundamental importance of the 14th Amendment and our nation’s ongoing quest to realize the high hopes of the Declaration of Independence.”
The gathering was attended by members of the Law School community, including students, alumni, faculty, and staff, who viewed the temporary installation on the third floor of Jerome Greene Hall. They were addressed during the reception by U.S. District Court Judge Sterling Johnson, (left) a celebrated African American jurist, who retold a personal story of his mother encouraging him to become a lawyer, even though teachers said he should become a carpenter.
Columbia Law School Professor Theodore Shaw, the former director-counsel and president of the NAACP Legal Defense and Educational Fund, shared his own views on the importance of African American lawyers and jurists to our society, and the significance of the exhibit.
I. India Geronimo, director of the collection and former law clerk to The Hon. Damon J. Keith, told guests that the exhibit “celebrates civil rights pioneers who were tireless in fighting for equal justice under the law. We are pleased that the exhibit is currently residing at Columbia Law School, because the school has served as a training ground for many talented civil rights lawyers and judges.”
Since the inaugural showing of “Marching Toward Justice” at the Thurgood Marshall Federal Judiciary Building in Washington, D.C., the exhibit has traveled to more than 40 sites, including locations in San Francisco, Chicago, Boston, Dallas and the U.S. Virgin Islands. The exhibit is the creation of the Damon J. Keith Law Collection of African American Legal History at Wayne State University Law School, where it is housed permanently.
# # #
Columbia Law School, founded in 1858, stands at the forefront of legal education and of the law in a global society. Columbia Law School combines traditional strengths in corporate law and financial regulation, international and comparative law, property, contracts, constitutional law, and administrative law with pioneering work in intellectual property, digital technology, tax law and policy, national security, sexuality and gender, and environmental law.
Join us on Facebook
Follow us on Twitter: www.twitter.com/columbialaw