Columbia Journal of Transnational Law Gives Award to a Leading Expert on International Criminal Justice
New York, Feb. 6, 2012—M. Cherif Bassiouni, who helped create the International Criminal Court in The Hague, will receive the Wolfgang Friedmann Memorial Award from the Columbia Journal of Transnational Law at an award dinner on April 3.
Since 1975 the Columbia Journal of Transnational Law has presented the Wolfgang Friedmann Memorial Award to a distinguished scholar or practitioner who has made outstanding contributions to the field of international law.
“We are thrilled to have as this year’s Friedmann Award recipient a person with such stature and expertise in the field of international criminal justice,” said P. Nicholas Kourides ’71, deputy general counsel of American International Group, Inc., and a member of the journal’s board of directors.
“Professor Bassiouni’s contributions to the creation of the International Criminal Court are widely acclaimed,” Kourides added. “He has written extensively on violations of human rights and criminal law and is one of the renowned authorities in this field.  Being nominated for the Nobel Peace Prize for his work in the field of international criminal law is confirmation of his significant contributions.” 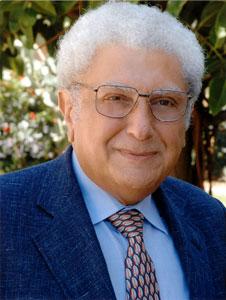 M. Cherif Bassiouni
Bassiouni, who was born in Cairo, is a distinguished research professor of law emeritus at DePaul University College of Law in Chicago. As a practicing lawyer, he has handled many international cases on extradition and international cooperation in criminal matters, and coordinated complex litigation on matters involving international law. He has served the United Nations in a number of capacities and has been a consultant to the U.S. Department of State and U.S. Department of Justice.
In 1999, Bassiouni was nominated for the Nobel Peace Prize for his work in the field of international criminal justice and for his contribution to the creation of the International Criminal Court.
“I am honored to follow a long line of distinguished recipients of an award which preserves the memory of a distinguished internationalist,” Bassiouni said.
Former Friedmann award recipients have included George Mitchell, the former U.S. special envoy for Middle East peace, and Boutros Boutros-Ghali, the former secretary-general of the United Nations.
The award is given in memory of the Journal’s founder, Columbia Law School Professor Wolfgang Friedmann. Friedmann, a native of Germany, emigrated to the United States and taught at the Law School from 1955 until his death in 1972. He passionately advocated for a world order based on mutual respect among nations, and is best known for his denunciations of the Nazi Party when he worked as a jurist in Germany in the early 1930s.
Founded in 1961, the Journal has showcased the work of generations of international law scholars. It now has more than 1,000 subscribers, one-third of whom live outside the U.S. in more than 60 countries.