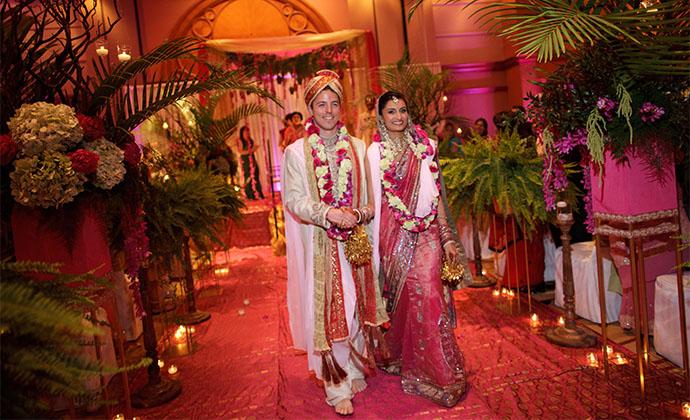 When they were 2Ls, Nina Yadava ’08 and Travis Davis ’08 were introduced by friends at the annual Dean’s Cup charity basketball game against New York University School of Law. On the subway ride from Greenwich Village back to Morningside Heights, Travis casually dropped into conversation a story about going to Milk & Honey, a reservation-only downtown bar with an unlisted phone number. “I asked him if he’d share the number with me,” recalls Nina. “He said, ‘No, but I will take you there if you like.’”

It was supposed to be their first date—they were on the waitlist—but instead, they went bar hopping on the Lower East Side while waiting unsuccessfully for a table to open up. A few months later, they not only made it to Milk & Honey but also became a couple. The sports theme carried on to another of their favorite Law School memories: Travis’s Law School softball team traveled to the University of Virginia for a weekend tournament when they were 3Ls, and Nina and some of her friends tagged along to cheer them on. 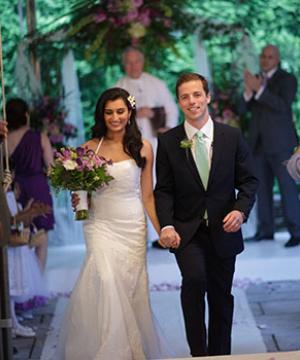 When they married in June 2011 in Chicago, Nina was an associate at Jones Day (she is now the hiring partner of the New York City office) and Travis was an associate at Gibson, Dunn & Crutcher (he is now in-house counsel for the Hearst Corp., also in New York). Their wedding was a five-day affair, which included a “Catholic-style” ceremony on Friday night and a Hindu ceremony on Saturday. “We couldn’t be married in a Catholic church because I’m not Catholic,” says Nina. “So we found a former priest, who happens to be married to a former nun, and he officiated,” she says.

For the Hindu ceremony, Nina wore a sari and Travis wore a kurta, which were draped by lavish garlands of orchids, roses, and carnations. At the reception for 500 guests, there was a DJ that played both Indian and western music and dancing late into the night.

Now living in the Fort Greene neighborhood of Brooklyn, New York, with their 3- and 5-year-old daughters, the couple try to balance their schedules so they don’t work late on the same nights. “There’s an ebb and flow to corporate law, and sometimes it flows for both of us, which can be challenging,” says Travis. “Fortunately we both understand that the demands of a case or deal can be unpredictable.” 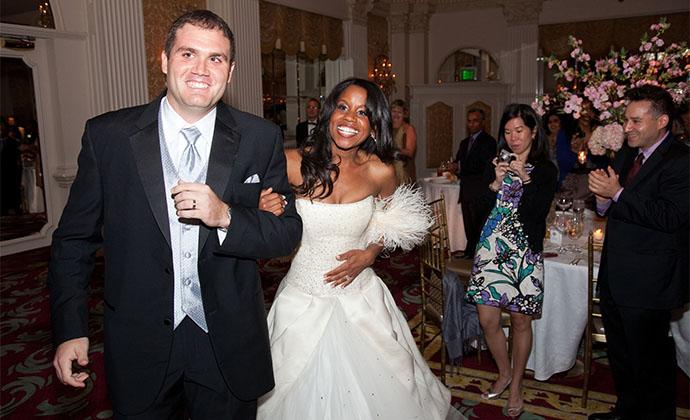 Adiya Dixon Wiggins ’08 and Erin Wiggins ’08 made a strong impression on one another when they met in Contracts at the beginning of their 1L year. “He sat right in front of me and was the kid who knew everything,” recalls Adiya. “He’d say something smart, and we’d all go quiet.” Erin was initially smitten by Adiya’s style. “I remember her wearing these awesome boots. They were the sexiest thing I’d ever seen,” says Erin, who courted Adiya with romantic, chivalrous gestures. He brought a cherry blossom bouquet to class one day because he knew she was homesick for Japan, where she had lived for five years before law school. Another time, before Adiya was leaving for an emotional trip after her aunt passed away, Erin showed up at her apartment at 6 a.m. with chocolate chip pancake batter to make her breakfast. “They were the best pancakes I’d ever tasted,” she says. 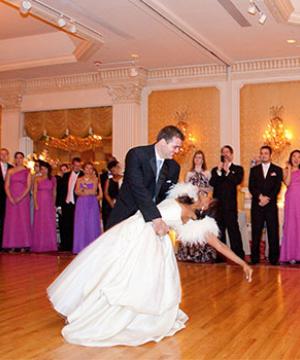 When they married in 2011 in Garden City, New York, they were hard-charging associates at top New York City firms: Adiya at Debevoise & Plimpton and Erin at Paul, Weiss, Rifkind, Wharton & Garrison. But Erin was itching to return to Ohio, where he had grown up amid open, green spaces. He had a lead on a job with a client and he encouraged Adiya to apply for an in-house counsel position at Wendy’s, which is headquartered in Columbus. They relocated two years later; Erin is now general counsel for TS Tech Americas, Inc., a tier-one automotive supplier; Adiya left Wendy’s after nearly five years to become a beauty entrepreneur. She invented the ergonomic Yubi fingertip makeup brush and sponge applicator that Time magazine named one of the Best Inventions of 2018.

They now live on the outskirts of Columbus with a young son and daughter. Adiya says Erin provides indispensable counsel for her budding business. “He was taught at Columbia to be critical in his thinking, and when he makes a suggestion I know it is well-reasoned and not just something he’s saying on a whim,” she says. Erin appreciates being able to get Adiya’s professional advice any time of day or night. “It’s like having a law partner who is your partner in life,” he says. 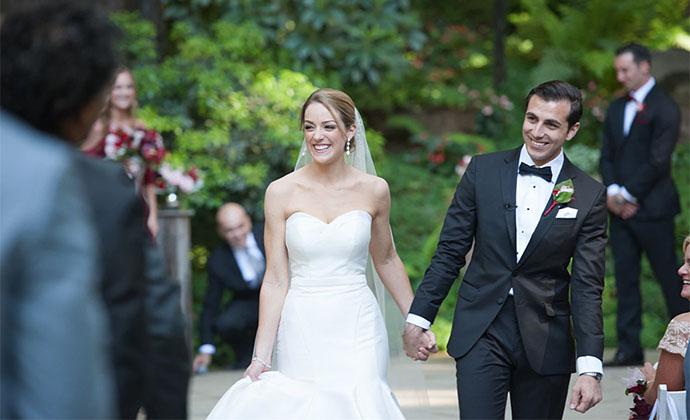 In the fall of 2015, Grace Davis ’16 was a 3L and president of the Student Senate when she met Ramsey Fisher ’18, a 1L who’d been elected to the Senate by his class. But they didn’t get to know one another until the spring semester, when Grace was a teaching assistant for Ramsey’s Contracts class. Ramsey says he was smitten. Their first date, at a cafe near campus, lasted five hours. They talked about favorite bands (Radiohead and Coldplay) and debated whether Star Wars: Episode V The Empire Strikes Back is better than Star Wars: Episode VI Return of the Jedi. 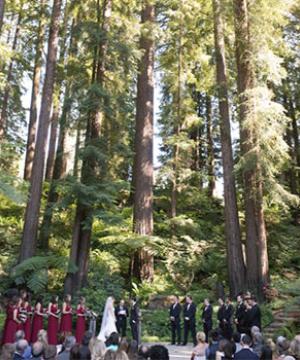 After Grace graduated and joined a law firm in Dallas, their relationship blossomed long distance. One year after that initial coffee date, they returned to the same cafe and Ramsey proposed on bended knee. Shortly after his graduation—where he delivered a short speech as Student Senate president (following in Grace’s footsteps)—they were married in June 2018, in Los Gatos, California, surrounded by towering redwoods and many Columbia Law friends.

Ramsey joined Grace in Dallas, where they are now clerking for the U.S. District Court for the Northern District of Texas and the U.S. Court of Appeals for the 5th Circuit, respectively. “The best thing about being married to another lawyer is that we can talk to each other without having to explain the basics,” says Grace. “The worst part is that sometimes silly banter can turn into something closer to a mock trial. We still haven’t figured out who the better lawyer is!” 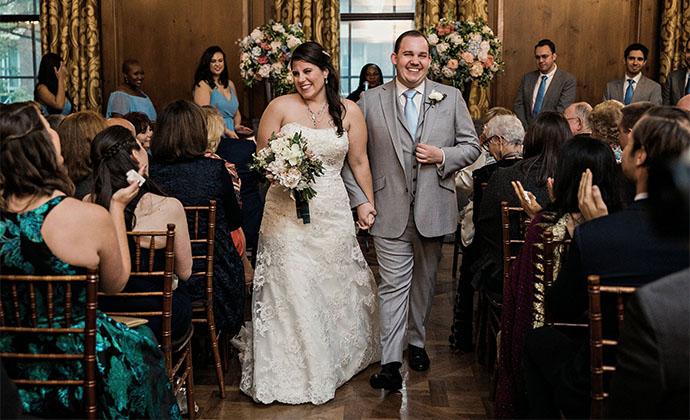 On the night before orientation at Columbia Law School, Fiona Finlay-Hunt ’14 and Joshua Tarrant-Windt ’14 met at a trivia night hosted by a restaurant in Morningside Heights. They soon discovered that they were not only assigned to the same Contracts, Legal Methods, and Torts classes, but they also lived in the same Columbia-owned apartment building. “It was very convenient when we started dating a few months later,” says Fiona. “He spent every night in my apartment.” The couple had a healthy academic rivalry. “He got better grades most of the time, but I beat him in a couple of classes—my highlight of Law School,” she says with a resounding laugh. 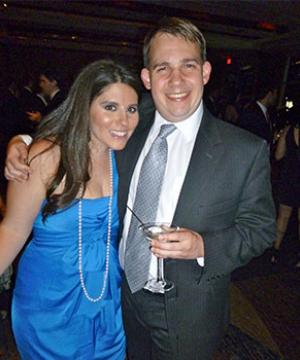 Even before they started dating, Fiona invited Joshua, who came to Columbia from Australia, for a traditional Thanksgiving dinner at her mother’s house in a northern New York City suburb. She introduced him to her thoroughbred horse, Jack. As she told The New York Times for a “Mini-Vows” column, “Jack bonded with Josh as soon as they met. . . . Once I was able to see that Jack really liked him, I knew Josh had to be a good egg, and from that night on, we were inseparable.”

Fiona, who is an in-house counsel at Google, and Josh, who is a lawyer with Vladeck, Raskin & Clark, which specializes in employment law, were married in May 2018 at Manhattan’s Harold Pratt House, which is headquarters for the Council on Foreign Relations. “We liked that because we were conducting an international relationship ourselves,” says Josh.