Robert Klieger remembers a time when “downloading” a song meant putting his cassette tape recorder face to face with his standalone radio, hitting the ‘Record’ button, and hoping the DJ didn’t talk over the music.

Mr. Klieger is now an entertainment and IP litigator at Irell & Manella, with a client list full of media companies in crisis. Music, movies, and TV have gone digital, and new technology gives consumers the ability to make and distribute an infinite number of perfect copies, a far cry from Klieger’s ad hoc home studio. 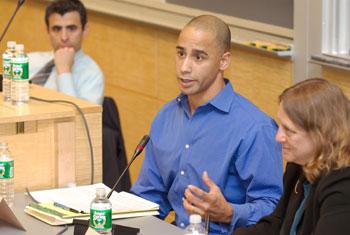 The makers of those new platforms were conspicuously absent from the panel, which came just two weeks after Viacom filed a billion-dollar copyright suit against video-sharing website YouTube in the Southern District of New York. Viacom Senior Vice President and Deputy General Counsel Mark Morril ’72 says his company tried hard to come up with a YouTube licensing deal, but negotiations fell through in February because YouTube was “clearly not willing to pay fair value for content, or filter for copyright,” he said.

Google Inc. paid $1.65 billion for YouTube in November, based in large part on the advertising revenue it would gain from the site. Users can easily upload their own videos, many of which contain copyrighted material. Until Viacom filed a Digital Millennium Copyright takedown notice in February, clips from The Daily Show and The Colbert Report, both on Viacom subsidiary Comedy Central, made up “a large double-digit percentage of content on YouTube,” said Mr. Morril.

Under the provisions of the Digital Millennium Copyright Act (DMCA), copyright owners can protect their content by notifying a service provider about infringement and demand that their content be removed. The takedown remedy greatly increases the likelihood of success because seeking recourse against the actual infringer, usually a single person, is often ineffective. DMCA’s “Safe Harbor” provision protects Internet service providers from copyright liability as long as they respond quickly to takedown notices from content owners. YouTube took down more than 100,000 videos within a few days of notification.

Viacom, however, claims that Safe Harbor does not apply in YouTube’s case because the site earns money from advertising that runs next to Viacom’s copyrighted content. Providers are not protected by Safe Harbor if they “receive a financial benefit directly attributable to the infringing activity.”

In his presentation on the DMCA, Mr. Klieger said YouTube was more of a content service than an access service like AOL, which is protected. Mr. Morril agreed, but turned around and criticized the DMCA itself: If a giant like Viacom is forced to hire a team of lawyers just to send thousands of takedown notices on a regular basis, how is the little guy supposed to protect his content? he asked.

“Though Viacom seems unable to determine what constitutes infringing content, its lawyers believe that we should have the responsibility and ability to do it for them,” he wrote. “Fortunately, the law is clear, and on our side.”

There wasn’t all bad news for content providers. The Warner Music Group struck a licensing deal for its music videos and TV shows with YouTube in October, following eight months working together to find a viable business model, said Elliott Peters ’95, the company’s vice president, senior counsel, and head of digital legal affairs. He explained that digital downloads and web sites like YouTube present content companies with a business challenge, in addition to the usual challenge over rights. On the business side, companies are forced to expand their horizons.  Warner, for example, put out 418 different products tied to one new album from a Korean singer, including CDs, downloads, and ring tones. In the end, mobile phone-based products accounted for more than 50 percent of sales.

Prof. Ginsburg warned the panel that her students were largely hostile to Viacom’s suit in class. During Q&A, audience members in the crowded room questioned Viacom’s motives and methods, and they speculated that, at best, the company could only expect a Pyrrhic victory as hundreds of smaller YouTube imitators sprout up offering pirated movies and music. Mr. Morril was sanguine.

“Content filtering isn’t perfect, and we’re not asking for perfection. We’re asking for effort, and YouTube is making none,” he said.

Irell & Manella sponsored the event, which was presented by the California Society of Columbia Law School, and the Entertainment, Arts, and Sports Law Society.

John Bringardner is a staff reporter for IP Law & Business.