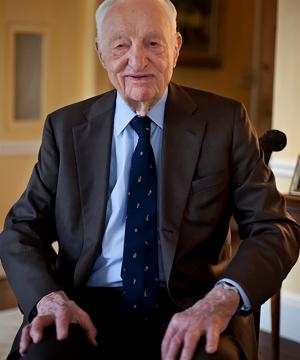 William S. Beinecke ’40 was a catalyst for cultural growth and environmental protection in the New York City community for over 70 years. The sprawling greens and natural beauty of Central Park can be attributed to Beinecke, who became the first chairman of the Central Park Conservancy upon recognizing, as he later wrote in his memoir, its “state of disrepair and decay.” In addition to being a renowned philanthropist, Beinecke served as a lieutenant commander in the Navy during World War II, where he earned the Bronze Star. In 1959, after becoming general counsel at the Sperry & Hutchinson Co. and then president, CEO, and chairman of the board, Beinecke founded the Prospect Hill Foundation, alongside his wife, Elizabeth Gillespie.

A 1936 graduate of Yale College, where he earned a bachelor’s degree in economics, Beinecke is largely responsible for the creation of the Yale School of Management. A firm believer that corporations have a duty to support the communities they serve, Beinecke believed a business school could help to instill a sense of social responsibility into young students preparing to work in corporate firms.

Each year, Columbia Law School students and staff had the pleasure of meeting Beinecke during his annual scholarship luncheon. A kind, warm, and generous individual, Beinecke’s wish was that the students he supported would experience great success, and live long and prosperous lives.