The Raphael G. Scobey Loan Repayment Assistance Fellowship is awarded to Columbia Law School graduates who demonstrate financial need and are seeking to do public service, community, or social justice work upon graduating. 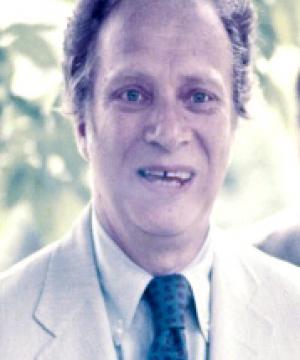 Raphael (“Rafe”) G. Scobey ’51 was a World War II veteran given the opportunity to attend Columbia Law School through the G.I. Bill of Rights. He served as a prominent entertainment lawyer in New York City for nearly four decades. Throughout his life, Scobey was actively involved in progressive political causes, including anti-war and civil rights work.

Scobey was born in 1917 in Pennsylvania to a working-class family in Bethlehem, Pennsylvania. He attended Liberty High School and enrolled in Lehigh University upon graduating. Scobey displayed an interest in intellectual argument early in his academic career, serving as the freshman year representative of the Debate Team for Lehigh during his first year, and remaining as an active participant through his undergraduate studies. His intellectual curiosity was never confined to the law, however, and Scobey was also involved with the International Relations Club, the Lehigh Forum, and Phi Beta Kappa, the oldest and most prestigious honor society in the nation. He also served as president of Delta Omicron Theta, and of the Robert W. Blake Society. The combination of Scobey’s work ethic, intelligence, and humaneness made him a natural leader.

After receiving his degree from Lehigh, Scobey enlisted in the army in 1942 as a private, and remained in service for the duration of World War II. Through the G.I. Bill of Rights he was given the opportunity to attend Columbia Law School where he was a Harlan Fiske Stone Scholar, a Phi Delta Phi member, and executive chairman of the Moot Court Committee. Upon graduating from the Law School, Scobey joined the law firm Marshall, Bratter, Greene, Allison & Tucker, where he became a partner in 1955 and remained for almost thirty years. He then joined Battle Fowler as a partner in 1981, where he founded the entertainment department and remained until his death in 1989.

He married his wife Joan Scobey in 1953, with whom he would eventually have two sons: David and Richard. For the rest of his life, Scobey proudly attended Columbia Law School reunions, and remained mindful of the influential role that the Law School played in his eventual success as a lawyer. 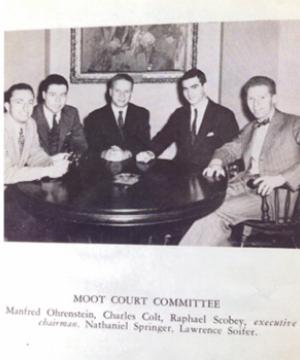 Scobey always managed to create opportunities for himself to explore his many passions. Upon marrying and moving out of the city to Scarsdale, he began teaching undergraduate legal studies at Manhattanville College. In addition, he was a founder, first president, and board member of the Creative Arts Rehabilitation Center, a New York City organization providing arts therapy to individuals with mental illnesses, and he was on the board of Circle in the Square Theatre. His career as an entertainment lawyer and involvement with numerous media outlets and advertising agencies allowed him to get to know and work with icons such as Garry Moore, Dick Van Dyke, and Merv Griffin.

Raphael Scobey’s devotion to his family, professional integrity, and passion for the art of citizenship make him a noteworthy alumnus of Columbia Law School.

The Raphael G. Scobey Loan Repayment Assistance Fellowship was created by his wife and sons in 2014 to honor his memory. These fellowships are awarded to Columbia Law School graduates who demonstrate financial need and are seeking to do public service, community, or social justice work upon graduating.