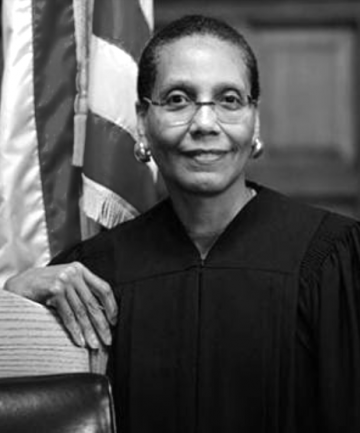 Judge Sheila Abdus-Salaam ’77, the first African-American woman to serve on the New York State Court of Appeals, set an example for generations for her brilliance, moral conviction, and remarkable professional achievements and for her qualities of kindness, modesty, and understated yet unfailing generosity. A pioneer with “an unshakeable moral compass,” in the words of Gov. Andrew Cuomo, Abdul-Salaam was appointed to New York’s highest court in 2013.

Raised in Washington, D.C., the only one of seven siblings to graduate from college, Abdus-Salaam realized her childhood dream to become a public interest lawyer. She worked as a public defender, for the New York Attorney General’s Civil Rights Division, and for the city of New York, enforcing fair employment laws on contractors and companies that did business with the city. In one of her first cases, she won an anti-discrimination suit on behalf of women bus drivers who had been passed over for promotion.

Those experiences informed her service as a judge in civil and criminal courts. “A lot of the defendants—both men and women—reminded me of my own relatives and the people I grew up with,” she said in 2003. “As a judge, I do my best to make sure people in my courtroom are treated with respect, that they are heard and that they get a fair trial.” She served as an associate justice on the First Appellate Division of the State Supreme Court and as a State Supreme Court justice in Manhattan before rising to the state’s top court. In 2016, she wrote a trailblazing ruling that gave legal standing to nonbiological parents in unmarried relationships, overturning a 25-year-old ruling that denied rights to many gay parents raising children.

A dedicated alumna of Barnard College and the Law School, Abdus-Salaam often returned to Columbia for Law School events such as the Empowering Women of Color conference. She was a member of the Board of Visitors for over a decade and in 2013 received the Law School’s Lawrence A. Wien Prize for Social Responsibility. Throughout her career, she served as a mentor and inspiration to young women of color, law students and public-interest lawyers.

In 2017, Abdus-Salaam’s husband, Rev. Gregory Jacobs, and her family, friends and classmates from the Class of 1977 established a memorial fund in her honor. In 2019, in consultation with her family, the fund became an endowed fund. The Sheila Abdus-Salaam Public Service Internship Fund supports guaranteed summer funding for Columbia Law School students who are pursuing public service internships as part of their legal education.