The Joan Guggenheimer Scholarship was created in 2006 through the generosity of the JPMorgan Chase Foundation under the direction of Kimberly B. Davis. 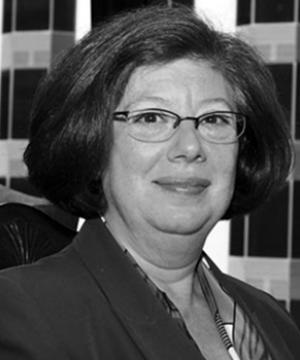 Joan Guggenheimer ‘79 fought gender discrimination in corporate America while earning a respected place for herself in its boardrooms. A member of Columbia Law School’s Board of Visitors, her legal career spanned nearly 25 years, including serving as chief legal officer of Bank One and JPMorgan Chase, and co-general counsel of Citigroup. She was a graduate of Binghamton University and an editor of the Columbia Law Review.

Born 1952 in Queens, New York, Guggenheimer began her career with a clerkship in the U.S. Court of Appeals for the Second Circuit. In 1985, she joined the legal department of Smith Barney and was promoted to deputy general counsel in 1993 and then to general counsel of institutional businesses in 1995. A year later, Smith Barney was hit with a class action lawsuit alleging sexual harassment and discrimination. Among 20,000 plaintiffs were 20 from Smith Barney, who claimed that male employees in one office ran what they called a “boom boom room,” where they drank Bloody Marys from a barrel and routinely subjected women to lewd pranks. The challenge prompted Guggenheimer to examine the larger situation of gender in the workplace, resulting in a settlement that benefited both plaintiffs and the company and in the creation of the diversity committee.

The Joan Guggenheimer Scholarship was created in 2006 through the generosity of the JPMorgan Chase Foundation under the direction of Kimberly B. Davis. It is awarded annually to outstanding Columbia Law School students who embody Guggenheimer's intellectual spirit and personal dedication to life, work and community.