Media Contact:
Public Affairs Office, 212-854-2650 [email protected]
New York, Nov. 29, 2010—In New York City Criminal Court in Queens, a domestic violence trial is about to start.
At the defense table is a man charged with misdemeanor assault and unlawful imprisonment. Despite repeated offers, he refused a plea bargain, so the judge is hearing opening arguments in the non-jury trial from prosecutor Jamie Gottlieb—who also happens to be a third-year student at Columbia Law School.
Gottlieb ’11  is one of 14 Law School students  taking part in a domestic violence prosecution externship where they may handle upwards of 60 misdemeanor assault cases at the Queens County District Attorney’s Office.

Students from the Domestic Violence Prosecution Externship with Queens District Attorney Richard Brown (center) and Assistant District Attorney Scott Kessler, who runs the externship.
“I really never expected that one of my cases would go to trial. It was really exciting that one of them is,” she said. “It’s exhilarating just to be able to stand up in front of a judge and ask a witness questions.” 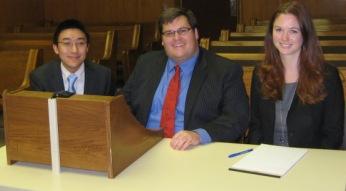 While they are not formally assistant district attorneys, the students handle cases in much the same way that ADAs do, under a special order from the Appellate Division of State Supreme Court, Second Department.

The externship, which is being offered for the first time this fall, enables third-year students to see a case through from its inception—perhaps starting just hours after an arrest is made--to when there is a plea bargain or, less often, a trial. They receive ample guidance from experienced ADAs; however, the cases assigned to the students are theirs to oversee.
“It’s been amazing. It’s probably the best experience I’ve had in law school,” said Diego Diaz ’11, who plans to become a prosecutor when he graduates. “It’s amazing how much we’ve learned and how much of an impact we can have.”
The program was launched by Lecturer-in-Law Scott Kessler, the domestic violence bureau chief in the Queens D.A.’s office, who said the externship was inspired two years ago by a “student movement” born from Columbia’s requirement of 40 hours of pro bono service as a requirement for graduation. Several students did their pro bono work in Kessler’s office.
“What we found was after the 40 hours, the students didn’t leave. They didn’t want to go,” Kessler said. “They were in the middle of their cases. They loved coming here. We said we really need to go beyond the 40 hours.”
Kessler (right) began talks with the Law School to create an externship, which would also include a classroom component where students would learn trial advocacy skills. He worked on the curriculum with professors Daniel Richman and Philip Genty. 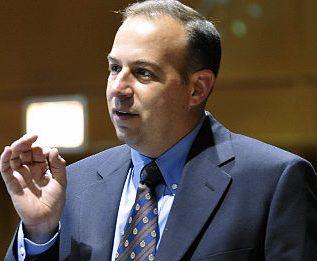 “I jumped at the opportunity,” said Richman, the Paul J. Kellner Professor of Law. “There is certainly broad and deep student interest in domestic violence prosecutions. It also gives students the opportunity to see some of the ugliest, toughest cases in the criminal docket.”
Kessler has gained national attention for his innovative and aggressive approaches toward going after accused batterers, which has resulted in a 62 percent conviction rate, compared to 33 percent elsewhere in New York City.  One tool in his formidable arsenal has been the use of evidence-based prosecution, where his office can take a case to trial without the victim’s cooperation.
“We became tired of having victims get beaten, come in, sign forms and cases got dropped,” Kessler (right) said. “We figured out ways to prosecute cases using 911 tapes, first statements to police, medical records, and ear or eyewitnesses. Students do a lot of evidence-based prosecutions where we never call a victim to the stand, but convince a judge or jury that a defendant is guilty beyond a reasonable doubt.”
It’s a controversial approach, but Jessica Soto ’11 found it may be the only way to ensure justice, as many victims do not want to press charges. “A lot of people can’t get out of certain situations,” she said. “You become a voice for that person.”
Going through that process can also lead to a change of heart. Police now take digital photos of injuries that ADA’s can readily access, which Mayte Rivera ’11 LL.M. said helps victims realize the gravity of what happened to them.
“That moment when you confront the victim with a picture, it’s just magic,” Rivera said. “Then they’ll rethink the moment and that it’s true, he hit me.”
At the same time, Genty noted, students must remember they ultimately represent the state, not the victim, even if the interests of both appear to go hand in hand. “Students are seeing that domestic violence is not just a family issue, but a criminal court issue,” he said. “They’re seeing that a lot of the work is trying to use the threat of criminal sanctions as a way to make the family function more effectively.”
That could mean a guilty plea or conviction will not result in prison time. Instead, defendants may be directed to anger-management classes, batterer-intervention programs, and parenting classes to prevent future incidents. “It’s incredibly fulfilling that we can have that impact on a family,” Diaz said.
The students work out of the Family Justice Center in Kew Gardens, a new facility Kessler had a hand in designing to include dedicated workspace for the externs (right). It also serves as a one-stop shop for domestic violence victims. Under one roof, a victim can meet with prosecutors, and also have access to social services organizations that provide assistance with housing, placement in a shelter, vocational training, and psychological treatment. 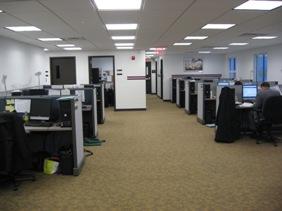 The center also has a playroom staffed by social workers where victims can leave their children while they are interviewed. It has non-violent toys and equipment donated by the Joe Torre Safe at Home Foundation, a charity founded by Torre, the former New York Yankees manager, who grew up in an abusive household.
“What we find is that it’s easier for the interview process if the child can wait,” Kessler said.
The center is at the heart of the most ethnically diverse county in the nation, where more than 160 languages spoken. While the D.A.’s office has access to interpreters for virtually all of those languages, many students are bilingual. That can take some victims by surprise. “One woman came in and jumped. She said ‘I thought you were Chinese on the phone,’” said Steven MacArthur ’11, who is decidedly not Chinese, but fluent in Mandarin after six months in Beijing during college.
That connection can also be crucial in getting a victim to cooperate, MacArthur added. “The fact that they see someone who’s working to understand them and not just get them to sign a document, but to hear their story and what they want, is important.”
MacArthur plans to become a prosecutor after graduation. However, most students, like Jonathan Friedman ’11 have different career trajectories. Friedman will start next fall as a litigation associate at Skadden Arps, but said students will emerge from the externship as better lawyers, no matter what they do.
“One thing I will take away from this is the confidence I’ve been able to build and will continue to build,” Friedman said. “At some point in every law student’s life, you begin to recognize yourself as a lawyer. I think building that confidence has been a key part of this.”
# # #
Columbia Law School, founded in 1858, stands at the forefront of legal education and of the law in a global society. Columbia Law School joins its traditional strengths in international and comparative law, constitutional law, administrative law, business law and human rights law with pioneering work in the areas of intellectual property, digital technology, sexuality and gender, criminal, national security, and environmental law.
Visit us at http://law.columbia.edu
Follow us on Twitter http://www.twitter.com/columbialaw