Media Contact:
Public Affairs Office, 212-854-2650 [email protected]
New York, July 1, 2010—When it comes to resolving commercial legal disputes, the gap between how that is done in China and the U.S. continues to narrow.
That is one objective of a program at Columbia Law School, where dozens of Chinese judges come to learn about the American legal system and the common law system to prepare to hear cases involving the thousands of foreign companies doing business in China..
The one-month program, which concluded in June, combined classroom instruction along with visits to meet top U.S. judges, including Supreme Court Justice Ruth Bader Ginsburg ’59 (right). 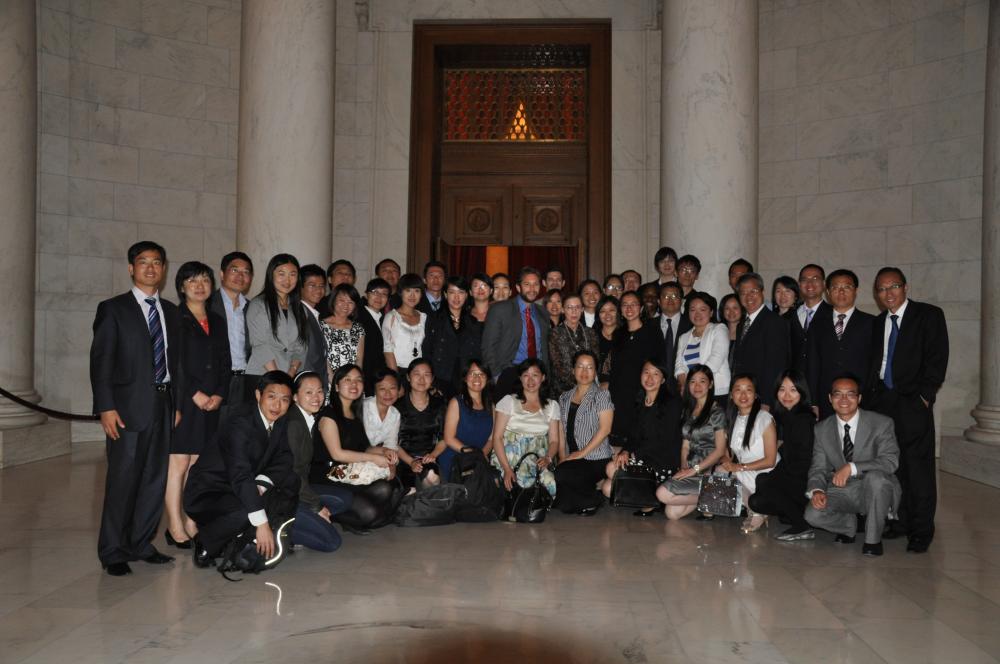 “The [Chinese] judges get to see the theoretical side of things in a classroom setting, and then see how it plays out in real life,” by visiting local courts, said Vincent DeLuca, Director of International and Comparative Law Initiatives.
The Law School hosted 30 judges and 14 LL.M students who hail from approximately 22 Chinese provinces. The sessions were part of an LL.M. program at the City University of Hong Kong. This year’s participants faced a tougher application process than their predecessors, including more stringent language requirements. All classes and review sessions were held only in English. Previously, review sessions were held in Mandarin.
The academic portion, run by the Law School’s Office of International Programs, included Civil Procedure taught by Suzanne Goldberg, Clinical Professor of Law; Corporations with Katharina Pistor, Michael I. Sovern Professor of Law; and Torts with Benjamin Liebman (below), Director of the Center for Chinese Legal Studies. 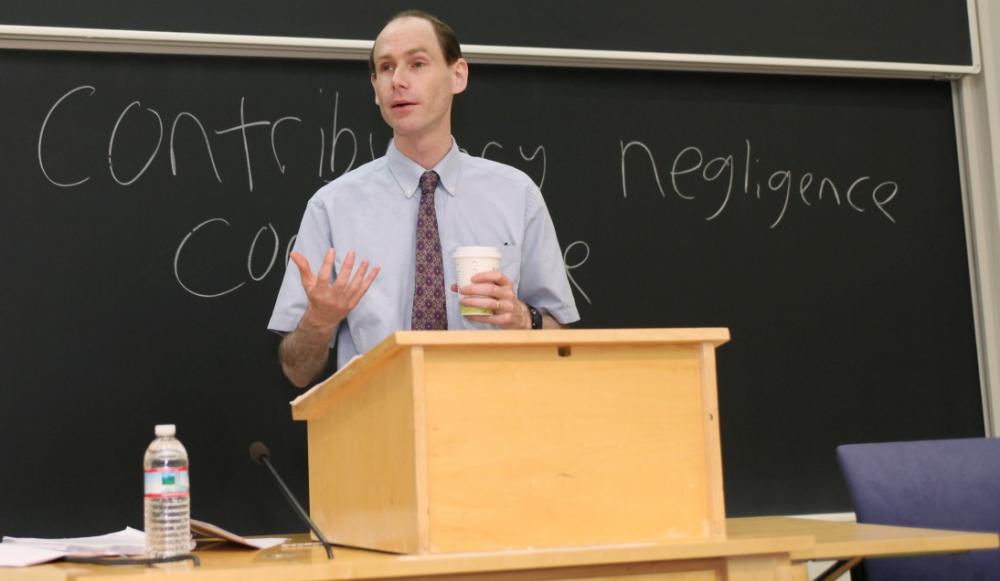 A common theme was the difference between common law, the basis of the American legal system, and civil law used in China. In the U.S., judges are given more independence to interpret law on an individual basis, while Chinese judges are encouraged to enforce the government’s views.
Ying Sun, a participant and judge from Beijing, said, “While we have studied common law in the classroom [at City University of Hong Kong], it is very different to go here and to see how common law is practiced and how it has developed.”
To supplement their class work, the judges had weekly visits with U.S. judges, including Ginsburg, whom the judges met at the Supreme Court.
Ginsburg spoke about the balancing act necessary to maintain the rule of law in the face of the many external pressures encountered by the judiciary. Afterwards, she took questions about the U.S. legal system, the Supreme Court, and her own views.
Sun described the experience as “really very impressive…it will be a cherished memory.”
The judges also met with Judges Gerard Lynch ‘75, and Robert Sack ’63, who are both on the U.S. Court of Appeals for the Second Circuit and teach at the Law School.
Lianqiu Li, a judge from Jiangsu province, said the visits offered opportunities for the Chinese judges to pick their hosts’ minds and also offer their own perspective.
“It is an equal exchange,” Li said. “It is a good chance to exchange ideas and opinions.”
That opportunity can be especially invaluable to judges in China, who train to become judges, without first practicing as a lawyer or becoming a law professor.
The judges hear disputes with foreign companies, which have become more common as China’s booming economy attracts international companies, many based in the U.S.
In a visit to Hong Kong this winter, DeLuca encountered several alumni from last year’s program. Many have changed how they view cases because of what they learned about the U.S. legal system, he said.
Indeed, Li said the connections she made with Law School faculty will be valuable in other ways. “I met some great professors who I plan to keep in touch with in case I come across a difficult situation when I return to China.”
Columbia Law School, founded in 1858, stands at the forefront of legal education and of the law in a global society. Columbia Law School joins its traditional strengths in international and comparative law, constitutional law, administrative law, business law and human rights law with pioneering work in the areas of intellectual property, digital technology, sexuality and gender, criminal, national security, and environmental law.
Visit us at http://law.columbia.edu
Follow us on Twitter http://www.twitter.com/columbialaw