The student organization was chosen for its excellence in organizing debates and speeches on topics such as health care reform, birthright citizenship, and same-sex marriage, as well as for its enrichment of the intellectual diversity of the Law School community.  By the end of this academic year, the group  will have hosted approximately 40 student events, debates, and panels dedicated to public policy issues.

Trevor W. Morrison, Professor of Law and a leading constitutional law scholar, has participated in and moderated a number of these events.  "This is a terrific, well-deserved honor for the Federalist Society's Columbia chapter,” he said.  “The excellent events the chapter has organized over the last several years have greatly enhanced the intellectual life of the Law School."

In 2006, the Columbia chapter hosted the Federalist Society’s 25th Annual National Student Symposium, where professors and judges discussed and debated the topic of international law and the state of the Constitution before an audience of 1,200 law students from across the country.

Columbia Federalist Society’s president, Jonathan Berry ’11, accepted the award on behalf of the chapter.  "This award would not have been possible without the hard work of the many chapter officers who take time out of their studies to put on events for the edification of the Columbia Law School community," he said. "The Federalist Society is dedicated to promoting the intellectual diversity of the legal profession, something we hope we've been doing here at CLS."

Begun in 1982, the Federalist Society Student Symposium is an annual event for the Federalist Society. U.S. Supreme Court Justice Clarence Thomas delivered the keynote address, the first time a sitting Supreme Court justice filled that role in the 30-year history of the symposium.  Justice Thomas personally congratulated the Law School students, and posed for photos. 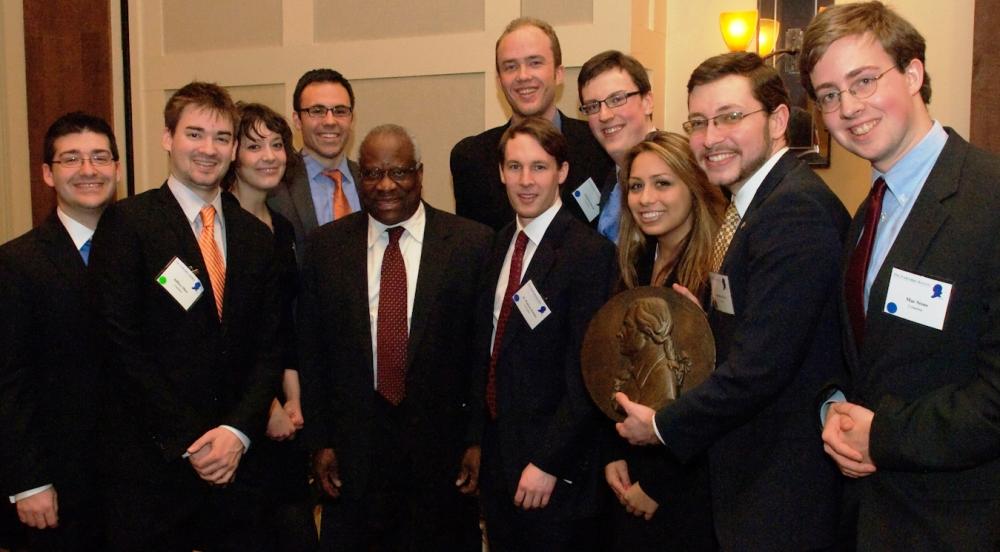