September 18, 2007 (NEW YORK) -- Concern about the erosion of individual rights permeated presentations by Columbia Law School faculty participating in a panel discussion on the U.S. Constitution. The event, held on September 17, 2007, commemorated the 220th anniversary of the Constitution's signing.

“Although crime is down, police violence is increasing in every city in the country,” said Professor Katherine Franke, co-director of the Center for the Study of Law and Culture. She cited a 15-fold increase in complaints to the New York City Civilian Review Board in the past 10 years, from 4,000 to 61,000 annually.

Constitutional protections against unreasonable searches and seizures, self-incrimination, cruel and unusual punishment, as well as the preservation of due process are all in jeopardy in a society in which even the U.S. Supreme Court has granted qualified immunity to police officers accused of engaging in inappropriate conduct, she added.

“The [police] officer can say, ‘It was reasonable for me to act unreasonably,’” said Franke. “That rule is eating up the entire Constitution.”

“The [U.S.] government’s position is that the Constitution doesn’t apply to foreign nationals at Guantánamo,” she said, adding, “I’ve never found a clause [in the Fifth Amendment] that says it only applies to U.S. citizens.” In territory under U.S. control, fundamental constitutional rights apply, she added.

The three other panelists focused on the threat to constitutional rights in their respective areas of research. Professor Suzanne Goldberg, who directs the Sexuality and Gender Law Clinic, discussed the Supreme Court’s recent interpretations regarding issues of sexual behavior and gender; Alphonse Fletcher Professor of Law Jack Greenberg ’48 outlined the Court’s decision in cases regarding the consideration of race in the composition of public school enrollment in Seattle and in Louisville; and, finally, Philip Hamburger, Maurice and Hilda Friedman Professor of Law, addressed his remarks to the controversial idea of just how broadly constitutional interpretation stretches to protect individual rights. This notion, called “elasticity,” is a two-edged sword, he cautioned. In a given case, an elastic interpretation can expand some liberties while contracting others. 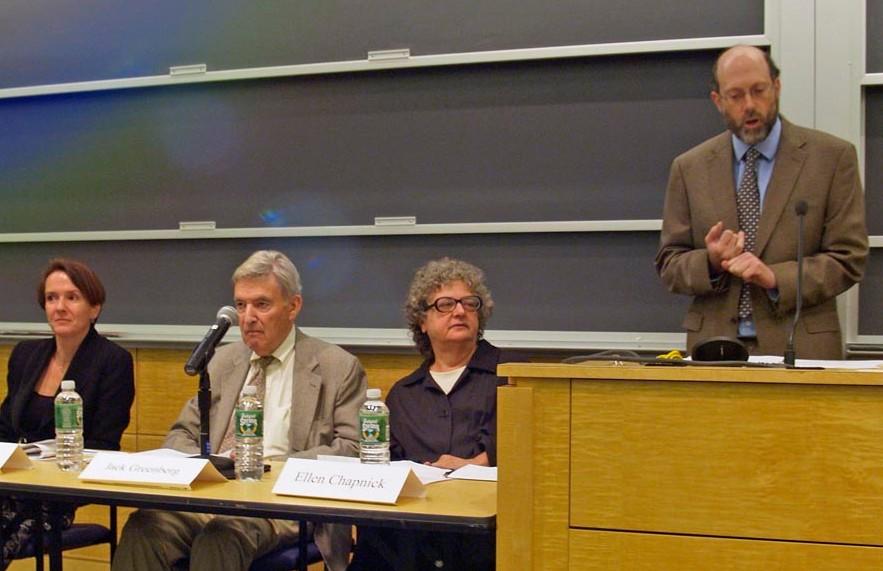 Professor Philip Hamburger discussed the controversial notion of elastical interpretation of the U.S. Constitution.  To his left are  Professors Sarah Cleveland and Jack Greenberg and moderator Ellen Chapnick. 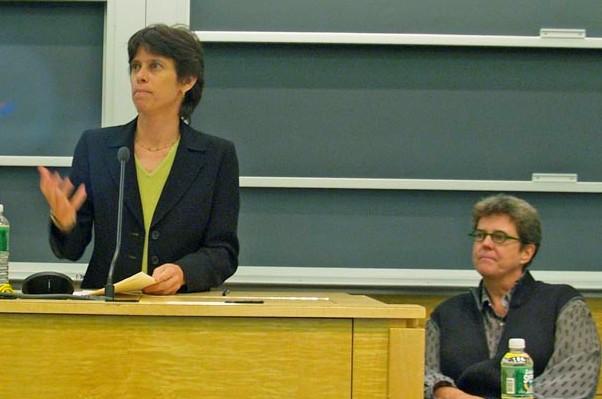