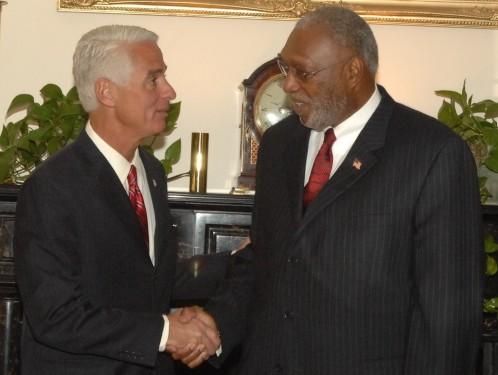 “I am confident Judge Perry will rule with restraint, fairness and humility,” says Crist (above, left, with Perry). “He has shown throughout his personal and professional life the ability to balance justice with humanity.” Perry is the fourth African-American justice to serve on Florida’s Supreme Court.
A North Carolina native, Perry has lived in Florida for nearly four decades. He served as a first lieutenant in the United States Army from 1966 to 1969, and decided to go to law school the night Martin Luther King was assassinated. Shortly after graduating from Columbia Law School, Perry moved to Augusta and took the Georgia Bar exam with 50 other African-Americans. Not one would be accepted.

After seeking advice from his Columbia Law School Professor Jack Greenberg, Perry persuaded 16 of the 50 to join a discrimination suit. Within three months, 11 of them would pass. By the next sitting, 13 more African-Americans were admitted to the Georgia Bar. Ironically, Perry’s suit would be dismissed, but, practically speaking, it ushered in a new day. In less than one year, African-American membership to the state’s bar doubled.
“We really began to transform Georgia,” said Perry, who modestly gives credit to Columbia Law School. “I was well prepared and I wasn’t afraid.” He says then-Dean Benno Schmidt’s Common Law class provided the judicial philosophy that still informs his decisions. “He taught us to demystify the language of the law so that it is understandable to everyone. ‘If it doesn’t make sense,’ he said, ‘it probably isn’t a law.’ ”
Perry served as vice president and general counsel for the Seminole Employment and Economic Development Corporation from 1974 to 1976. He then went into private practice for 21 years, as a partner and senior partner at various Central Florida law firms. Perry was on the 18th Judicial Circuit serving Seminole and Brevard counties since 2000, when then-Governor Jeb Bush appointed him as the circuit’s first African-American judge. He oversaw the 49-judge circuit as chief judge for a two-year term beginning July 2003.
Perry was named the 2006 Outstanding Jurist by the Seminole County Bar Association, and received the Martin Luther King Jr. Drum Major Award for Social Justice in 2005. He also received the NAACP Humanitarian Award for Seminole County in 1995 and for Orange County in 1998. He is founder and president of the Jackie Robinson Sports Association, a baseball league that serves approximately 650 at-risk children and is the largest program of its kind in the country.
###

Columbia Law School, founded in 1858, stands at the forefront of legal education and of the law in a global society. Columbia Law School joins traditional strengths in international and comparative law, constitutional law, administrative law, business law and human rights law with pioneering work in the areas of intellectual property, digital technology, sexuality and gender, criminal, and environmental law.
Visit us at www.law.columbia.edu.