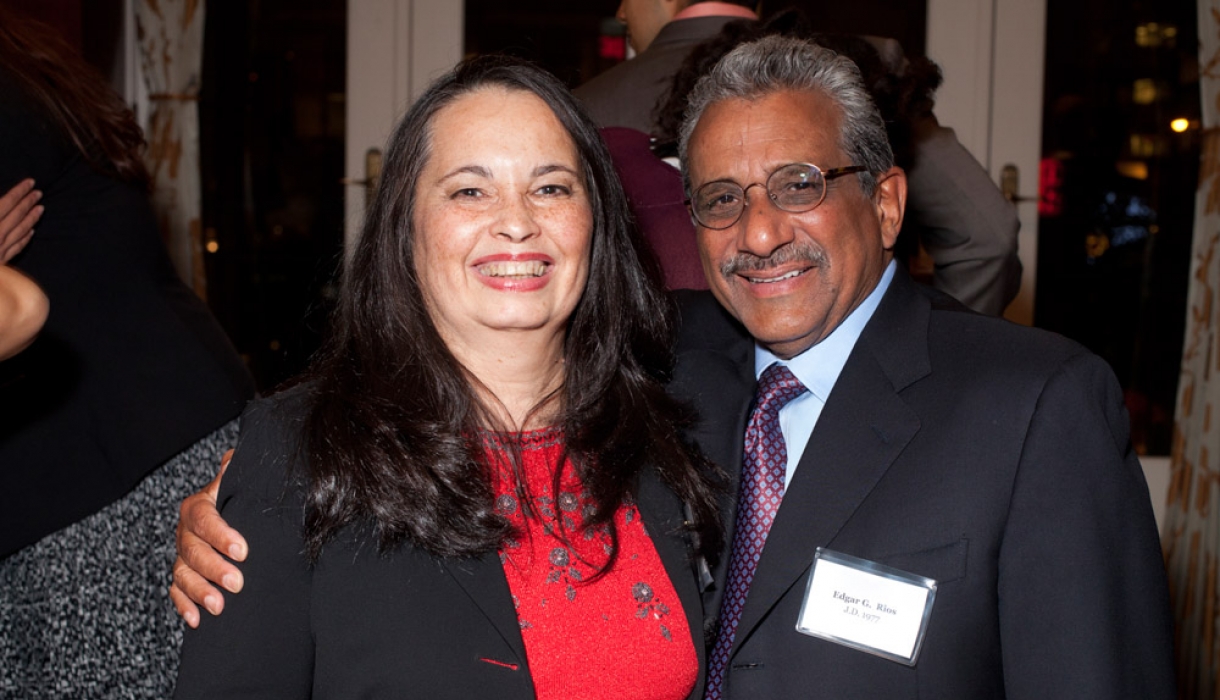 LaLSA Honorees Judge Dora L. Irizarry '79 and Edgar G. Rios '77
New York, October 29, 2014—Latino lawyers have a duty to serve their communities of origin and all disadvantaged populations, said honorees at the Latino/a Law Students Association’s (LaLSA) 10th annual Alumni Awards Banquet.
The banquet recognizes the dedication and vision of Latinos in the legal community, honoring one person each from the private and public sectors. Edgar G. Rios ’77, co-founder and chief executive officer of Spotted Hawk Development, and U.S. District Judge Dora L. Irizarry ’79 of the Eastern District of New York received awards for their distinguished careers and tireless public service.
180 students, faculty, administrators, and alumni packed this year’s special 10th anniversary celebration, held Oct. 16 at the Manhattan Club, overlooking a scenic vista of midtown New York City.
Taj Emilio Tucker ’16, LaLSA’s social chair and vice banquet chair, introduced Rios, praising his “unfailing lens of social justice” and commitment to advancing communities of color.
“I, by the grace of God, with the compassion of many, and the benefits of affirmative action, was able to persevere and overcome the odds,” said Rios, whose career has included practicing law, co-founding AmeriChoice Corporation to provide health care services to beneficiaries of public aid programs, overseeing a company that leases mineral rights on tribal lands in North Dakota, and establishing the Los Padres Foundation to boost low-income Latino youth in New York and New Jersey.
“As Latino professionals, we have benefited from those who have come before us and we have a responsibility to continue to advance the community,” Rios said.
Judge Irizarry was introduced by Nicole Z. Gonzalez ’16, LaLSA’s banquet chair, who singled out her “fierce passion” and trail-blazing career as the first Hispanic woman appointed to the New York State Court of Claims, to sit in Kings County Supreme Court, and to serve in the Eastern District of New York.
“I came from low economic circumstances, but what we had was strength of family and those few people who put in the time to visit a classroom and say ‘si se puede, yes you can, why not, why not?’” said Irizarry. “We need to establish a pipeline as far back as elementary school, because that’s where the dreams begin to get shot down.”
LaLSA Vice President Sara E. Cendejas ’16 and Yadira Ramos-Herbert, Columbia Law School’s director of academic counseling and student outreach, also spoke to the gathering. Luis Gabriel Hoyos ’16, president of LaLSA, wrapped up the evening.
“This has been a tough year for Latinos,” Hoyos said, citing continuing enforcement of immigration laws and proposed measures to require identification to vote. “Our communities are under siege and our future is on the line. Given this disheartening state of affairs, it may sound hard to celebrate, but the reasons to celebrate are sitting there among you.”